Can The Finance Minister Address The Economy That Is In Crisis?

Newly appointed Finance Minister Bishnu Paudel has said that the country's economy is in the midst of a crisis. 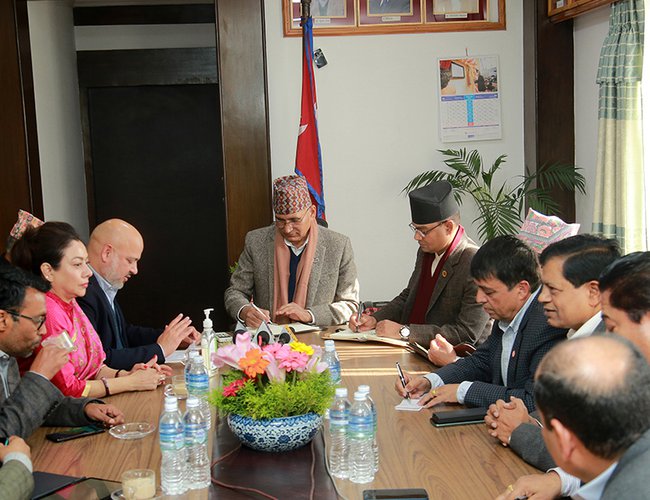 Finance Minister Paudel himself is a non-economist. He has no experience other than holding the Ministry of Finance twice. However, in Nepal, the finance minister is an MP and the party does not need any qualifications other than kindness, love and affection from the party he is associated with . Skilled politicians can also run the economy but keep in mind that this is a technical ministry.

Newly appointed Finance Minister Bishnu Paudel has said that the country's economy is in the midst of a crisis. Taking charge of the Finance Minister recently, he said that he will return the economy which is facing challenges to a safe place by taking the opinion of everyone and the experience of the world. "I will find the cause of economic challenges, communicate effectively, identify them, and solve them," he says. He said that he will reduce current expenses, manage resources and take necessary steps to solve the problems of the financial sector.

Besides, the finance minister also said that he will work for the improvement of the economy without believing in bias. He said that since there are many big problems and crises in the economy, he will take initiatives to identify and solve the problems. He said that he would not make a long speech because the state agencies were looking at the economic problems deeply, but he would focus on identifying and solving them.

He also said that he came with the belief that the country's problems are not beyond control. He said that he came with the belief that it would raise the morale of everyone and that he would work with high morale because of the past success of how to solve these problems. He said that there is a question whether he can succeed in the third term or not and he does not believe in prejudice. 'I was a liberal, I have high respect for everyone, I facilitate performance', he said, 'while fulfilling the responsibilities defined by everyone, please do not compromise.

If the economy is unable to maintain its strength, the strength of the nation will be weak, we are not allowed to make mistakes.

He said that he has a deep interest in good governance and warned that he will not be tolerant against it. "Let's not listen to criticism, protest, and condemnation of the ministry's work and everyone's work, let's perform in such a way that common citizens appreciate it," he said.

Finance Minister Paudel is a Nepali politician, who is the vice president of Nepal Communist Party (UML). He is the former Deputy Prime Minister and Finance Minister of Nepal. To be a member of the House of Representatives elected from Parliamentary Constituency No. 2 of Ruppandehi District in the Federal Parliament Election held in 2074.

Sources say that the market experienced such an increase after about one and a half months. As the confidence of the market returned, the turnover exceeded two billion rupees.

At that time the NEPSE indicator reached 1880. After that, when the Maoist and Congress governments came to power, the capital market was very excited. Which was improved after CPN-UML took over the reins again. The market, which reached 1100, crossed 3000 points during the tenure of UML.

Especially when CPN-UML Chairman KP Sharma Oli was the Prime Minister and Bishnu Prasad Poudel was the Finance Minister, there is a record that the stock market was on the upswing. The Oli government appointed the current governor, Mahaprasad Adhikari.

In the House of Representatives in 1994, a person whose name we Palpali had not heard of, got 15766 votes and defeated Hari Prasad Nepal Nepali Congress. In 1999, he won the Patinidhi Sabha election from Rupandehi by a narrow margin, defeating Surya Prasad Shrestha who was a Congress figure.

In the same way, even in the elections of 2008, 2013, 2017, 2022, he was victorious, but it is not an exaggeration to say that his luck has shined for him because of the accusations of changing the position with the position regarding the transfer of the provincial position and the person who currently has a weak and beneficial position to be his opponent and his candidacy was canceled. .

Experts say that since the UML will handle the finances, the governor of the NRB will also play a supporting role. They expect interest rates and current capital loans to be addressed. But the analysts also argue that the stock market started falling due to the unpleasant policy of the governor officer 4-12.

Many investors believe that the current interest rate and current capital loan guidelines can be resolved by assuring the governor. Because of that belief, the market is expected to hold a bullish trend. Now the market needs confidence. With confidence, the finance minister who can coordinate with the governor will come, so the market is on the rise," said an investor.

Every time UML president KP Sharma Oli is in power, the stock market graph reaches all-time high. Experienced market experts say that this hope has rekindled in investors. During Oli's leadership, the stock market made an all-bullish record of 1,880 on July 1, 2073. Paudel was also the finance minister at this time.

When he took over the leadership in 2072, the market index was around 1,140 points. Immediately after he was relieved of his post, the stock market started to fall again.

After the UML won again in the 2074 election, enthusiasm returned to the stock market. Before that, the market, which had reached 1,880, could not sustain growth during the two successive leaderships of Maoist and Congress.

Along these lines, while working in other agencies including NEPSE, the general perception was that the Ministry of Finance is not a 'super' ministry and not even from the constitutional and legal point of view.

In his previous appointment, Finance Minister Bishnu Prasad Paudel had said that he would immerse himself in the Ministry of Finance and boost the economy. In the interests of entrepreneurs, businessmen and consumers of Nepal, they expect concrete and creative economic steps from the government. Helping entrepreneurs means helping workers.

Two-thirds of the total capital required by the economy is invested by the private sector. Currently, the need for private sector activism has been felt. The newly appointed finance minister has shown signs of addressing it.

Arrangements for providing loans at subsidized interest rates for the expansion of economic activities. Re-loaning It is mentioned in the procedures related to re-loaning that the National Bank will provide such amount to banks and financial institutions and borrowers and customers can take loans through those financial institutions.

According to the office of the Comptroller General of the Government of Nepal, the revenue collection from July to November is only around 3 trillion 27 billion. The government had to collect four trillion 64 billion rupees in revenue as per the target during this period.

Compared to the target, only about 70 percent has been collected. If the revenue is not collected according to the target, there is a risk that the government will face a serious financial crisis.

This financial year, the government has set a target of collecting 14 trillion rupees in revenue, but in the first five months, only about 23 percent of the annual target has been collected. The decrease in the demand for goods and services in the market and the decrease in economic transactions and leakages have not raised the government revenue as per the target.

If the current situation in revenue collection continues, it may be difficult for the government to manage current expenditure resources including salaries and allowances in the coming months. If such a situation occurs, the new government that has emerged from the election will fall into a serious crisis.

The government's targeted foreign subsidy has also not come as expected. This year, 55.46 billion foreign grants have been targeted, but only 3.42 billion have been received till November.

Along with revenue collection, there has also been a relaxation in the government's development-oriented capital expenditure. Until November, only around 34 billion has been spent on the capital budget.

The private sector is protesting against the NRB and the government with various demands. There is a demand from the private sector that the high bank interest rates should be reduced and the new guidelines for current capital loans should be postponed for the time being at least for two years.

In addition, the economy of some countries in the world is currently in recession. There are also signs of recession in Nepal. Bank interest rates and other reasons have led to a decrease in consumption this year due to higher prices. For this reason, the demand for consumer goods as well as construction materials has decreased due to lack of demand in the market. According to industrialists and businessmen, the contraction in demand has affected domestic production.

At present, production has been reduced by 30 to 60 percent of the industry's capacity. The impact of the import ban on some items and the instability in the domestic sector of the economy has affected the government's revenue collection. This year's target collection is less than last year. The revenue has not been able to cover the current expenses. As the revenue collection has decreased, the government has cut the budget for development projects.

Some opine he lacks good knowledge to give the right direction to the economy which is in trouble and pushed towards recession. Poudel did not have such problems when he was the finance minister in 2072 and 2077. He also got experienced employees in the Ministry of Finance. Now the situation is exactly the opposite.

Outgoing finance minister Janardan Sharma filled the finance ministry by bringing in inexperienced staff. In such a situation, Paudel, who has held the Ministry of Finance for the third time, has really started his test.

There should be a package of special facilities for tourism and hotel business. Demurrage and detention charges for goods arriving at border customs should be completely exempted. There should be a concessional arrangement in the interest rate of loans given by banks and financial institutions.

The current situation is that the government emphasizes on economic development without focusing on the target of financial deficit and the coordination between government and revenue collection and capital expenditure should not be seen. At the same time, it seems that public expenditure has to be met from the liquidity of development partners and the country. Government and public institutions should adopt a policy of zero tolerance for frugality without significant expenditure, provide mask medical kits against Covid-19 to health services, health centers and hospitals.

Since there is a possibility of workers getting leave or immunity from their work, the government should provide special incentives to employ such people. Customs should be completely exempted on food and medicine. As the situation of terror and fear has been created due to the dissemination of wrong information, seriousness should be taken in the dissemination of information. There should be a provision not to spend the budget within three months except for necessity and necessity.

It is hoped and believed that the steps to adopt the above-mentioned suggestions will increase the liquidity of businesses of different sizes in the country as a whole and it will be easier to face the short-term losses and uncomfortable situations caused by the Corona virus.