It is interesting that Edmund Hillary was instrumental in "preparing" the landing strip in the mountain pasture of Mingbo (4,573m) in the shadows of AmaDablam around that time and was approached by Capt. Schrieber, a Pilatus pilot, to know if it was possible to build a suitable strip for unloading supplies in the Khumbu region. 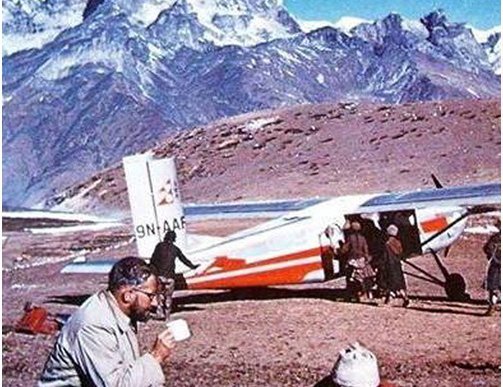 The credit for introducing Short Take-off and Landing (STOL) aircraft in Nepal goes to the International Committee of Red Cross (ICRC). And Swiss-made single-engine Pilatus (PC6) STOLs was involved since the early sixties, particularly for distributing relief materials. Incidentally, Toni Hagen, the famous Swiss geologist, acted as a facilitator between the ICRC and the Nepal Government in talks about how the relief work was to be carried out, given the Chinese sensitivity.

It is interesting that Edmund Hillary was instrumental in "preparing" the landing strip in the mountain pasture of Mingbo (4,573m) in the shadows of AmaDablam around that time and was approached by Capt. Schrieber, a Pilatus pilot, to know if it was possible to build a suitable strip for unloading supplies in the Khumbu region. Ed. had led an expedition to the Khumbu region in the autumn of 1959 to put up a research hut at about 5,950m in the Mingbo glacier. Subsequently, a spot for a possible landing strip was identified at a lower altitude. The first-ever prototype Pilatus (HB-FAN) was already flying in Nepal with the Swiss Dhaulagiri expedition and had proved its worth by setting a high-altitude landing record for a fixed-wing aircraft. Having realized the potential of the Mingbo site Sir Ed struck a barter-like deal, such that his team would prepare the landing strip and the Swiss would ferry several loads of aluminum sheets for his school in Khumjung.

It was not an auspicious beginning as the STOL, on its first Mingbo mission, had its tail wheel damaged on landing, resulting in a few days of grounding. The strip was later extended by 95m, to 460m. Interestingly, local Sherpa wisdom in digging craters to bury two huge boulders, which obstructed the take-off path, proved more pragmatic than the conventional method of hammering and chipping the stubborn outcrops that had wasted many days of futile labour.

Mingbo strip was in operation for several months before the authorities got wind of the unauthorized commissioning and wanted one of their officials to make an appraisal visit. He was flown to Mingbo on April 5, 1960, and had first-hand experience of a dangerous landing under very strong side winds. The pilot had no option but to drop the aircraft vertically from about 10m onto the rough strip with a mighty thud that had everyone on board badly shaken. Naturally, the officer was the most shaken having severe bouts of vomiting having survived a very rough landing at some altitude. And as a knee-jerk reaction, he issued an immediate "fatwa" declaring Mingbo strip closed for good. And by so doing, he also grounded the aircraft he was supposed to fly out. He was politely made to realize that seventeen days of hard trekking was the only way to get back to civilization. Making the quickest U-turn, like an aircraft in a hurry, he decreed that Mingbo be open just for the last outbound flight!

Of course, there must be valid reasons for the use of fixed-wing single-engine aircraft in this country where even a small patch of flat land can be used as a landing strip effectively. RA had owned a couple of more powerful Pilatus turboprops, providing services to areas frequented by tourists. UNDP also owned one, flown by non-other than Hardy Feurer, the famous Swiss pilot who loved and flew in Nepal for many years. Hotel Everest View in Thyangboche solely relied on PC6s to ferry its clients. Hardy also believed that a Pilatus-like aircraft, the landing space for which is between that of a helicopter and a Twin-Otter, was about right for Nepal highlighting its tremendous versatility,

Imagine the potential role of single-engine aircraft (SEA) in facilitating "spot tourism" in the remotest corners of Nepal. And the positive aspects of forward and backward economic linkages such as penetration offer. The airline entrepreneurs have the idea, know about the economic risks and see a window of opportunity. All that the tourism fraternity wants is stable and pragmatic policies, not impractical bureaucratic impositions. Have we banned buses from plying in the hills even when invariably overloaded and in bad shape? And despite that people knowingly climb abroad because it saves time. The truth is, unlike Yatayat Byabasta Bhivag, CAAN has a relatively better record.

Sadly, the Mingbo-like fatwa has killed the single-engine aircraft business altogether, as I hear there are no single-engine aircraft in Nepal currently. It started with unrealistic restrictions like letting them carry just cargo, not passengers, followed quickly by a need to put two pilots imposing more financial liability on airline operators. There is an urgent need to undo the restriction. There will surely be a hue and cry against this. One cannot be compelled to fly in single-engine aircraft unless one is willing. If the public at large is willing and the entrepreneurs ready, the concerned agencies would be better off concentrating on monitoring. And if that were ever to happen, entrepreneurs could be a party in developing newer strips in promising locations in cooperation with local bodies. It should create new opportunities in the local areas in question and also in the country at large. What a tragedy that the overall general policy here is to make it harder for private operators by imposing impractical conditions. Sadly, our politicians still fight, tooth and nail, to build STOL airports in their constituencies, even if grossly impractical for airline operators to fly. 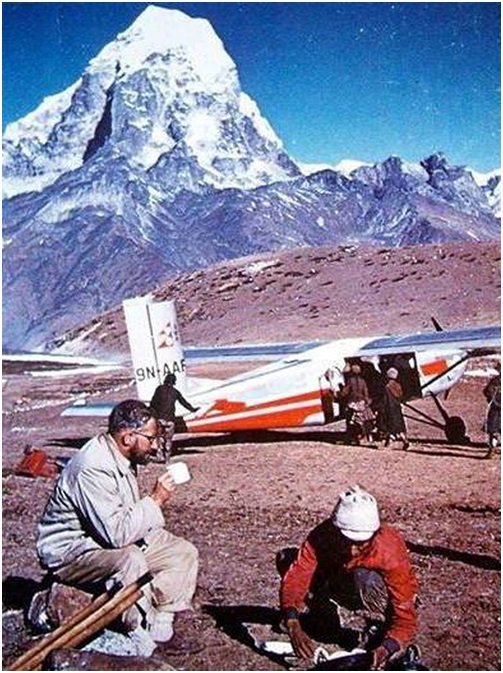 Toni Hagen and a PC6 at Mingbo under towering AmaDablam