Just a week after the visit of President Dr.Ram Baran Yadav, Nepal Army chief General Gaurav Sumsher is in India for a ten-day long visit 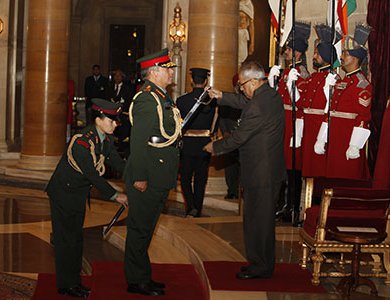 At a time when the row between president Dr. Ram Baran Yadav and prime minister Dr. Baburam Bhattarai is intensifying over president Dr. Yadav’s one to one meeting with Indian politicians and India's senior officials, Nepal Army Chief General Gaurav Sumsher Rana has received the title of honorary general of Indian Army from Indian president Pranab Mukharjee in India.

Although it is an internationally followed diplomatic practice to conduct one-to-one visit between the heads of state, Prime Minister Bhattarai and his advisors openly criticized President Dr. Yadav's one to one meeting with Indian leaders, including Indian president Mukharjee.

"A ceremonial president does not need to hold one-to- one meeting with any officials. President Yadav violated the norms," said deputy prime minister and foreign minister Narayan Kazi Shrestha. Despite differences with Prime Minister Bhattarai, Shrestha sided with prime minister in the present row.

Anger behind Prime Minister Bhattarai and his deputy Shrestha is understandable as president Yadav is said to have projected Prime Minister Bhattarai as a person behind the present political stalemate during his meeting with Indian leaders and officials."Our sources in New Delhi told us that president Yadav expressed his dislike of Bhattarai to Indian leaders and officials and lobbied for opposition leader Sushil Koirala," Devendra Poudel told New Spotlight.

One of Kathmandu's renowned businessmen having very good contact with Indian establishment also supported Poudel's complaint as being close to the fact. "What I can say is Indian leaders were very upset from President Dr. Yadav's presentation as a Congress sympathizer but not President of Republic of Nepal."

"President Dr. Yadav has maintained his diplomatic limits in his India visit. When he met Indian leaders and officials, his one point agenda was holding free and fair elections and brining back stability in Nepal," said a member of the entourage of President Dr. Yadav to New Spotlight on condition of anonymity. "The President rejected any possibility to go beyond the constitutional limit and repeatedly told Indian officials that there is the need of a consensus government to hold the elections at the earliest. President Yadav's argument may be dislike of India."

The difference between the President and present coalition government appeared even in New Delhi. Opposing the views of president Dr. Yadav to hold free and fair elections by a consensus government,  Minister for Irrigation, and member of the entourage, Mahindra Yadav separately met Indian foreign minister Salman Khurshid to oppose President Yadav's views.

The recent statement of Indian Minister for External Affairs Salman Khurshid seems to be a reflection of his frustration.  Inaugurating the 8th South Asian Free Media Conference-2013 in Amritsar, Punjab, Khurshid said he did not want to request the political parties anymore to end the political deadlock rather appeal to the Nepalis to strengthen democracy, and India was ready to support the cause.

“Now Nepali people should act from their side to strengthen democracy in the country and India wishes to support their effort,” Khurshid added addressing Asian Free Media Association (SAFMA) in Lahore. Earlier, New Delhi had voiced its support for a consensus government during President Ram Baran Yadav’s recent visit to India. Meanwhile, political parties in Nepal had been failing to meet all the deadlines given by the president.

Abe's State Funeral To Be Held On Tuesday By Agencies 3 days, 13 hours ago

US-South Korea To Stage Joint Military Ddrills With Nuclear-powered US Carrier By Agencies 4 days, 14 hours ago

South Korea On Alert For Signs Of North's SLBM Launch By Agencies 5 days, 14 hours ago