'Doubts Even About Parties'

Leader of Madheshi Janadhikar Forum-Nepal Upendra Yadav holds the view that CA elections have no meaning in the present context. 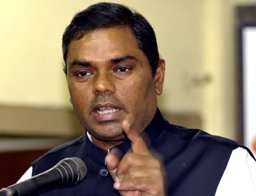 Are you against the elections?

We are not against the elections. What we want is meaningful elections which will deliver the constitution and provide political stability in the country. At a time when the four-party syndicate has even declined to negotiate on the postponement of elections, how can we believe that they will hold free and fair elections?

Do you think the four parties are sincere to holding the elections?

I have even doubts about the intentions of the major four parties. They are also reluctant to contest the elections.

Why are you opposing the elections?

I don't think the coming elections will bring any outcome. If the elections do not bring results, what is their use?

If government uses force to hold the elections, what would be the outcome?

Political parties are still divided. If the elections are held, there will be a bloodbath in the country.

Why are the four parties pursuing elections?

The four-party syndicate wants the election, because they like it. Only through the elections, they can justify their unconstitutional work.

Don't you think the new CA will write the constitution?

I firmly believe that even the next CA cannot write the elections because those who are going to get elected are those who were in the previous CA.

How do you see the role of foreign countries?

I don't think Nepal's friendly countries will support the elections conducted by the four-party syndicate.