Strengths Of A Gandhian Revolution 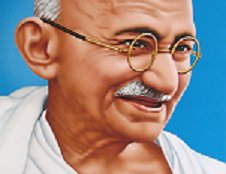 Mohandas Karamchand Gandhi, born on October 2, 1869 in Porbandar, Gujarat of India, and educated in law at University College, London, was a proponent of the non-violent revolution and practiced it to free India from the British rule. He is known the world over as Mahatma Gandhi, and widely recognized as an apostle of peace and non-violence. The word 'revolution' meant to him, a change, a turning of upside down and a great reversal of conditions. It addressed the fundamental reconstruction, especially forcible substitution by subjects of new ruler or policy for the old.

Gandhi was aware of the historic significance of revolution. 'Nations have progressed both by evolution and revolution,' he said and added that, 'history is more a record of wonderful revolutions than the so-called ordered progresses.’

It was his firm conviction that revolution should be brought about by non-violent means. Referring to the French and Russian revolutions, he observed that these failed to realize the democratic ideas because these were 'fought with the weapons of violence.'

Those, who, with an entirely honest motive, ousted the greedy and the corrupt by using brutal force against them, become in their turn, 'a prey to the disease of the conquered.'

The world, Gandhi held, was sick of armed rebellions. He was of the view that a bloody revolution would not succeed in India for the reason that the masses have no active part and can do no good to them. A successful bloody revolution can only mean further misery for the masses.

A violent revolution eventually ends in the gravitation of power into the hands of the few instead of the many. It invariably gets personalized and deviates to becoming a mere clash of egos, in the process sidelining the main agenda, the concern of the masses. History of violent revolutions has clearly shown that it always has done more harm than good. In Gandhi's own words, 'an eye for an eye ends up making the whole world blind.' History also shows that violence tends towards the concentration of power and ultimately leads to dictatorship.

In an active non-violent revolution, even the weakest can participate without becoming weaker. A non-violent struggle necessarily involves constructive and continuous struggle on a mass. It cannot therefore lead to tamas or darkness or inertia. It means a quickening of the national life. The method of non-violent revolution is not a slow process, but is the swiftest method the world has seen. And it is the surest on achieving the goal, according to Gandhi. To crown it all, it is the noblest way, for it prevents the brutalization of human nature and teaches the people to side voluntarily in favor of truth and justice.

The Gandhian theory of revolution is based on historical experiences. A study of the French and the Russian revolution proves to the hilt the futility of violent revolutions in achieving the desired objectives. The latest of all revolutions in our nation reiterated the fact that a collective, voluntary and non-violent mass movement of less than 10 days could achieve what a violent revolution of more than 10 years could not muster.

Commenting on the French revolution, Pandit Jawaharlal Nehru once said, 'they achieve wonders, those people of France, until after several years of terrible strain and conflict and as the revolution exhausted its energy it turned on itself and began to eat up its own children. And came the counter-revolution.  It not only swallowed up the revolution but also sent common people, who had dared and suffered, back to be ruled by the superior classes. Out of the counter revolution emerged Napoleon, a dictator and an emperor.

Reflecting on the Russian revolution, H. G. Wells observes, 'it proved again the soundness of the principle that a revolution can create nothing that has not been fully discussed, planned, thought-out and explained beforehand. Otherwise, a revolution merely destroys a government, a dynasty, an organization as the case may be. A revolution is an excretory operation not creative one.'

Speaking about violent revolutions to overthrow tyrannical regimes, Richard H. Tawaney says, 'Revolutions, as long and bitter experience reveals, are apt to take their colour from the regime they overthrow.'

The Gandhian pattern of non-violent revolution is a positive and creative one. It has fair prospects of realizing its ideas and aims. It devours neither its own children nor itself.  It does not wind up in a new tyranny or dictatorship. It, in fact, paved way for one of the world's largest democracy.  It was a solo initiative; an act of perseverance, patience and participation. Gandhi has become a phenomenon for all to appreciate and take heed from.

China’s Rapid Transformation And Lessons To Learn By Krishna Silwal 12 hours, 4 minutes ago