I was beginning to get the impression that constant political instability had caused Nepalese people to become indifferent to politics and lose faith in the democratic process. This isn’t unique to Nepal. Australians are also becoming apathetic towar 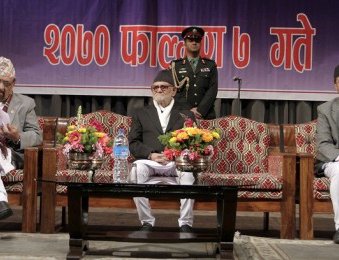 As an Australian visiting Nepal, I was excited to see what would take place during Rastriya Prajatantra Diwas – Democracy Day.  This public holiday, I am told, marks the 64th anniversary of the Nepali’s triumph over the 104-year Rana autocracy.

Some locals told me that there would be a big celebration in a field near Kanti Path.

I started the day with a coffee while reading a local newspaper in Thamel. Scanning the front page, I expected an occasion as monumental as Democracy Day to get a front page mention. I guess this holiday was overshadowed by the recent and ongoing political transition.

As I made my way towards Kanti Path, I noticed that all of the shops were open, it was just like any other day.

I stopped and asked for directions. Hari, a high school teacher, agreed to show me the way. “It’s near my bus stop” he told me.

I asked Hari if he does anything to celebrate democracy day. “I remember celebrating as a child”, he said, “not anymore… now nobody cares because of government instability”.

We arrived at the entrance where the celebration was to take place. Four men were gathered around a makeshift bamboo ladder that was propped against a colourful, arched façade that stood before an empty field.

Hari poked his head through the gate and spoke with one of the men. He looked back at me and shrugged his shoulders, “it’s not happening today”, he told me.

I made my way back through Kanti Path. I asked a few people on the street if there were any Democracy Day celebrations happening, they all pointed me in the direction of the empty field.

Back in Thamel, I asked my Nepali friend if Democracy Day was a big holiday in Nepal.  “I didn’t know it was Democracy Day”, he said.

In July last year, ANZSOG, the Institute for Governance at the Canberra University conducted a survey of 1, 377 Australians to gauge their role in the democratic process.

The survey found that Australians feel they are “observers rather than participants in formal politics”.

According to the survey, Australians are “irritated by politicians talking rather than acting” and are “annoyed with the compromises of politics”.

You can find this tired attitude towards politics in many countries, while in other countries people are still fighting for democratic rights.

The annual Freedom House, ‘Freedom in the World 2014’ report, found that only 45 per cent of the world’s population live in a country that is considered ‘free’, in terms of political rights and civil liberties.

The report found that for the eighth consecutive year there were more declines than gains in democracy worldwide.

ekantipur.com said that Democracy Day is particularly significant, in that the defeat of the Rana dynasty marked Nepal’s “entry into the modern world”.

“Of course people care about democracy” my Nepali friend told me. This must particularly be the case in Nepal considering the enormous sacrifices Nepali’s have made to gain democratic rights.

Democracy Day, the anniversary of Nepal’s “entry into the modern world”, will hopefully not also mark the affliction of political apathy that many modern, democratic countries grapple with that is brought about by frustrations with politicians and the democratic process.  Emma Luimes is an intern from Australia

Border Dispute Between Nepal And India By Dr. Prabin Manandhar 5 days, 22 hours ago