'Shiva's Sacred Herb, the Holy Man and the Layman'

Acting on directions from the USA, the Nepali Government deported many hippies from Freak Street to India, and banned the production and sale of marijuana and hashish in Nepal. The Nepali Government even enforced dress codes on incoming tourists. St 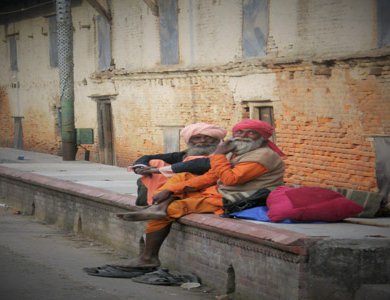 A Sadhu is sitting alone on a pillar. He sits cross legged on a quiet stretch overlooking the water. There are still lines of people wedged together waiting to get into the temples.

The sound of beating drums, singing and the unanimous cheer of the crowd resonates from the main festival area.

The festival lights reflect off the Bagmati River as the smell of incense, burning logs and a subtle hint of marijuana floats through the air.

Two boys, maybe 16 or 17, approach the Sadhu and whisper in his ear, the Sadhu looks over his shoulder.

The Pasipatunath temple is considered to be one of the most sacred sites for Hindus and attracts thousands of pilgrims, holy men and devotees every year during the Maha Shiva Ratri festival.

An estimated one million devotees came to worship at the bustling Pasipatunath temple during Shiva Ratri this year.

Many tourists also attended the festival, allured to the display of religious devotion not seen in the west, and the sight of marijuana-smoking Sadhus on the night consecrated to Shiva.

Although marijuana is illegal in Nepal, Sadhus are permitted to smoke it in honour of Lord Shiva during the festival.

The Nepali Government once supplied the Sadhus and other holy men with cannabis. This practise was stopped after complaints that the Sadhus were selling marijuana to the locals at the festival.

Gone are the days when the Nepali authorities would give marijuana and animal hides to exiting Sadhus and holy men, but the practise of giving them some departing rupees still remains.

This day of Government leniency towards the use of marijuana in the name of spiritual elevation stirs memories of Nepal’s Freak Street era.

Freak Street, in the Basantapur area, was a shangri-la for hippies the world over in the early 1960s and 70s.

Marijuana and hashish were legal and sold out of government-licenced shops. Nepal became a popular destination for those in the hippie subculture.

Their presence arguably opened up Nepal as a tourist destination to the world, and the Kathmandu Airport used to have a bus service that ran directly to Freak Street.

However, in the early 70s, the Nepali Government did an about-face.

Acting on directions from the USA, the Nepali Government deported many hippies from Freak Street to India, and banned the production and sale of marijuana and hashish in Nepal.

The Nepali Government even enforced dress codes on incoming tourists. Stifled by the Government restrictions, by the late 1970s the hippies had all but left their utopia.

The US continues to monitor Nepal in relation to its drug law enforcement.

Last year the US’sInternational Narcotics Control Strategy Report suggested that the Nepali Government’s approach to drug law enforcement is lagging behind, and said that it needs to ‘enact and implement updated drug legislation’.

However, The Narcotics Drugs Control Act 2033, (Nepal’s main law in relation to drug enforcement) had improved its capacity in recent years, and has made ‘more quality arrests and seizures’, the report said.  According to the report, Nepali customs and border control ‘remains weak’

Cannabis has been used traditionally in Nepal for centuries and it can be found growing wild in the central, mid-west and far-western parts of Nepal. Other reports claim that the cultivation of cannabis is on the rise in some areas and that the majority of it is destined for India.

The USA seems to be focusing its attention on international trafficking and large scale operations. Domestically, the US appears to be easing its attitude towards marijuana laws.

From January 1 this year, Colorado residents over the age of 21 are allowed to buy marijuana for recreational use from licenced outlets.

Washington also passed laws allowing the sale of marijuana, which should come into effect by the end of this year.

Non-Colorado residents are allowed to buy smaller quantities of marijuana.

According to reports, the US Justice Department said it won’t challenge Colorado or any other states regarding legalising recreational marijuana, instead, it would focus on serious trafficking.

Colorado has also seen a rise in tourism as people come from all over to buy legal marijuana, and some companies are selling ‘marijuana tour packages’.

It has been reported that the tourist desk in the Denver International Airport has a list instructing tourists where they can find legal marijuana. 5000 plus Members of the Nepali police and Armed Police were deployed during Shiva Ratri to monitor the vast crowds this year.

“Shiva Ratri is the greatest festival of Nepal”, “but (Nepali citizens) can’t smoke over there, he says.

These “virtuous persons, wandering here and there in search of god are allowed to smoke during Shiva Ratri, in the temple area”, the officer explains. “Sadhus are free from the restrictions of the law”, he says.

The officer says that if a Sadhu gets caught selling marijuana, then “of course they would be in trouble”. Nevertheless, the exchange of Shiva’s sacred plant between the holy men and the laymen was explicit during this year’s Shiva Ratri festival.

Despite this staunch stance, the sea of bleary, red-eyed festival-goers showed that attempts to control marijuana use is a monumental task, considering that the Nepali authorities were outnumbered 200 000 to one at Pasipatunath this year.

“It’s difficult to control everything”, the officer says.

International Community Call All Actors In Nepal To Respect Right Of The People By NEW SPOTLIGHT ONLINE 15 hours, 59 minutes ago

Secretary General Of SAARC Calls On President Of Nepal By NEW SPOTLIGHT ONLINE 20 hours, 10 minutes ago