With a century long history of using water to generate energy and meet drinking water and irrigation needs, Nepal has the experience of what works and what does not in sustaining the use of water for multiple purposes. 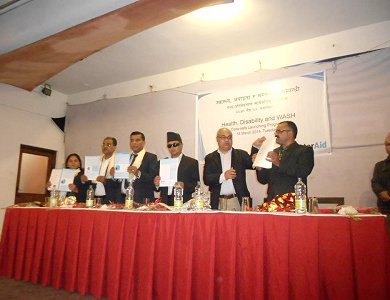 The Pharping Powerhouse, Nepal's first hydropower plant installed a hundred years ago, is still a model for sustainable use of water for all purposes from energy generation to irrigation and drinking water. However, the present situation of water use is frustrating. As Nepal is celebrating the World Water Day 2014, with the slogan of 'Water and Energy', what happened to our past efforts in harnessing water is a question gaining increasing salience. Nepal’s hydropower generation is below 700 MW with 13 hours load shedding a day during winter, a large chunks of fertile land without proper irrigation facility and over 20 percent of population having no access to drinking water and more than 50 percent making do without proper sanitation. Despite the availability of 230 BCM of water annually for all the purposes, why is Nepal unable to govern and manage its water system?

The Pharping Powerhouse symbolizes Nepal’s proud history of successful utilization of water governance and management for all the purposes. This is the reason it is always a part of demonstrative units for experts and water activists.

As in the past, a group of experts and water activists chose to visit the powerhouse during a program on the World Water Day 2014. Situated 15 kilometers south of capital Kathmandu, the Pharping Powerhouse, built in 1911, is still the best example of sustainable use of water.

Although bestowed with tremendous water resources, Nepal’s overall scenario of water utilization is bleak, particularly in terms of people's access to water and sanitation. Released on March18, 2014, Water Aid Nepal’s dataset on Health and Water Sanitation and Hygiene (WASH) showed that Nepal has a long way to go to supply safe drinking water to all its citizens.

Along with water, Nepal’s status on sanitation is also dim. According to WaterAid data, 36 percent of households still use bush or open field for defecation. In 2001, only 18 percent of mothers disposed of their children’s stools safely as compared with 26 percent in 2006 and 41 percent in 2011. Only 62 percent of households have sanitation coverage in Nepal. Water, sanitation and hygiene-related ailments and diseases such as intestinal, worm, diarrhea and dysentery, still fall under the most prevalent diseases.

Despite several efforts, only 85 percent of the population has access to improved sources of drinking water.  However, most of the completed urban water systems are not delivering water satisfactorily. In the rural areas, the government policy has been to hand over management of the Department of Water, Supply and Sewerage built systems to the communities. Many completed rural water schemes are not functioning properly. Only those which are under the community have been functioning properly. Thanks to the shortage of energy, water supply has worsened further.

Out of 2.64 million hectares of cultivable land, 66 percent or 1.76 million hectares is irrigable. According to Water and Energy Commission Secretariat, around 60 percent of the irrigable land has some kind of irrigation facility and less than one third has round-the-year-irrigation. Expansion of irrigation is essential for meeting the food security requirements of the country.

According to a study, over 800 million cubic meters of ground water resources are being used for irrigation purposes and 300 MCM for domestic uses. Despite the abundance of water availability, the distribution of water is unequal and varies from region to region and place to place. The Bagmati Basin is the poorest area, where the water shortage exist at an acute level. As Kathmandu valley lies in the Bagmati Basin, a major water supply crisis has the capital in its grip all the time. As Nepal’s urban population continues to increase, there is an increase in the demand of water for various purposes.

Although the enormous water surplus at the national level, time and space variations in water resource availability and demand call for more intense water resource management and there are some cases where river basin organizations may be required.

As Nepal’s water utilization scenario is bleak,  Nepal celebrated the World Water Day in the form of Nepal National Water Week. With the theme of 'Water and Energy’, Nepal was celebrating  the week with thirteen hours of load shedding, despite of enjoying a potential of as much as 40,000 MW of hydropower. Thus, hydropower is regarded as an engine of national economic growth to Nepal.

Nepal is known as a country with abundance in water resources and Nepalese do not tire to harp on being among the water richest in the world. However, the situation is just the opposite. There is neither enough water for drinking nor has Nepal exploited enough water to harness power. Nepal is yet to use sufficient water for irrigation.

“Nepal has enough water to make the changes. However, Nepal’s failure is the governance and proper management of water resources,” said former minister and water activist Ganesh Shaha, who has been working in this area for long. "As temperature is rising and snow is melting fast as well as the changing rain pattern, Nepal’s water scenario will be different in the coming decades.”

One cannot ignore the management and governance issue of water related agencies. As water management is the job of public utilities, governance is sometimes questionable.  Kathmandu Upatyka Khane Pani Ltd, that is, KUKL, and Nepal Electricity are two examples.  As Nepal Electricity Authority regulates the power supply, by cutting power for almost 13 hours during the dry season, KUKL  rations water.

These two institutions indicate how the failure of the government utilities has allowed the situation to go out of control. “We need to use water as an economic resource for the country’s overall development. Nepal cannot be rich without proper utilization of water resources. However, it is unfortunate that Nepal has been passing through a severe power shortage,” said Radha Gyawali, Minister of Energy. “We cannot bring changes in the society without supplying adequate energy through the water.”

“Ministry of Energy is doing its best to bring enough power in the national grid and reduce the current state of load shedding,” said .... Pandit, secretary of Energy, addressing the World Water Week 2014. “ "With its limited resources, Nepal Electricity Authority has been doing its best to generate energy.”

Water is used for consumptive and non-consumptive purposes. Consumptive uses are for domestic, irrigation and industrial purposes. Non-consumptive uses are for hydropower. Nepal requires over 1,000 mm/yr water for domestic, 20,000 for mm/ yr for irrigation and about 100 MM year for industries, mainly agro-industry. Although Nepal has 42,000 MW economically viable hydropower potential, it has generated just over 700 MW so far. Nepal has more than 6,000 rivers, in a dense network with steep topographic conditions. Nepal has four main river systems the Mahakali, Karnali, Gandaki and Kosi. The total average annual runoff from all these river systems is estimated at about 230 billion cubic meters.

Until now, Nepal has utilized mainly medium and small rivers for different uses such as drinking water, irrigation and hydropower. The large and perennial Himalayan rivers, except for a new run-off-the-river, schemes have been virtually left untapped.

As there is extreme seasonal variation in water availability in the Nepalese rivers, all the future programs will have to focus on storage of water during the rainy season and its utilization during dry periods.

The annual rainfall varies from 500 mm/yr in some western areas to more than 4,000 mm/yr on the southern slopes of the Himalayan ranges with 70 to 80 percent occurring during the monsoon and generating runoff to more than 6,000 water courses.

With bad governance and management, Nepal’s water resources sector is likely to face serious implications of climate change. As the temperature rises, it will have effects in Nepal’s rain patterns. Emerging water shortages have had wide-reaching economic and environmental effects: they threaten agriculture-based livelihoods and undermine natural resource bases. The shortages will have impacts upon the hydropower and water and sanitation. The drought will have major impacts on food security.

It is the whole nexus of climate change, water and energy, and the conservation and sustainability aspects that require proper attention. There is the need to discuss and understand the relations and interactions among the various parameters.

The theme of World Water Day 2014, that was, Water and Energy, is central to achieving a sustainable future. It also cuts to the heart of inequities, particularly for the poorest of the poor, who suffer greatly from lack of access to water, sanitation and modern forms of energy. World Water Day aims to raise awareness across a broad range of business domains and government sectors to solve water and energy challenges in a cohesive way.