The Legislature-parliament passed the TRC and Forced Disappearances Bill with majority. 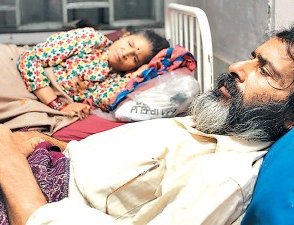 One of the main functions of any state is to defend its borders. The second function is to maintain the law and order and give justice and the third is to protect the life and liberty and property of the people. The Nepalese state is also supposed to do the same.

However, in practice, the state is functioning differently. The old parents of Krishna Prasad Adhikari of Fujel-7 have been staging a fast to death for almost six months in Bir Hospital demanding investigation and justice. Instead of listening to them, the elected CA passed a law that denied justice to the demand of the Adhikari couple.

”It is a shame on so-called CA which promises to give a democratic constitution guaranteeing life, liberty, justice and peace. At a time when parents have to go fasting until death for months seeking justice, what kind of justice does the new TRC want to give?” said a source from legal background.

Even the leaders of political parties have termed the old duo’s move as anti-peace now.  The Nepali state is unable to function properly. It fails to secure border, maintain law and order and now even the life, liberty and property is under threat. “What kind of state is this where parents are in the fast to death demanding proper investigation in a criminal case,” said a lawyer on condition of anonymity.

When hard evidences are rejected, what is the sense to investigate on the basis of fabricated evidences.  Can this country claim that it fulfills its obligation to deliver justice? How strange in the 21st century it is that someone is holding fast to death demanding to bring the culprit before the court.

A person who was given life sentence by court is a sitting member and the former prime ministers challenge the government asking to arrest him. Is this justice in a civilized society? What is the sense to have written words in the constitution if citizens are denied justice?

The existence of the state is irrelevant in case it fails to provide security to its citizens. If the state cannot provide justice, by passing the law on TRC, it is denying the right to life of its citizen and has shown apathy towards the victims of atrocities.

Though the bill has several problematic provisions, both activists and victims have seriously objected to the provisions related to the mediation between the victims and the perpetrators (section 22), amnesty (section 26) and foreclosing of investigation, and prosecution in cases where mediation is sought (section 25.2.A).

Some have further argued that bill requires victims’ consent and decision for mediation. However, the combined reading of sections 22, 25 and 26 of the proposed bill gives a different picture altogether.

Section 22 gives the commission powers to mediate between the victims and the perpetrators. But the Commission can do the job at the request of either party – whether perpetrator or victim. Further problematic provision is section 25. 2 (a), which bars the commission from making any recommendation for the investigation and prosecution in those cases where mediation is done! This provision will, no doubt, force the victims for mediation with the perpetrators.

"This bill encourages impunity and will not help in moving the nation forward," said Rameswar Nepali, Amnesty International-Nepal country representative.

After a severe criticism, parties changed certain languages before passing it. One of the provisions has also stated that the TRC shall investigate into all war-time cases even if a court or any other body is investigating them, irrespective of the existing laws in the regard.

Similarly, a new provision has added which states that the TRC shall recommend to the government to compensate those whose properties were seized during insurgency.

Others hold the view that critiques are misguided. "The bill isn't perfect, but it still favors the victims and we will object to anything that violates human rights laws," said Ram Narayan Bidari, UCPN-Maoist law maker.

Although the Legislature-Parliament passed the Bill on Truth and Reconciliation Commission and Commission of Inquiry on Disappearances by a majority vote with some amendments to the original Bill, it is yet to satisfy the victims and right activist.

EP DELEGATION Visit For Cause By A Correspondent 9 hours, 32 minutes ago

Nepal, Canada Discuss A Range Of Matter Of Bilateral Interest By NEW SPOTLIGHT ONLINE 11 hours ago