As Nepal is facing unprecedented situation following major flooding and landslides, the resilience summit held by USAID will be of much significance 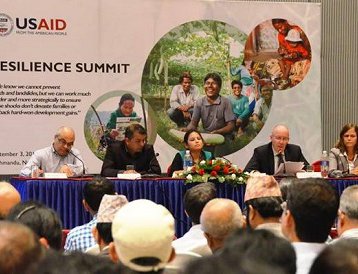 Just a month after a major landslide, which caused high casualty in the central region near capital Kathmandu, Nepal faced another massive flooding in mid-western region with huge losses of life and property.

The deadly landslide and heavy floods of Banke, Bardiya and Surkhet are just a starter. Disaster and natural calamities are natural phenomena. Given the present trend and warming climate, they are likely to become more intense in the coming days.

As people have lived in the past and they have to live in the present. As there are challenges of natural disasters, there are solutions as well. As natural  disasters are going to be regular phenomena, building a resilience is a way out against all kinds of disaster.

The casualty of humans and losses of property can be minimized by making effective early warning system, backed by strong data on flood, rain pattern and possible ways for evacuation. Similarly, damage to crops can be recovered though the use of new resilient crops. Here comes the importance of the discussion that took place in a recent Resilience Summit organized by USAID.

According to USAID, when confronted with events like floods, earthquakes, climate change or changing disease patterns, people should be able to take effective action to avoid major losses and preserve their abilities to rebound and get back on track.

USAID Nepal Mission Director Dr. Beth Dunford said disasters are creating more problems all over the world including Nepal and there will be more drastic and intense disasters due to climate change. She said Nepal needs to develop resilience to cope with future disasters.

Nepal has lost 5.97 billion rupees in the recent disasters. The loss in Sindhuplchowk alone is over 1.46 billion rupees. With 50 deaths and 124 missing, the number of seriously injured are 54.257 affected families with 1158 displaced. Out of 258 deaths and 254 missing till September 3, Surkhet district incurred second highest loss with 34 dead and 91 missing followed by Bardiya with 31 deaths and 16 missing and Dang 14 deaths and 3 missing

However, Bardiya has the largest number of displaced persons of 80,867 followed by Banke with 41,045 people displaced. Bardiya suffered the highest loss in monetary terms with 3.77 billion rupees of destruction of property and infrastructure. Similarly, the total damage of Surkhet district is equivalent to 292.88 million rupees.

Out of 75 districts, the natural disaster affected 42 districts of Nepal with casualty of 258 deaths and 254 missing and 155,118 affected persons.

Floods and landslides have damaged standing paddy and vegetables on 35,804.1 hectares in 17districts, including the rice-bowl districts of the country such as Bardiya, Banke, Dang, Kanchanpur, Siraha and Rautahat.

“The Government of Nepal sees resilience as a vital framework to help alleviate poverty and promote more sustainable development, lessening the impacts of disasters. That will take creativity, innovation, and cross-sectoral partnerships, and we are pleased that USAID is highlighting this most important priority,” said chief guest, vice chair of National Planning Commission, Dr. Govinda Pokharel.

"Resilience is essential if we are to win the fight against poverty. We know we cannot prevent floods and landslides, but we can work much harder and more strategically to ensure these shocks don’t devastate families or set back hard-won development gains,” said U.S Ambassador Peter Bodde.

According to a press release issued by Public Affairs Section of Embassy of the United States, the U.S. Agency for International Development (USAID), three new programs with up to $70 million in funds will help communities more quickly recover from natural disasters and other stressors.

UN Resident Coordinator Jamie McGoldrick stressed the need to improve the level of preparedness and mitigation activities in the coming days. Donor communities also need to reorient the programs.

Prevention or mitigation is key to cope with the disasters.“Nepal's coming challenges will be to prevent the damage and loss from natural disasters,” said Gagan Thapa member of Constituent Assembly.

Along with other losses, the loss of crop will affect the nutrition. The Ministry of Agricultural Development (MoAD) has projected a loss of Rs 2 billion in the production of rice alone. Apart from the damage to land, rice production might fall by more than 10 percent because of landslides, flooding and drought.

“The current disasters will affect the level of nutrition among children and women,” said Puja Panday Deputy Chief of Party of USAID funded Suahara project.

The number of weather-related disasters has tripled in the last 30 years. The year 2013 was the year with the most disasters. This year’s unprecedented flooding and landslides affected thousands of Nepalese – already among the most vulnerable – across the country and they are examples of increasing weather-and climate-change induced disasters.

Attended by the government officials and development experts to look for new models to solve complex and interrelated challenges such as extreme poverty, food security, and climate shocks,  this is the first major program held with a new approach.

The three USAID Resilience Projects include up to $70 million Community Resilience Program, integrating disaster risk reduction and climate change adaptation into USAID’s food and nutrition security efforts in Nepal. As a quarter of Nepal’s population lives below the international poverty line of $1.25 per day, this program will benefit an estimated 5 million of the most vulnerable in Nepal’s hill regions.

There is also a $500,000 Innovative Early Warning Flooding System. USAID’s Office of Foreign Disaster Assistance will fund an early warning system to help protect communities in the Eastern region from flooding. The project will install gauges along flood-prone rivers and share real-time data with district authorities using SMS and email. This will help save lives in the event of flood.

A $100,000 Science and Technology Competition for Resilience – a call for bold and innovative solutions to “building sustainable food security” in Nepal. The Competition was to open on September 4, and will be open to individuals, non-profits, academic institutions, and the private sector, with a focus on districts primarily in the Mid- and Far-West regions of the country.

Working under the leadership of the Government of Nepal, the U.S. Government aims to save and improve more lives, build inclusive economic growth, and decrease the need for humanitarian assistance.

Climate change-driven events like melting glaciers pose a grave risk to Nepal’s economy and could cause losses equal to almost 10 percent of the country’s annual gross domestic product (GDP) by 2100, according to a report by Asian Development Bank (ADB).

Without changes to current global behavior, Nepal would see economic losses equivalent to up to 2.2 percent of annual GDP by 2050, widening to 9.9 percent by the end of the century.

“But if mitigation and adaptation steps are taken, the damage could be limited to around 2.4% of GDP by 2100,” states the report “Assessing the Costs of Climate Change and Adaptation in South Asia”.