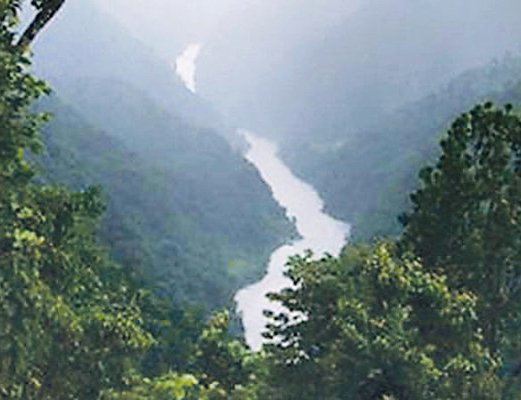 The unique 4180 MW Upper Karnali Project is one of the great wonders of the world because instead of a man-made dam necessitating huge investment for construction of such mammoth project, a mountain serves as the 410 meters high giant main dam which is going to be the world’s  highest dam far exceeding the height of the 335 meters high Rogun dam. Until now the world’s highest dam is the Rogun dam which is still under construction. Unfortunately the 4180 MW Upper Karnali Project is under threat of being devastated.

The vast feasibility study of  the Karnali projects carried out under the World Bank loan assistance to our country by a large team of four renown consulting firms from the USA and Canada along with advisors from the internationally famous US energy giant Bechtel International have identified a  uniquely ideal site for the Upper Karnali storage dam project where a narrow mountain chain will be  performing exactly the role of a 410 meters high lateral dam.  Only a relatively small 260 meters high dam needed to plug the river would have to be constructed  to complete  the 410 high mammoth composite dam.

The per unit energy generation cost of the Upper Karnali storage project will be exceptionally cheap  for two main reasons:  (a)  The operating water head for the generation of power would be very high. There will be significant reduction in generation cost of electricity at higher head if the dam cost is discounted. (b)   Though raising the dam height  helps to reduce significantly the generation cost of electricity if the dam cost is discounted but such dam height raising beyond certain range leads to exponential increase in dam cost. This is one of the main reasons why excessively high dams are not found to be highly attractive. In our case the project will be having the giant 410 meters high dam for free because a mountain serves as the dam.

A Unique Type of Topography

Karnali river flows  from the proposed dam site in the south-east direction for about 25 kilometers, after that the river makes a complete  reversal in its direction. The river comes back to a point just two kilometers  away from its earlier position.  There is a drop of 150 meters  in Karnali river bed  elevations  between these two positions merely two kilometers away  from one another.  As explained before the narrow mountain range between the upper and lower courses of the river  will  be serving  as  the  410 meters high main dam whereas a  relatively moderate 260 meters high embankment dam at proposed dam site needed to plug the river will be its subsidiary component.

Water drawn from the storage reservoir into the 4180 MW underground power station constructed inside the mountain serving as the main dam will be generating annually  about 9000 GWH firm energy.  The total length of the waterway from the intake of the headrace to the end of the tailrace tunnel including the cross-sectional width of the underground power station will be only two kilometers. The similar length of the 10800 MW Karnali Chisapani Project is also two kilometers.

Unfortunately our government is going to kill the vast hydropower potential of the Upper Karnali Project.  An Indian company GMR is going to be granted  permission to implement  the 900 MW Upper Karnali Project  to  generate annually relatively expensive 1000 GWH firm energy precluding for ever the opportunity  to implement  the mammoth 4180 MW Upper Karnali Project annually generating exceptionally cheap 9000 GWH firm energy despite the caution explicitly expressed in the World Bank assisted feasibility study report of Karnali  projects that the above two projects  would be mutually exclusive of one another.

The vast hydro power potential of the Upper Karnali Water resources is at risk  of being plundered. No need to mention that water resources project like the 4180 MW Upper Karnali Project  is the most generous gift of mother nature to mankind.  Civilized society any where in the world must be concerned if the existence of such  most valuable natural resource is threatened.  The  intelligentsia of  our country in particular must be concerned and  should help to save this most precious gift of  nature from being  devastated.

Indian Premier Mr. Narendra Modi has emerged as the world’s  greatest  statesman dedicated to human wellbeing  and development. He is taking special interest in Nepal’s development. It is hoped that the Upper Karnali project issue concerning the fate of this  WORLD’S  HIGHEST  DAM  PROJECT  would come to his notice during his forthcoming visit to Nepal to participate in the SAARC  summit meeting since the market of our surplus energy is India.

In recent years serious blunders are being made in the field of water resources development. Upper Karnali is not the sole case. There are several other instances. One of the unpleasant cases involving Indo-Nepal cooperation is the Kosi river development.

At present detailed study is being conducted to  prepare feasibility report of the Kosi project  for power generation, irrigation, providing navigation canal linking Nepal with seaport and flood control to save the life of millions in India and Nepal based on prefeasibility report of Kosi project prepared by India. According to that prefeasibility report the full supply level of the reservoir is 334.8  meters. Recently our government has granted permission to a foreign company to implement the Lower Arun Project having its power station at a level 305.4 meters    which will be totally submerged. Similarly the power station of the Dudh-Kosi project would also be deep inside the Kosi reservoir.