PRABIN LAL SHRESTHA, Managing Director of Upper Solu-Hydro Electric Company and ICTC Group, is a charismatic young entrepreneur of Nepal. As the project has recently signed its financial closure agreement, Shrestha spoke to New SPOTLIGHT about the pr 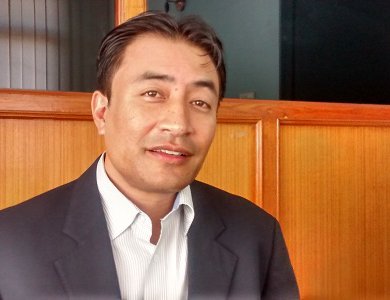 How do you see signing of the financial closure?

After signing the financial closure agreement of Upper Solu, there is an increased the level of confidence among other private investors waiting to invest in hydro power sector. We signed the agreement taking a major risk of investing in the project as ICTC is a sole investor of the group. From the bidding process, we mobilized all networks within the group and took the risk of such a big project. Our decision has definitely had impacts on other groups also.

Given the present state of NEA’s transmission construction activities, how confident is your group about timely completion of Solu Corridor Transmission line?

The recent activities make us worry a little. We bid in 2009 and secured license in 2010. We were ready to go for construction in 2011. As there was a lack coordination between Ministry of Energy and Nepal Electricity Authority (NEA), the signing of Power Purchasing Agreement was delayed. It was completed only in November 2013 and the government issued generation license in March 2014.  As NEA got a line of credit for the construction of transmission line, NEA should have announced tender to select the company. However, the process is yet to start. During the process of construction, one cannot rule out the possibility of unseen events to disturb the project. The NEA should keep enough time to avert the delay. We don’t know whether there is this kind of understanding in NEA.

In case of the delay in the completion, don’t you think it will send a wrong signal?

Yes. There is risk involved in it. As the private sector is showing reluctance following complications in hydro-power projects like Misti and Mai, there will be a huge set-back in overall projects in case of any obstruction in our project. No developer will take the risk. Although there are conditions for compensation in case of NEA failures to construct transmission lines, nobody will construct the project looking at the compensation.  This project will be test case for the government and NEA.

When will your project complete?

What is the state of the project site?