After a disaster, companies would get under great pressure while managing activities related to emergency response, disaster recovery and finally continuing the business as usual 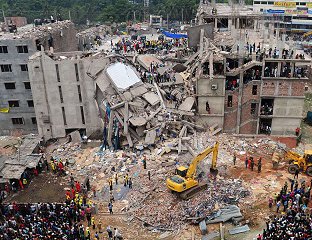 Last April 2014, the sandwich collapse of Rana Plaza garment factory complex in the outskirts of Dhaka, Bangladesh marked its one year anniversary with commemoration and protest for compensation and safer working condition for the workers. The deadliest industrial accident in the history of Bangladesh claimed nearly 1,138 lives and yet more than 2,000 were left seriously injured or disabled. International Labor Organization (ILO) estimated that some $40 million needed to compensate the families and disabled garment workers. Similar industrial accidents had happened in Bangladesh in the past but probably were not loud enough to register a wakeup call for the government or the concerned authorities. Most importantly, the Rana Plaza disaster could have been predicted, prevented or well-responded had they adequate safety and disaster risk reduction measures in place.

Better late than never, the Rana Plaza garment factory debacle brought about massive movements for similar industries to sign up for the newly implemented  Bangladesh fire and building safety accord. Although some progress have been made since, there still remains several unresolved issues such as lack of full implementation of newly-legislated labor laws, absence of a comprehensive building safety inspection process, and inadequate arrangements to compensate the victims of industrial accidents. There are lots of fire and building safety issues which still need to be addressed to comply with the accord.

Immediately after the disaster some key garment buyers and international retailers withdrew from Bangladesh while others responded with an objective of improving the factory condition including building infrastructure, fire safety and working conditions of the workers. At the time, there were about 30 major foreign retail brands which were supplied by more than 5,000 garment factories in Bangladesh. It was sad to see that, in the wake of the disaster, only half of the retail brands came forward to compensate the family and the injured workers as part of their so-called Corporate Social Responsibility (CSR) activity. The other half probably wanted cheap clothes at the expense of safe working condition and wellbeing of the workers in Bangladesh. This could be a classic example of 21st century slavery where labors in developing countries are enslaved by affluent business societies around the globe.

Businesses need to understand that the social responsibility of private sector goes beyond the day-to-day operation of producing efficient products and services for customers. The CSR of a company is not concerned just with its clients, suppliers, employees and shareholders but also with communities and other downstream stakeholders who take an interest in the behavior of the company. Sometimes private businesses are so busy making money they forget to see the complete picture and misinterpret CSR as mere charity works in bits and pieces. Of course there are short term benefits associated to these philanthropic activities to both business houses as well as communities but the targeted social and business impact gets diluted as often budget is limited and not sustainable for the desired cause.

Businesses definitely need to rise above the charity and the compliance requirements set by the government or international bodies and work on building a solid & sustainable platform where private sectors, communities and stakeholders can come together for shared values and wellbeing of people & environment as a whole. CSR can bring fundamental value to the private companies only if they learn to incorporate it into their growth strategy and sustainable business model.

As per Bangladesh Garment Manufacturers and Exporters Association (BGMEA), foreign buyers cancelled orders worth USD 110 million from 37 factories in 2014. The number of new ready-made garment factories also declined from 113 in fiscal year 2012-2013 to 65 in fiscal year 2013-2014. On one hand Bangladesh has this immense need to address its existing safety and disaster preparedness issues such as fire and building safety accord while on the other it has more immediate challenge to quickly restore confidence of the foreign retailers so that the garment business continues with minimal disruption.

Although identifying and fixing structural flaws of other similar business complexes, developing emergency preparedness & response plans and establishing proactive safety management system within private businesses will definitely take some time, Bangladesh cannot afford to lose its foreign retailers by not meeting the basic safety requirements just now. The country and the private sector need to move together and faster if they want to recover and restore the garment businesses as ethics, brand image and consumer awareness are rapidly becoming the competitive grounds for the growth of any organization. Further delaying and not meeting the basic safety standards might signal the international market or retailer brands to diversify to other countries which can provide with private businesses which are safety compliant, better prepared to face such disasters, have capabilities to respond to such emergencies and are well equipped to quickly recover from the tragedy.

When a disaster like this (collapse of Rana Plaza) occurs, the entire business community including the supply chain might go frantic, not sure what to do next. Now, let’s imagine the extent of  multiplying impact when a disaster like this replicates many times over in the event of a massive disaster, say earthquake which indeed is looming over us as one of the greatest risks. When the scale of disaster is enormous, even the government and outside agencies become helpless in supporting the private companies before it is too late. According to the Insurance Information Institute, USA, up to 40% of businesses affected by a natural or man-made disaster never reopen.

After a disaster, companies would get under great pressure while managing activities related to emergency response, disaster recovery and finally continuing the business as usual. Unless these companies are prepared with adequate contingency plans guided by Disaster Risk Management (DRM) principles, it is hard to visualize their continued operation in the post-disaster scenario. During such crisis, the most urgent need of businesses would be to quickly respond to the emergency (saving lives & property) and secondly, to recover its operational activities (becoming functional & continuing business as usual) at the earliest. Hence, arises the need for a comprehensive Business Continuity Plan (BCP). BCP of an organization presents a holistic management approach which ensures that critical business functions will remain operational and the disaster recovery will be handled in a timely manner with minimal interruption. An effective BCP aligns with the overall DRM and CSR strategies, if an organization is willing to envision its long-term security, creative business leap and opportunities for growth.

BC Planning is a capability building process for an effective execution of risk reduction, emergency response and disaster recovery plans of any organization.Long-term sustainability of businesses depends on various stakeholders including employees, their families, shareholders, communities, suppliers, customers, government, media and other support groups. During an emergency, it might be overwhelming to manage them all and make quick decisions, especially when a great deal of money is involved. Therefore, BCP, a proactively thought-out procedure, can help a business to swiftly manage its resources as well as supports from other stakeholders.

Having a closer look at the increasing number of natural, human-induced or technological disasters these days, the need for BCP is aptly justified for any small, medium or large scale organization. Developing a BCP will improve the likelihood that businesses/industries will not only survive and recover themselves, but will also help their neighbors, communities and the entire country to recover more quickly. Strategically planned companies would first invest in BCP to build their disaster resilience which in turn would enable them to continue their CSR efforts in the event of a catastrophic disaster. At the same time, BC Planning itself could be a significant part of CSR building process for any organization that is truly responsible to its employees, communities and customers. If an organization's vision is well aligned with its DRM objectives and CSR values, business continuity planning is bound to happen in that organization.

The collapse of Rana Plaza building served a lesson to Bangladesh. It has woken up a great number of private sectors, government bodies, employees, stakeholders and other groups from in and outside the country. Considering the parallel in demography, infrastructure, government policies, business culture and the level of preparedness for disaster, it really brings us closer to the Rana Plaza experience and provides a real-time lesson to learn from. In Nepalese context many small, medium and large businesses, with 70% public investment in them, hold up the backbone of the country's economy. Therefore, developing BCP could prove to be the right foot forward by the private businesses. In order to support strategic DRM needs and sustainable CSR values of a company, BCP implementation could be a milestone initiative by the private businesses in Nepal. This certainly is a wake-up call to the government, private sector businesses and their stakeholders in Nepal.

The Chinese Constitutional Model at 1948 By Dr. Bipin Adhikari 22 hours, 1 minute ago

Hindutva: Mughlani versus non-Mughlani By Dipak Gyawali 4 days, 17 hours ago