As Nepal has been passing through a severe security crisis following agitations, Chief of Nepal Army General Rajendra Chhetri has expressed the commitment to defend the national unity 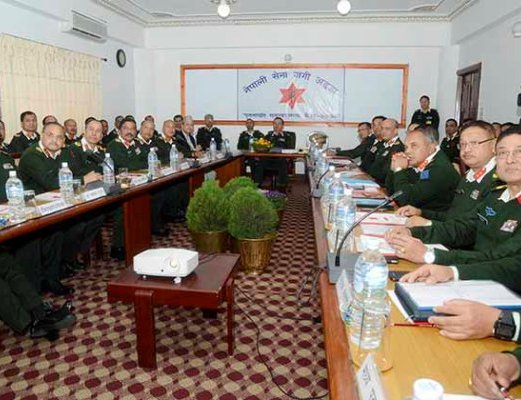 At a time when Nepal has been passing through a severe security crisis and demands of ethnic and regional secessionists are appearing, Nepal Army, one of the major factors of National unity, has expressed its concerns in mature wordings.

“Although there is a certain improvement in the situation following the efforts made at various levels, the situation has not completely normalized. The present activities are political in nature but their immediate and long term effects will be on national security, national integrity and constitutional stability and development,” said COAS General Rajendra Chhetri in his address to Nepal Army Personnel on Nepal Army Day. “Nepal Army is always prepared, committed and capable to fulfill its duty given by the Nepal’s constitution in an effective manner. It is the main responsibility of Nepal Army to fulfill the responsibility given by the government through the constitutional process for the broader interest of people and country.”

“We all know that security actions are just means to create a conducive environment for political negotiations. The sustainable solution of security challenges should only be achieved politically,” said COAS General Chhetri.

With the promulgation of the new constitution, Nepal has been facing all kinds of challenges particularly the threat on its national unity on the basis of region and ethnicity. COAS General Chhetri’s statement showed that Nepal Army is alert to thwart any threat.

Although the situation is now calm and quite in southern plains and other parts of Nepal in surface, political parties, which oppose the promulgation of new constitution, are launching bloody political agitations, and are planning to come out with more agitation to paralyze Nepal.

Along with 11 points demand of Madhesh based mainstream parties, some armed groups with separatist outlook are launching agitations with secessionist demands, meaning Nepal’s internal security is in severe strains. After continual deployment to quell the agitation, Nepal Armed Police and Nepal Police are oversaturated.

The coordinative meeting of Division Chief 2072, among others, briefed on the deteriorating internal security situation and possible threat to national unity and integrity of Nepal. According to a press release issued by Directorate of Public Relations of Nepal Army, the high level meeting discussed current security challenges, possible security threat in future and the present state. The meeting of top level army brass also evaluated their roles to handle the future challenges.

COAS General Chhetri said that the country, people and constitution are sources of inspiration of Nepal Army and Nepal Army is aware about the concurrent situation and ready to fulfill the responsibility given by the government. The army also said that Nepal Army is prepared to take any responsibility given by the government in reconstruction of earthquake devastated infrastructure in various districts.

Summing up the meeting, COAS General Chhetri said that security actions are just a means to create appropriate environment to mediate the political process. The solution of sustainable security challenges can be found only through political means. However, Nepal Army will automatically be mobilized under the legitimate direction of government in case of threat to national unity and integrity and separatist movements. COAS General Chhetri also said that there is the need to formulate a security policy taking people and country under national security. He also directed chiefs of division and other army officers to take a special consideration on new developments and challenges of operation along with their regular responsibility.

As COAS General Chhetri highlighted the security challenges of the country, a section of people see his statement as directed against the provincial boundary and state restructuring.

“Nepal Army has not said anything about the boundary of the provinces. State restructuring and forms of government are political agenda. The parliament can decide on these issues. However, Nepal Army’s concern is the growing tendency of threat to Nepal’s integrity and unity, which is a concern of all Nepalis,” said Brigadier and spokesperson of Nepal Army Tara Bahadur Karki. "The address by the COAS is for Nepal Army personnel and it gives the guidelines for Nepal Army.”