URMILA CHAUDHARY Award For Cause 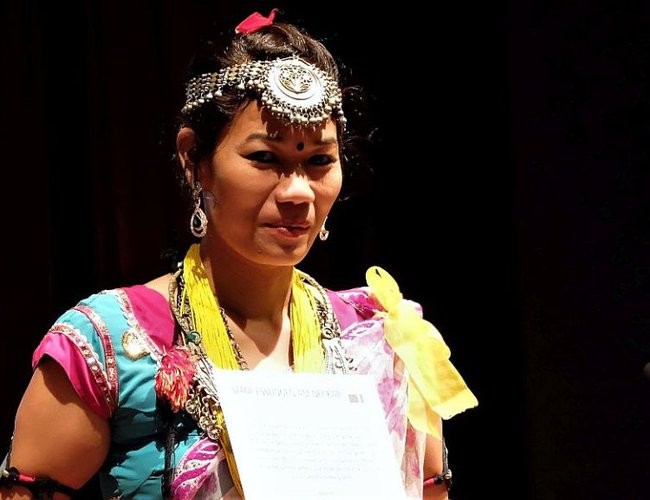 In early July 2017 the city of Esslingen, Germany bestowed the Theodor-Haecker-Price, an International Human Rights Award for political courage and sincerity, on Urmila Chaudhary.  Urmila is the first South Asian prize-winner since its existence in 1995. In addition, the project HEROES in Berlin, that campaigns for equality and human rights within the so-called “honor cultures” (where women are underprivileged), received another award called the “Ehrengabe” (honorary gift).

The Human Rights Prize is awarded every two years in commemoration of Theodor Haecker, an author, philosopher, and cultural critic. He lived in Esslingen for the greater part of his life and was denied freedom of speech and shadowed during National Socialism. In remembrance of his name, outstanding personalities and groups should be prized with this honor for their special commitment to human rights, freedom, peace, humanity, and democracy. 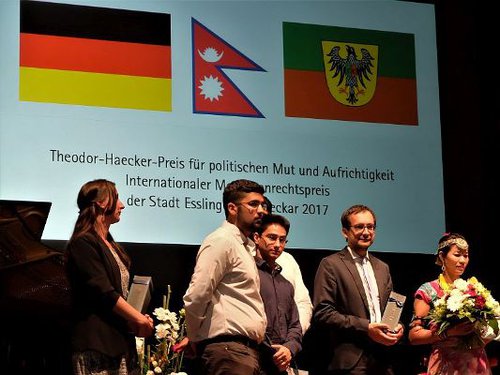 Those who take a look at the list of former prize winners immediately realize that it was mostly women who received this recognition. "This fact is not surprising. In many regions of the world women find the courage for resistance. They are often the ones who have to suffer from discrimination and oppression." explained mayor Dr. Jürgen Zieger in his introductory speech. Discrimination and oppression initially characterized the life of Urmila Chaudary. Urmila grew up in Manpur, a village in Dang district. Until her age of six, her life did not seem all that different to the life of other Nepali children.

The decisive and terrible turn happened during the Maghe festival which is traditionally celebrated in January. At this feast, young girls are sold to rich and influential families in the big cities. These children have to work as household staff from the early morning until late at night. They have to wash, cook, clean and perform other tasks. Violence and abuse is not excluded. This deal is often the only way for the poor and landless parents to earn money.

They cannot imagine the slave-like conditions they send their children to, far away from home. In Nepal, debt bounded labour can be traced back to the 18th century. The Kamaiya and Kamalari traditions which are debt bondage and serfdom, are mainly rooted in the West of Nepal. Reports indicate that the eradication of malaria and the promotion of national integration by the government in Kathmandu triggered a migration of hill people into the Terai region. The Terai is called the granary of Nepal. It supplies the inhabitants with staple food. Therefore, the new settlers took over the land cultivated by the resident ethnic Tharu group.

As the Tharus had no official land registration and records, the consideration for their property was very low. Thus, the new landowners employed the locals as agricultural laborers. The scant wages, additional loans and exorbitant interest led to a debt bondage which has been passed down for generations. In Kamalari tradition young girls and women are sold by their parents for one or more years to higher caste families outside the Terai. The lord and mistress pay a puny price for the children. In most cases their promise to send them to school is broken. This is exactly what happened to Urmila. She was quite certain that she would go to school soon, after being brought to the next bigger city by her brother. It was not until Urmila had arrived in the huge capital city of Kathmandu – where she had to address her new mistress with "your majesty" and take the children to school, without going through the school gate herself - that she suddenly realized she was somehow different to other children. The confinement, the insults, and the humiliations of the second mistress who was working as government official at that time, must have been terrible. Even today Urmila feels still guilty when she remembers how she had left her mistress and had not returned after a home visit.

Urmila has never given herself up during her time as Kamalari. In fact, she developed an indescribable will and fighting spirit. She learned to read and write with the help of the children living in the household. Her desire for education and further development is tremendous. Only after her liberation at the age of 17 and with the support of the organizations Nepal Youth Foundation and Plan International, did Urmila´s wish going to school finally come true. In the year 2000, the Kamaiya system was prohibited by Nepali government and the debt bounded labour was abolished.

The Kamalari tradition was in fact disregarded; however, the Nepal Youth Foundation was one of the first organization to hold protests. The demonstrations showed their first successes in 2006. The Supreme Court announced the prohibition of the Kamalari tradition. A further milestone was achieved in 2009 when the government assured financial support for former Kamalaris in school education. Just four years later, in 2013, the Government announced the official end and the abolition of the Kamalari system. 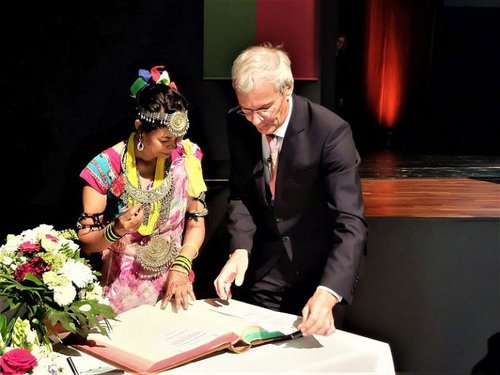 After her liberation, Urmila and her fellow sufferer freed other Kamalaris from bondage. They visited the surrounding villages. They informed and explained the inhuman situations in the households in the form of dramatic performance on stage to parents and villagers. The parents were shocked. They had no idea of the circumstances under which their children had to work. What other choice did they have? Fighting and struggling for pure existence and satisfaction of basic needs. Is this action comprehensible in the rich countries of the Western World? Urmila does not blame her father. This is not common in Nepal. Decisions made by the parents are highly respected and accepted.

Urmila says: "I did not ask my father why he had sent me away. My parents suffered just as I did. I do not want us to have to go through that again." As a consequence of the awareness and actions organised by Urmila, the revolt in the country and the efforts of national and international organisations over 13,000 Kamalaris could be freed from the slavery. Continuing programs run by these organizations help the girls to get an adequate education and live an independent life with opportunities to earn their living. There are still approximately 100 to 150 girls working as child slaves. Rescuing these children is still difficult. The lords and mistresses are government officials, teachers, and other persons of the high social class. For the first time, the publication of the book "Slave-child" in 2011 drew attention to the fate of now 27-year-old Urmila.

The film documentary "Urmila– my memory is my power" was published in 2016 and reports on her work and her fight for freedom. Now Urmila has been in the spotlight again. The award ceremony praises Urmila´s outstanding commitment and dedication to the liberation, rights, and education of enslaved Kamalari girls. In addition, her work for the organization, Freed Kamalari Development Forum is highly esteemed. Urmila finished her college exams just before commencing her trip to the award ceremony in Germany. This graduation enables studying at universities and colleges of higher education. She would now like to study law to increase the ability to have more influence on people´s lives, as well as on the compliance with and implementation of laws and rights.

Congratulations on your great achievement, Urmila! You and people like you are the ones who change the world.

Pretsch is a Journalist and Writer

Book Remembering Past By A Correspondent 3 days, 11 hours ago

Book Nepal And The Great First World War By A Correspondent 6 days, 13 hours ago