A picture is worth a thousand words, especially when it is authentic and genuine. Citizens like to see their elected representative with sleeves rolled up to the elbows and boots full of mud collecting debris and helping victims. 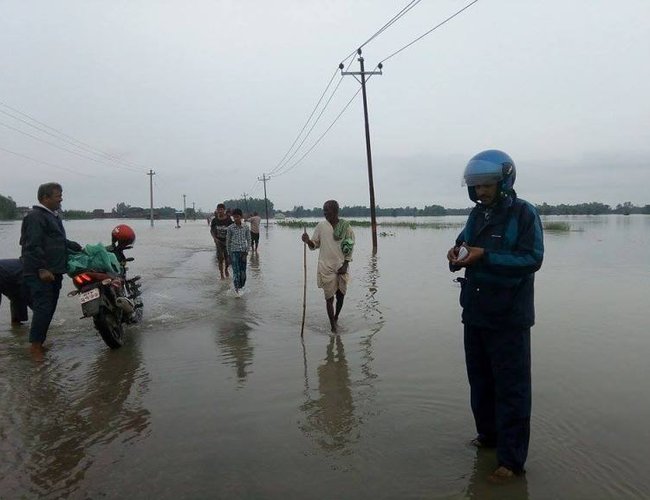 Natural disasters have always existed although we have seen them increase in number and destructive power lately. Nepal is a disaster-prone country. In Nepal, we have frequent natural calamities such as floods, storms, and landslides that become real disasters due to the lack of adequate risk management and preparedness.  Whenever disaster strikes, nature is blamed and it is stated by the authorities that nothing can be done against these happenings.

The earthquake trail is still visible in parts of the country, where debris still lies strewn in the streets and where some partially destroyed buildings are still standing in places like Kathmandu, the capital of the country.

In eleven districts, due to the heavy floods and mudslides caused by the torrential rains, 132 people died, more than 50 went missing and thousands of people, who lost their homes, have been forced to move due to flooding. Many people are adversely affected by the government's delay in distributing aid. This very issue should not be a political topic.

Political elites who are in constant competition are prone not to leave any stone unturned when it comes to making political capital. Natural disasters are becoming a social media tool for publicity seekers.  Sometimes they fight over who will distribute the relief aid.

Crises are a determining factor in the construction of the narrative of politicians. In the circumstances of crisis, what politician does or says adds value to their political career because of the emotional factor.

When all the parties should have focused on doing the relief work together, the leaders of the ruling party and opposition were fighting on nonsensical issues. These leaders are trying to get the political mileage from natural disasters while thousands of people were waiting for relief for several days under the open sky, under harsh rain and the sun. It was necessary to leave behind all other things to save the people first.

It is certain that there was a hunger for political gains. Every leader wanted to present himself as a true philanthropist. Time and time again, we see the price tag of any man is nothing more than just one vote. It’s time for us to understand whether our status in this country is just equivalent to a vote or more than that.

Most of the time humanitarian help and aid comes quickly and with great publicity. Then the aid will begin to be delayed by bureaucratic procedures in order to find a suitable way get to the disaster area. Meanwhile, many perishable provisions will be damaged. Another form of corruption is in distributions based on partisan preferences rather than the need of those affected.  People who truly need help will not receive it. However, politicians and their cliques will have the cream of that help for themselves.

We do not have good experiences in reconstruction because when aid arrives, corruption arrives. However, the frequent disasters are not directly proportional to the number of lessons learned to improve the disaster management system.

A picture is worth a thousand words, especially when it is authentic and genuine. Citizens like to see their elected representative with sleeves rolled up to the elbows and boots full of mud collecting debris and helping victims. It does not only add great value, it is a sincere, inspiring moment that generates the sense of hope and social cohesion to the victims and their families.

Our government is still struggling with immediate relief to save people where our disaster management mechanism is quite confused. There are lapses in every disaster.  Politics seems to be derailing relief efforts. There should be no agenda other than to help the people. Political parties and NGO’s are capitalizing on disasters like vultures feeding on carnage.

In times of natural disaster, like in every other country, people of Nepal also look up to the government for solutions but most of the time our politicians use disasters to further their political career for their vested interest.

We have no comprehensive risk management, much less well-organized disaster alert systems or emergency plans. That is why when some catastrophe happens, we begin to improvise in the measures that are taken. This results in innumerable problems such as slow decision-making, delay in helping victims (food, drinking water, clothing, medicines), lack of places with adequate sanitary conditions to accommodate large numbers of people, there is no preparation to face collateral effects such as health risk from possible epidemics or rescue of injured people.

Logistical problems also arise, and in many cases cannot be efficient in receiving donations and help. All this generates even more sufferings for the victims. People are assisted very little by the state and only receive some credit or materials to rebuild their homes, although in many cases receive nothing.

The destruction of the housing may have other major long-term impacts on a society. Health problems have short and long term consequences. Human society is being stressed by growing destructive or altering events of their quality of life, whether by causes of natural origin or created by human action.

Regardless of all these measures by the government, awareness for effective disaster management is the first condition, in which relief agencies can be brought to the affected areas immediately. If people are not aware of disasters, then terrible destruction becomes the biggest obstacle in the way of relief. By providing the basic information needed to rescue people from the disaster areas, the damage caused by disasters can be reduced as much as possible. Proper communication, honest and effective leadership, planning and coordination, etc. are very important for disaster management.

Unclear coordination between agencies dealing with disasters can open up opportunities for corruption. Due to poor coordination, no one knows which areas have received assistance and which have not, especially if the delivery and receipt of assistance is not accompanied by proof of delivery and acceptance. This type of aid is very vulnerable to leakages and under the table issues, especially in the form of cash and the type of aid that can be cashed in the future. At the policy level, coordination issues can lead to overlapping policies, including policy goals. Disaster projects can be vulnerable to manipulation when the same project with different budgetary sources is implemented in the same target area.

Blaming others is not accepting your responsibility so pointing a finger at others is not the solution to your problems. The disaster must be faced, prevented, and minimized. There should be no other agenda than to help the people but political parties and NGO's are capitalizing on disaster. The political parties think natural disaster is a time for their politicians to shine. The politics behind natural disasters has gone too far. Let's not do politics with natural disasters. These disasters are a signal, telling us that there is still a higher force that controls us.

PM Deuba Received A Telephone Call from US Secretary Of State By NEW SPOTLIGHT ONLINE 2 days, 8 hours ago