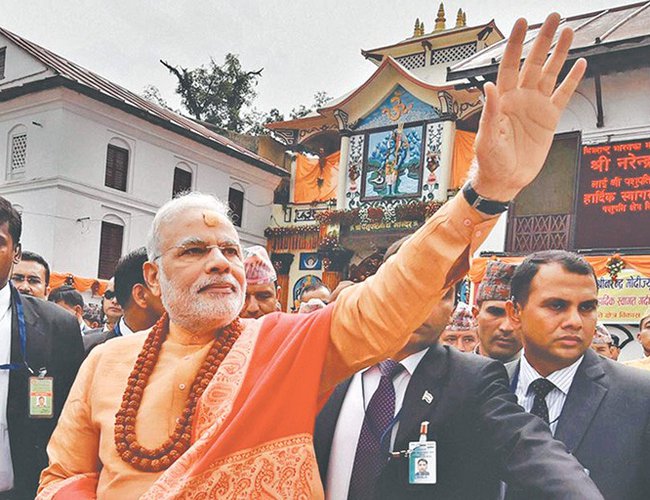 Officially Narendra Modi is the Prime Minister of India, as a person, he is a devout Hindu, having an affection towards the Hindu shrines and religious places of Nepal.

Since his election as the prime minister, PM Modi has been attaching a high importance to the civilization commonalities between Nepal and India.

He worshipped at the Pashupatinath temple with full devotion to the gods as a Hindu and called on Nepalese leaders to come closer with India for all round development. Modi addressed Nepal’s Constituent Assembly urging Nepalese political leaders to write a constitution integrating and uniting Nepal. He called for a constitution to unite Nepal on religious, social, ethnic grounds.

Nepalese intellectuals even made PM Modi’s individual respect to his faith as a mockery portraying his personal visit to Pashupati Temple in humorists’ manner. Despite enough good gestures, Nepal-India relations were in the lowest level in the last few years.

During his first state visit to Nepal, Indian Prime Minister Modi offered a special worship to the Pashupatinath Temple, one of the most scared temples of Hindus all over the world, like Mecca and Vatican.

However, Nepalese political leaders and intellectuals, who have accepted all hegemonic conditions of previous Indian establishment unconditionally, did not reciprocate to the softer stand of Modi. Worse, Nepalese political leaders treated Modi’s advice to promulgate the constitution recognizing Nepal’s religious, cultural and geographical importance as an interference in Nepal’s internal affairs.

Rejecting good gesture of PM Modi, Nepalese leaders harped on anti-Indian slogans, which extended up to blockade. Against the advises of PM Modi, Nepal promulgated a constitution, which has not only brought Communists in power but also eroded Nepal’s state authority.

Working to bring India and Nepal closer, PM Modi is now paying the second official visit and third visit to Nepal. This time he will pay homage to Janaki Temple of Janakpurdham, birthplace of Sita or the house of father in law of Rama. However, there are more signs of hostility coming from a group of people.

As announced, India’s Prime Minister Narendra Modi will arrive for a two-day state visit to Nepal on May 11. Along with official talks and formal programs, Prime Minister Modi is likely to offer special prayer at Janaki Temple.

Since his early days, PM Modi has called on Nepal, India’s neighbor, with a message to come closer. Nepal shares civilizational links with India. However, Nepalese leaders were unable to respond to the prime minister of the world’s emerging third largest economy with a positive gesture. Similarly, Indian PM’s own establishment is also unable to translate his commitments to reality.

He walked the street of Kathmandu, even breaking his high security barriers and people embraced his as a brother of same faith. When earthquakes devastated Nepal badly, Nepalese prime minister late Sushil Koirala was on the air flying over the space of Indonesia.

As Nepalese were hard hit by earthquake, Modi sent all necessary equipment, rescue team and other materials to save the Nepalese. Indian rescue teams worked side by side with Nepalese security forces rescuing people and provided much needed support.

After earthquake, everything has gone the opposite way. Instead of writing an inclusive constitution to unite all Nepalese, Nepalese political leaders promulgated the constitution, fabricating Nepal into seven provinces.

Instead of strengthening Nepal’s unity, the constitution promulgated by Constituent Assembly provided so much authority to different tires of government giving local and provincial government power equally.

Although PM Modi in his first official visit highlighted Nepal as a country of three regions, stressing for Nepal’s unity, the divisive policy followed by his predecessors to divide Nepal on the basis of regions, Madheshi and Pahadi, who share same religion and culture, continues.

Although PM Modi has shown his respect to Nepal’s religion and culture indicating to make Nepal as an old state with its own century old identity, Nepal’s Constituent Assembly promulgated a constitution which disregards all its traditions and civilization continuity with India.

In the name of Madheshi, Modi’s predecessors  have created a division of Madheshi Hindu and Pahadi Hindu, dividing the people of same civilization into two folds. Modi’s views to see single Hindu Civilization in Nepal is yet to materialize. Despite PM Modi’s such a positive message, India’s old policy towards Nepal is yet to see any changes.

Former foreign minister Mahendra Bahadur Pandey argued that Nepal cannot promote its national interests if its foreign policies with India and China are guided by a sense of fear and threat. "We often say balanced relations with both neighbors. We cannot achieve what we want if we only think about pleasing them. We should learn not to make any compromise on issues related to our sovereignty," he said.

He said this addressing the talk program organized on the theme of Nepal-India Relations: Evolved Dynamics. The former foreign minister said our politicians and bureaucrats are largely to be blamed for the unwarranted foreign interference in Nepal.

As Nepal is passing through a period of major political transition with central, province and local levels seeking their political space and resources, Indian PM Modi’s visit to Nepal is significant.

With his hectic visit of China and several rounds of formal and informal meetings with Chinese leaders, PM Modi’s message and gesture in his visit will be very important to observe.

Former foreign and finance minister Dr. Ram Sharan Mahat argued that the relations between India and Nepal should embrace new realities in both the countries. "Government should stand tough in promoting national interests and has to clearly articulate its position on issues of mutual interests. There is no need for Nepal to make compromise on issues concerning national interests in its dealings with any of the neighbors," he said, while complaining that Prime Minister K P Oli had failed to raise the issues of Nepal's immediate concerns. "There is a kind of inherent bias against Nepal in Indian media. This somehow provides reflection of the South Block.”

As PM Modi is coming in Nepal’s southern plain with gesture of friendship, two prominent Madheshis have already whistled, terming the visit against the interest of Madhesh and Madheshi people.

It showed that the seed of dissension sowed by Modi’s predecessors continue in Nepal. The dissensions expressed by Madheshi leaders are indications how it is growing.

Sitaram Agrahari, former editor of leading Nepali daily Gorkhapatra, termed Indian PM Modi’s visit to Janakpurdham will not bring anything to Madheshi people. Agrahari writes in his Facebook wall that New Delhi is pleasing PM Oli and ruler of Kathmandu rather than raising the voice of Madheshi.

Similarly, former minister and leader of Madhesh based party Jaya Prakash Ananda Gupta sees the preparations and high significance given by the present  Madehsi government is unusual. In his Facebook wall, Ananda expressed his reservation on Modi’s visit to Janakpurdham.

Even a radical underground group exploded a bomb at a hydroelectricity project office in Nepal, weeks before its scheduled inauguration by Modi.

“Just a month after hosting K P Oli on his first visit abroad, the ties between Nepal and India are warming. Modi will visit Kathmandu this year for the BIMSTEC Summit,” writes Indian media.

Indian media also writes that the visit is planned as following PM Oli has responded positively to the Indian gesture. The date, proposed by the Indian side, was endorsed by Prime Minister KP Sharma Oli.

As Indian Prime Minister Modi has been calling Nepal to walk side by side with India to achieve higher economic growth and share prosperity, how Nepal will respond to PM Modi is yet to be seen. How Indian establishment will follow PM Modi’s vision  to translate into reality will also important. If Nepal responds to Indian PM’s call positively and Indian officialdom support this move, this will open an all-round economic development in Nepal.

US Jet Crashed In Taliban Territory By NEW SPOTLIGHT ONLINE 5 hours, 25 minutes ago