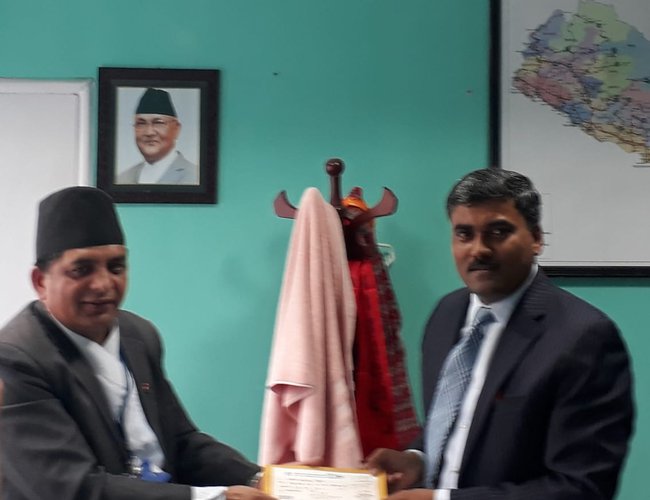 According to press release issued by Embassy of India in Kathmandu, on Tuesday, May 29, 2018, Dr. Ajay Kumar, Deputy Chief of Mission in the Indian Embassy in Kathmandu handed over a Cheque for an amount of INR 33,10,78,758.00 equivalent to NRs. 52,97,26,012.88 (Nepalese Rupees Fifty Two  Crore Ninety Seven Lakh Twenty Six Thousand Twelve & Paise Eighty Eight only) to the Secretary, Minister for Physical Infrastructure and Transport Madhusudan Adhikari at Singha Durbar, Kathmandu. The amount has been released towards 25% of tendered cost (including 10% mobilization advance) of the two road packages of Birgunj-Thori Road being implemented under Postal Highway Project in Nepal with Government of India’s grant assistance. With this payment, the Government of India has released a total of INR 117.63 Crores (equivalent NPR 188.21 Crores) to the Government of Nepal for implementing 14 packages of the Postal Highway Projects.

So far, construction of two roads of Hulaki Rajmarg (i) Dhangadhi-Bhajaniya-Satti road & (ii) Lamki-Tikapur-Khakraula road have been completed with Government of India’s grant assistance worth NRs 1020 million which were inaugurated on 19 January 2017.

Since 1950, the Government of India has been supporting infrastructure development of Nepal and has provided financial assistance for construction of various Highways, Roads, Bridges, Airports, etc. as part of its multi-sectoral and multi-dimensional India-Nepal Economic Cooperation Programme.