All The PM’s Men

With over two thirds of majority in the parliament, prime minister KP Sharma Oli is running the government. Who influences him in his decisions? 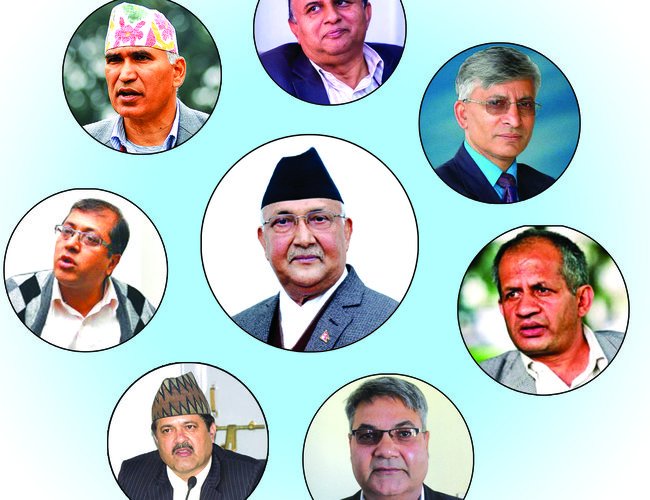 As Chanakya said the prince’s ability to take decisions was determined by the persons with whom he would out. He further said that the quality of a successful prince was his ability to choose the best persons in his inner circle.

Every prime minister wishes to be successful, exploiting the political power and state authority, and Prime Minister Oli is not an exception. In his last four months of tenure, Prime Minister Oli has already taken a number of decisions to make his office powerful.

Prime Minister Oli needs his own small group of people to advise him and help him execute his vision. After the merger of two leading communist parties, Prime Minister Oli has, no doubt, become most powerful man in the country.

Prime Minister Oli is now preparing for his China visit. Foreign Minister Pradeep Gyawali, who was on the way to Mongolia, visited the Chinese capital to discuss about the preparations for Oli’s forthcoming visit.

From party unity to bringing his relations with India back on track, Prime Minister Oli has taken major decisions over the months. Although PM Oli is the front face, there are a few of his own trustees, who have been working behind the screen.

As Prime Minister Oli is walking a very tightrope, he is relying on his kitchen cabinet to make decisions. For the last one decade, Principal Secretary Bishnu Rimal, a very well known leader of Trade Union Federation, has been a close ear of KP Sharma Oli.

Prime Minister Oli appointed Rimal as his official political advisor. Rimal has a direct access to prime minister all the time. Having experiences of working in different tires of national and international organizations, Rimal can also guide Prime Minister Oli on his visits to foreign countries.

Pushing all his colleagues behind, Bishnu Paudel, general secretary of unified party, has become another most influential member of Oli’s kitchen cabinet. Foreign Minister Pradeep Gyawali, former speaker Subhash Nembang and chief minister of Province 4 Shanker Pokharel and President Bidhya Devi Bhandari are in the first line of the kitchen cabinet.

Although there are several others in his team, this first line of his kitchen cabinet influences all major decisions of Prime Minister Oli. The first line has the final say on all matters.

In economic policy matters, Oli’s team depends upon finance minister Dr. Khatiwada, who was a part of the finalization of economic agenda of communist alliance during the elections.

Although foreign minister Pradeep Gyawali is one of the closet political colleagues of Prime Minister K.P. Sharma Oli, Rajan Bhattarai, a soft spoken and JNU scholar, is a person with a direct access to Baluwatar.

With the recent decision that inducted Bishnu Poudel as the party’s general secretary, deputy prime minister and defense minister Ishwor Pokharel, who used to be a master player in Oli’s camp, has lost his entrusted position.

Although she is in the ceremonial role, President Bidhya Bhandari prevails over major decisions taken by Prime Minister Oli and, thus, plays a key role in PM Oli’s decisions. One insider even said that Bhandari can overturn the decisions.

Bishnu Poudel, who sided with Bam Dev Gautam when CPN-UML split, has made such a rise that he pushed many of his colleagues, including Ishwor Pokharel, far behind. Along with helping Oli take major decisions, the Prime Minister’s kitchen cabinet is also able to tranquilize former Prime Minister Madhav Kumar Nepal and tame the unpredictable and cunning leader Pushpa Kamal Dahal Prachanda.

With tactful people in his kitchen cabinet for political maneuvering, Prime Minister Oli is leading the government by balancing all the sides. It is a matter of test for the kitchen cabinet to handle the obtaining political crisis.

Nepal Has Made A Steady Economic Progress In The Last Three Years: Prime Minister Oli By NEW SPOTLIGHT ONLINE 1 week, 5 days ago

Youth, Politics And The Future of The Nation By Deepak Raj Joshi 3 weeks, 1 day ago

Cabinet Reshuffle Is Not An Agenda Now: PM Oli By NEW SPOTLIGHT ONLINE 3 weeks, 5 days ago