His Beijing visit is likely to resonate in Kathmandu’s relations with Delhi. 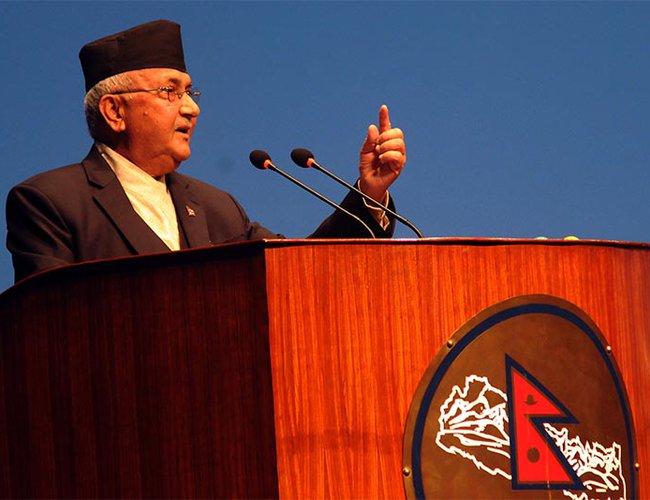 “India has really opened my eyes,” Mahesh Maskey, Nepal’s former ambassador to China, quotes K P Oli as saying during a briefing he had with the prime minister when Nepal faced a scarcity of essential goods because of India’s blockade. In an article, Maskey recalls how Oli, disappointed over his failure to mend ties with India soon after Nepal promulgated its constitution in September 2015, chose to explore the expansion of transit and multi-dimensional relations with China. In March 2016, Prime Minister Oli visited Beijing and signed a framework of understanding.

Oli’s two visits to India and Prime Minister Narendra Modi’s recent trip to Nepal have helped the two sides to bury the past bitterness. But speculation is rife in Kathmandu about how Oli will conduct himself when he embarks on a six-day visit to Beijing beginning Tuesday. The CPN commands two-thirds majority in parliament and maintains a worldview that continues to be anti-India, and by extension, pro-China.

PM Oli will have one advantage when he visits Beijing since the public opinion is in favor of Nepal signing agreements and projects with China. “Oli will be surpassing his own record if he takes his last visit forward and transforms the previous understanding on transit into a full-fledged agreement with well-thought-out protocols,” says Maskey. Nepal’s current ambassador in Beijing, Leelamani Poudel, too seems to have endorsed this view.

Oli’s wide-ranging development promises — from introducing centrally distributed gas pipelines, exploration of petroleum products with China leading to ending the dependence on India, the land-locked country having its own flag-bearing ships, and his recent advise to party MPs to rent houses some 200 km away since soon-to-be introduced trains will transport them to the capital in an hour’s time — are now seen and debated more as jokes than as dreams the PM want to realize.

The China visit offers him a window of opportunity to refurbish his image. Any deal with Beijing that promises time-bound execution of projects will boost Oli’s popularity. “Don’t undermine the PM’s commitment for development. He had given a detailed list of how and where India has faulted on its promise and delivery on development projects, during his one-on-one meeting with Modi,” according to a prominent minister, who will be travelling with the PM to Beijing. “We are not going to compromise on our sovereign right to undertake developmental projects and in choosing partners for the purpose,” he said.

Nepal’s decision to involve China in the hydro-energy sector in a big way and proceed with the power trade agreement is likely to have a major impact on policies and approach that India adopted towards Kathmandu from the Nehru era. Preferential rights over Nepal’s water resources and treating it as a part of its security umbrella have been part of the Nehru doctrine, something that Nepal has been reluctant to agree to. Way back in 1959, veteran socialist leader and Nepal’s first elected prime minister, B P Koirala, refuted Nehru’s statement that the Himalayas were the natural frontier of India in the north, and that India will consider any attack on Nepal as an attack on itself.

In 1960, the Koirala government signed a treaty of friendship with Beijing, something that China seems eager to amend and upgrade.

In 1962, King Mahendra tried to address India’s warning that communism will finish off the monarchy in Nepal when he invited China to build the first road connecting Kathmandu with Tibet — his famous statement was “communism will not come in a taxi”. In 1988-89, the Rajiv Gandhi government imposed an 18-month long blockade after King Birendra’s regime negotiated the purchase of arms and ammunition from China.

CPN-Maoist Centre chief Pushpa Kamal Dahal resigned as prime minister in May 2009, ostensibly because political parties including coalition partners in the cabinet opposed his sacking of the then army chief Rookmangud Katawal. But some believe that Dahal did not want to proceed on a scheduled China trip as he was under pressure from Delhi not to sign a treaty of peace and friendship between Kathmandu and Beijing.

Meanwhile, the Eminent Persons Groups Nepal and India set up two years ago to review the entire gamut of bilateral relations and suggest a review of the 1950 treaty of peace and friendship, is likely to submit its final report next month.