“DCC Is More Than A Facilitator”

As there is a growing dispute on the role of local level, province and center, Chairperson of District Coordination Committee of Gorkha District Ashok Kumar Gurung spoke to New Spotlight on various contemporary issues. Excerpts: 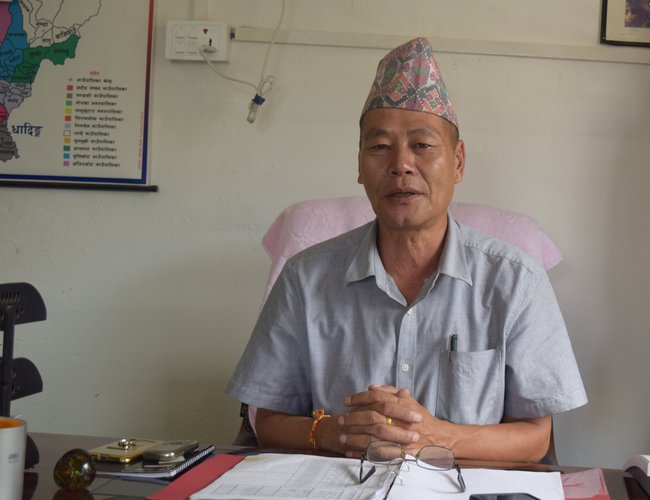 Since there are local levels, province and center involved in handling different issues, how do you justify the relevance of DCC?

Of course, there are three tiers of government, but the role of DCC is still important. Who will facilitate solution when disputes on resources and location arise between province and local levels? DCC is also there to coordinate with the center and central offices based in the district. DCC is more relevant now than in the past.

How do you say so on the role of DCC in the changed context?

Of course, our role is to coordinate among the local levels, province and center on the issues of implementing development works -- our role has not changed much.

It is said that DCC has no role except as a facilitator. How do you look at this?

We are not only facilitators but also implementers of projects. The Constitution of Nepal and new local level laws give us power of inspection and direction to local bodies regarding their work.

Are your directions and recommendations mandatory?

According to laws and the constitution, our directions and recommendations are mandatory. Except allocating the budget to local bodies as in the past, DCC has all other authorities over the local levels.

How busy are you now-a-days?

What role is the DCC playing in development sector?

We direct local levels on development issues. All municipalities and Rural Municipalities send us their programs and budgets. We thoroughly review the outcome. We also try to prevent duplication in project implementation.

In the past, DDC used to play a major role in issuing permission to NGOs and INGOs in development work. Given the changing context, what role is the DCC playing?

Of course, Rural Municipality and Municipality can directly negotiate with NGOs and INGOs on development matters. Our role here is much stronger as DCC has the role to prevent duplications of programs and projects. We are playing the role of facilitator and coordinator between local levels and civil society organizations.

Is not it an intervention in the jurisdiction of local level?

As I have mentioned to you, the Local Level Act gives us powers to coordinate and prevent duplication. It is our right and local levels have to accept it.

How do you see the pace of development following the elections of local, provincial and central levels?

The pace of development is going fast compared to the previous years. Elected representatives are accountable to the people and they know the challenges and difficulties. They also know the priority of the people. You need to wait for another year to see the real progress in the country.

How do you see the local level taxes? How is the DCC working to address them?

So far as the issue of Gorkha district is concerned, we have not received any report regarding hike in taxation. If local level hikes the taxes, we will look at it and if necessary, we also direct local levels to reverse it.

What is your impression on the functioning of local level, province and center?

It is an early stage and we are practicing a new system. Thus there are certain difficulties and challenges. So far as my own impression is concerned, we will run this system with good coordination at all levels.

How do you look at the post-earthquake reconstruction work?

Earthquake reconstruction is now in its final phase. Of course, over 30 percent houses and government and community institutions are yet to recover from the post-earthquake devastation. However, they will be completed the next year. We all have been working in that direction.

How do you see the role of INGOs and NGOs?

Some INGOs and NGOs have been doing a remarkably good work. Lutheran World Federation Nepal, in partnership with UNWFP, has launched very successful programs in our district. Their local partner Goreto Gorkha has implemented the program very well. Their programs cash for asset and food for asset have helped people living in rural parts of Nepal to uplift their livelihood. They have also helped to rebuild local level infrastructure like foot trail, irrigation canal, water tap and bridge. I find people are very much satisfied with these programs. I would like to express my sincere thanks to UNWFP, LWF Nepal and Goreto Gorkha.

Can DCC call tenders for the river excavation for sand and stone?

We have not called any tender now. Our role will be there when disputes arise between two rural municipalities. This is just a first year for us and we are learning the working modality.

How do you see the restructuring of the local levels?

After restructuring, the areas of local levels are too big. In some areas, the border is very unrealistic. In our district, one needs to walk even for two days to reach the ward office. Don’t talk about Rural Municipality office. This needs to be corrected if it is possible.

How do you see the service delivery situation after the local elections?

Service delivery system has improved and the government is now at the door of the people. People are receiving all the services at their doorsteps from their representatives. This is a major change in Nepal. Never in the history have people got such services.

What is happening to previous district level offices?

How many central offices will be there?

"Himalayan Bank At This Time Is Not So Keen To Go For The Merger" CEO Rana By A Correspondent 1 month, 1 week ago

“We Are Undergoing A Massive Change In Our Governance System” Bishnu Adhikari By NEW SPOTLIGHT ONLINE 2 months, 1 week ago