Not At The Cost Of 24-Lakh Trees

. I admire the decision to construct the second International Airport as an alternative to the TIA which is a must. But again I repeat, not at the cost of killing my 24 lakhs trees of dense charkose Jhadi. No way. 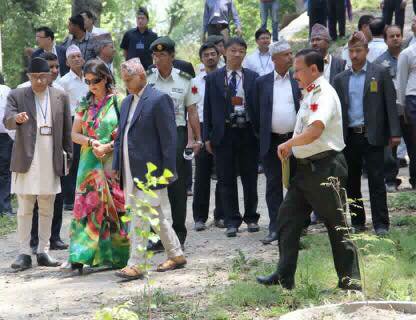 Not at the cost of sacrificing an entire ecosystem and biodiversity, along with 24 lakhs of trees! 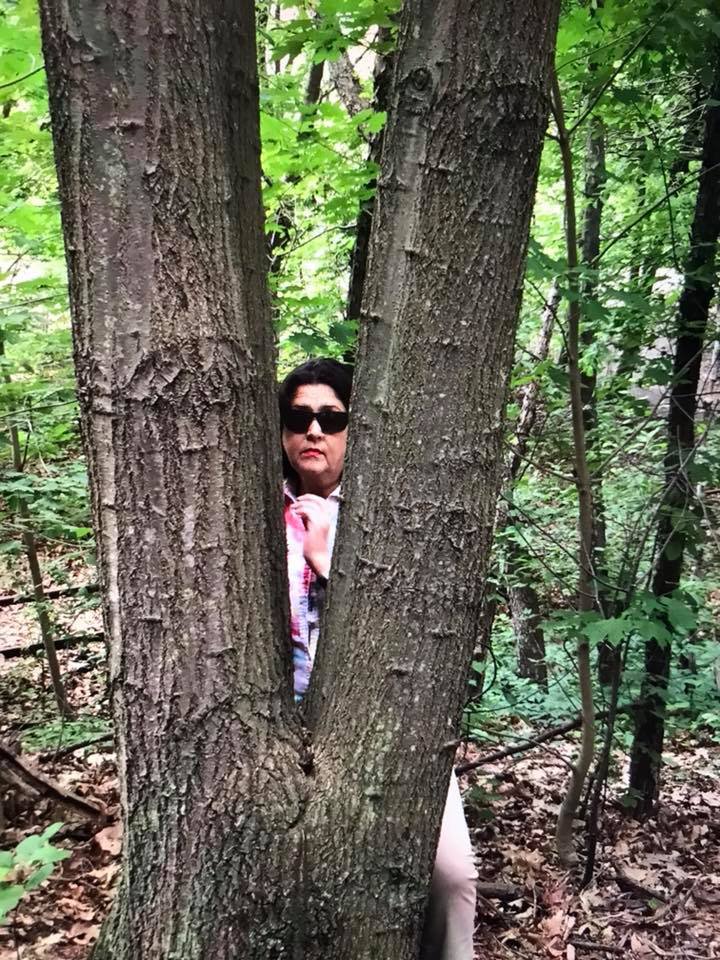 Over the past few days, I have been catching up with the news on the pros and cons of Neejgadh airport as the second international airport by sacrificing 24 lakhs of trees along that means, the entire ecosystem and biodiversity adversely impacting the animal habitat.

Being concerned about it, we, a small group of likeminded people, had held a meeting regarding how we can save the trees and, at the same time, weigh the urgency of the need of second airport while studying its EIA report.

I suggested forming a committee of all the stake holders as a pressure group regarding the issue on which we are working.

As my eyes were glued to an article recently, it mentioned that a student of environment is reminded ‘not to chop off a tree’ as a prime theme. Hence, naturally he or she will be opposed to cut the trees – an argument that struck me and made me think twice. Well, rightly quoted! 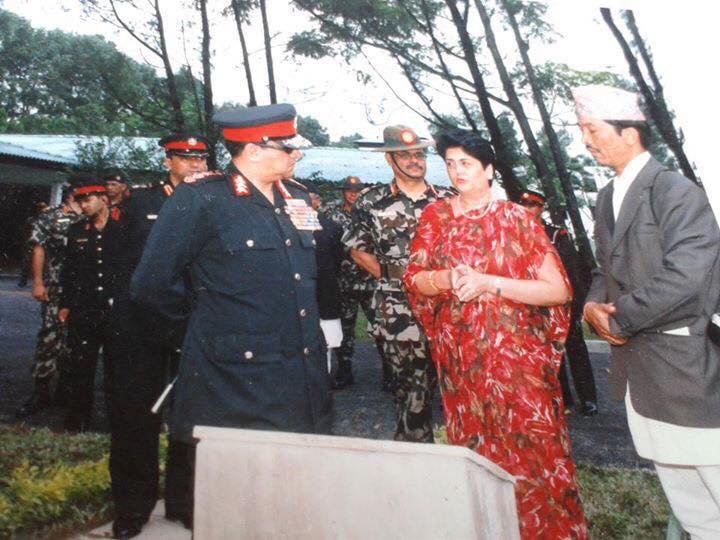 King Gyanendra with Chanda Rana at a plantation site

Again one green wave hit me on my head, “Is it not in our SANSKAR, we learnt from our childhood till now, that trees are deities, whom we should worship, and to plant a tree is as holy as 100 Gaudan (Offering of 100 milking cows on Pooja to Brahmin.)”

We learnt in the Hindu faith to worship various trees as sacred through our Hindu scriptures e.g. Peepal tree (Ficus reigiosa) , Kadam (anthocephalus) , Sal tree (Shorea Robusta), Rudraklshya (seeds of Elaeccarpus), sandalwood , Neem (azadirivachta indica) and various other trees, which have been worshipped as deities on various religious events of our life. 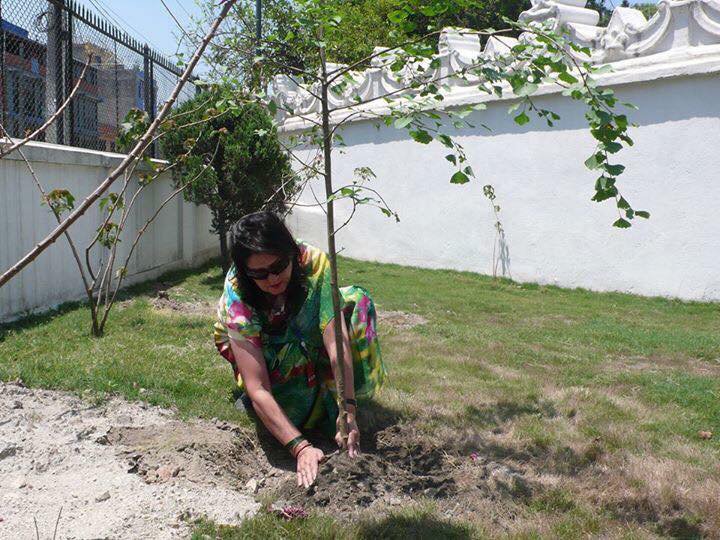 Chanda Rana Planting a tree in President's office and residence

The Bodhi tree under which prince Siddhartha achieved Enlightenment and became Buddha to the world symbolizes the importance of the tree. Not only Hindu religion, all religions regard Trees as important part of the nature, which needs to be saved.

Growing up in the Charkose jhadi (jungle with bush), at jungle camps, as a child with my father who loved nature was an inspiration to me to love the jungle. Skipping my school I used to stay in the jungle where a sweet aroma of jungle used to come all over me. Stepping on dried leaves used to produce melancholy sounds as a music to me. Fear of sighting animals with excitement used to take me to the wonderland where I wanted to belong. Solitude of the jungle along with sound of nature was an obsession to me even then. 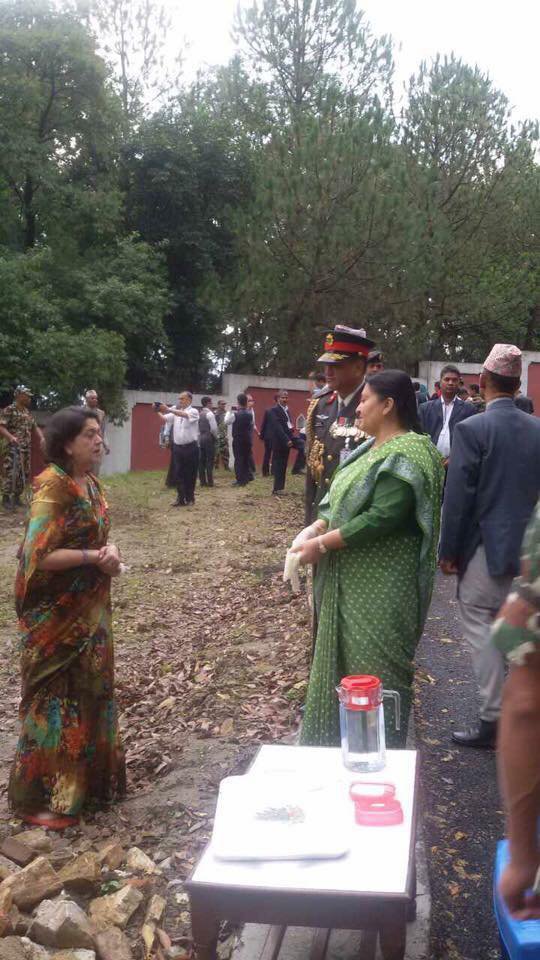 Nature under assault was a pain to me. From confrontation to coexistence with nature for future generations was an urgency to me. With the help of all the green ambassadors’ ladies, who provided volunteer services to green campaigns to preserve the mother earth, we established Save the Environment Foundation (SEF). We started project Green Kathmandu by planting thousands of trees and maintaining the place with local sponsors and self finances. We were awarded with the Environmental Award by the Ministry of Environment as the best organization to launch the first green campaign in the concrete jungle in 1994. We carried out a forestation till 2002 besides many other environmental activities, contributing to Mother Earth, which made me an “Environmental Activist” even after my retirement. 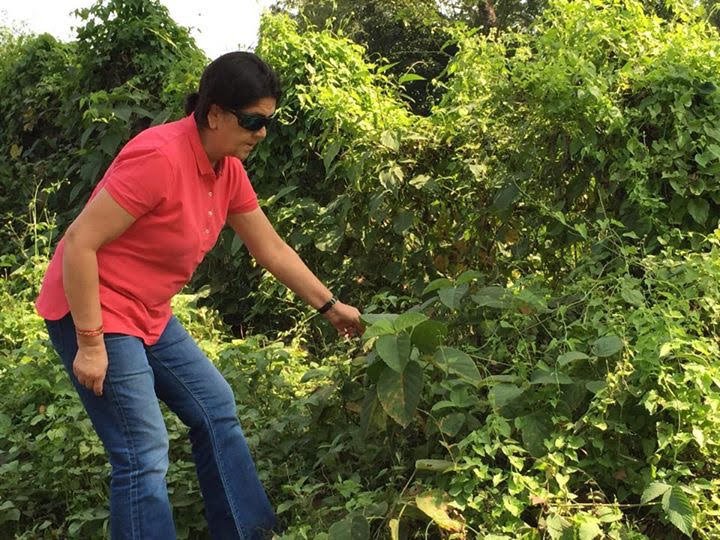 After a long gap of not visiting the jungle I loved, due to insurgency, finally I managed to go to 'Chitwan National Park (CNP)’ in 2008. While exploring the world’s Natural Heritage in CNP, my best place on earth, as Manu has described on our religious script, trees are conscious like humans and can feel the pain and pleasure. Recent environmental research indicates that trees respond to each other and human love and care. When I was in the middle of a jungle at CNP, I have felt my trees screaming to me with choking voices, as if they were in difficulty breathing over the CNP. 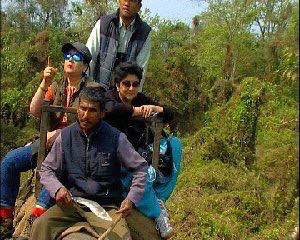 I noticed the trees at CNP were surrounded by canopies of the most notorious wild weed. Not only my trees but plants and entire grass land were covered by wild weed killing all the vegetations of CNP which had caused severe impact on our one horned rhinos and other habitats as well.

The entire biodiversity was in a serious threat. I was not aware of what was the name and origin of the wild weed then and what was going on. It shook me badly which made me prepare a documentary on my own, first of its kind, to save the trees and plants, habitats and entire ecosystem of CNP from wild weed infestation. 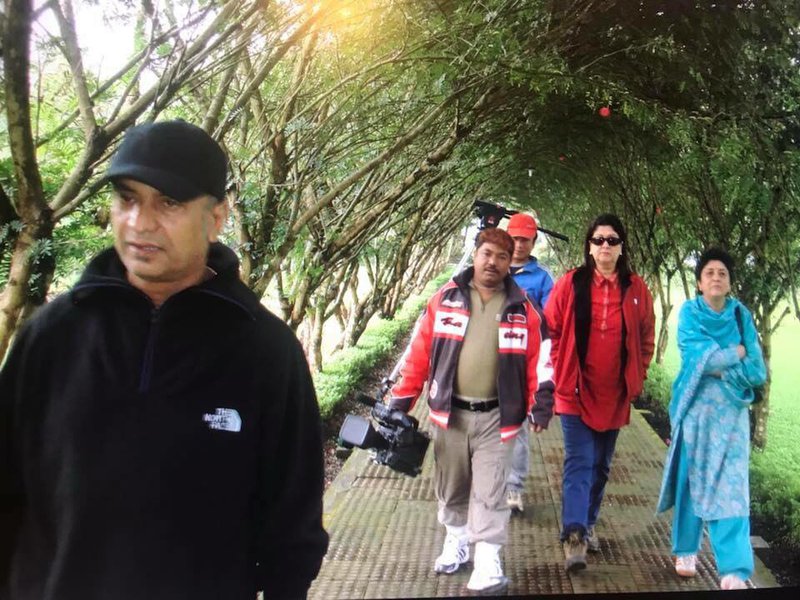 (Caption Rana on a mission to film the documentary with late Deepak Rayamajhi, first film director father of the Nepalese film industry, is seen. )

My documentary called Mile a Minute, a Serious Threat to Chitwan National Park made people aware at home and abroad as well with showed urgency to save the Trees from notorious weed called Mikania Micrantha.

For our work, we received Environmental Award in 2010 from the Ministry of Environment. Prime Minister Madhav Kumar Nepal handed it to me for contribution to save the CNP from wild weed infestation. I felt my lone battle to save the trees were now a national concern which made me happy.

Collaborating with ministry of forest, we managed to organize the first jungle conference at CNP with Prime Minister Nepal as the chief guest and minister of forest Dipak Bohara along with more than 70 MPS at Temple Tiger where I screened my documentary to chief guest and other MPS highlighting the urgency of saving the trees and habitats at CNP . 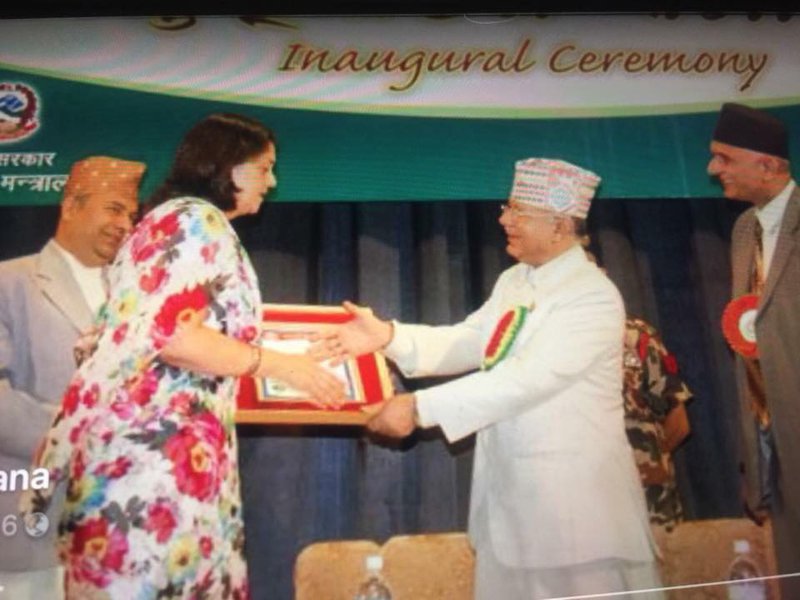 Next day we had weeding of wild weed as an awareness program which was organized at Kasara where I found the sensitivity felt by then Prime Minister Nepal on the need to preserve the environment and jungle of the country as a priority.

I knew Prime Minister Madhav Kumar Nepal loved trees and jungle not less than any environmental activist. I was not wrong. I am thrilled reading the news just now that former prime minister Nepal has raised his voice in the House quoting ‘no need to chop off the 24 lakhs trees in haste without any proper homework: why would we need such a big international airport at the cost of killing 24 lacs trees and wiping out the eco system of Neejgadh Jungle?

Hats off former Prime Minister Nepal, your voice provides us the strength to fight to save the 24 lakhs trees from being chopped off at Neejgadh, the proposed site for the second international airport.

While concluding my long story on why we need to save trees here I would like to strongly protest to stop the chopping off of 24 lacs trees of our prime Charkose Jhadi.

These days I ask myself, do we really need the world’s 4th largest airport at the cost of killing 24 lacs trees and wiping out its entire eco system?

When the mega earthquake shook us and traumatized us, the first thing struck me was the condition of TIA -- has it survived? I felt, at once, the urgency of construction another international airport. I admire the decision to construct the second International Airport as an alternative to the TIA which is a must. But again I repeat, not at the cost of killing my 24 lakhs trees of dense charkose Jhadi. No way.

I have a few queries 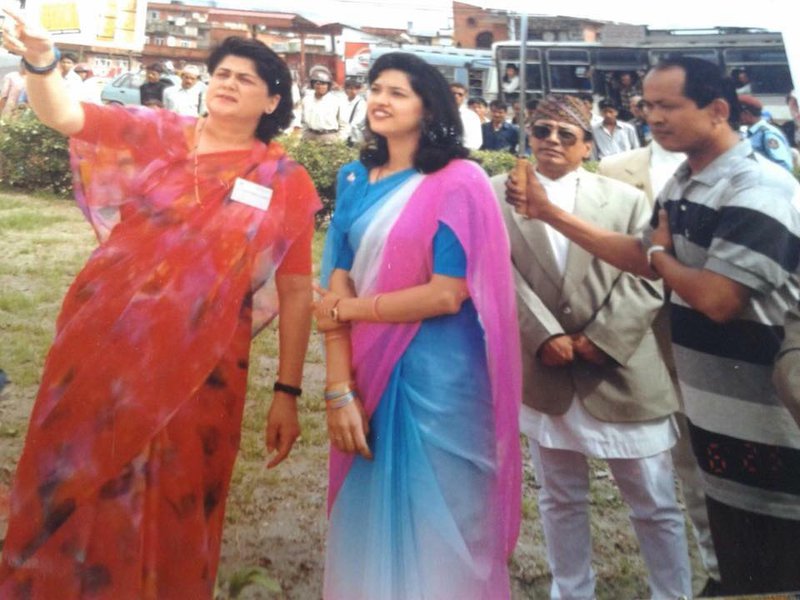 Surprising is that how can this ambitious project be feasible if we are going to kill 24 lakh Trees of 8000 hectare jungles?

To conclude my queries, I would once more strongly protest the bizarre idea of destroying the nature in the name of development, when minimum damage can be considered as a priority.

I humbly request the concerned to look for other options as we all know we need another international Airport but not such a big one at the cost of our 24 lakhs of Trees.

“There is pleasure in pathless woods,

There is rapture on the lonely shore,

There is society, where none intrudes,

by the deep sea, and music in the roar,

I love man the less, but Nature more ‘.

Uttarakhand Glaciers And Recent Disaster: A Lesson To Our Countr By Dr. A.B. Thapa 1 day, 2 hours ago