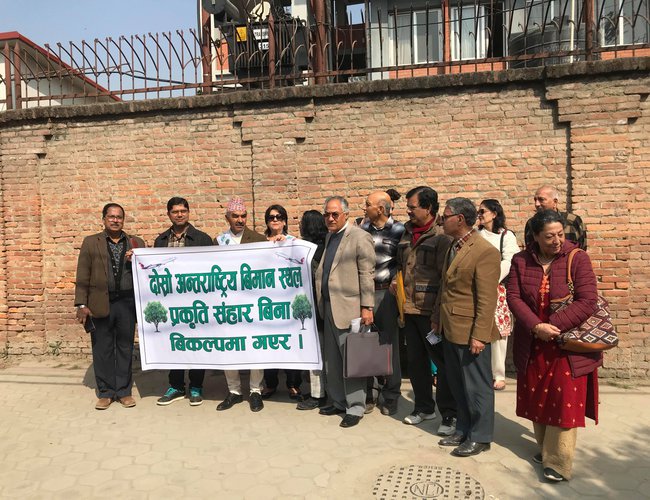 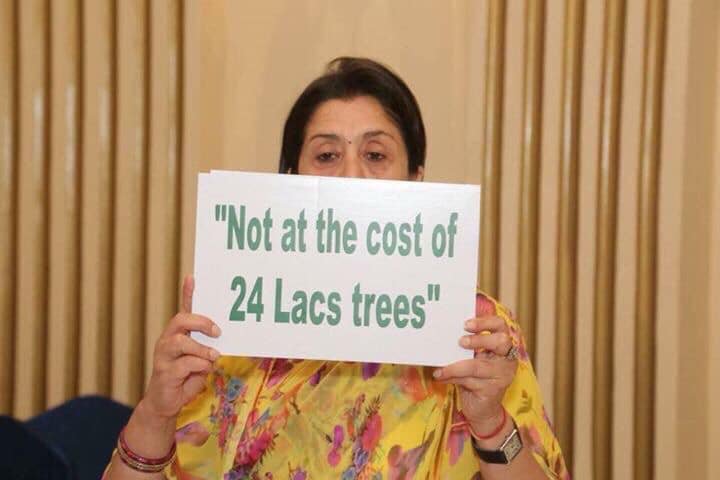 Environmental Impact Assessment Study of Second International Airport project, GEOCE, March 2018 is not acceptable as it lacks extensive studies on ecological damages of such a bio-diversity rich pristine forest of Neejgadh.

When the mega earthquake shook me violently and repeatedly I though of the condition of Tribhuwan International Airport which made me worried and felt an urgency of need to construct another international airport as soon as possible. There is not doubt that it is too late to construct second international airport and upgrade all existing international and national airports of the country. But " not at the cost of 24 lacks (2.4 million trees) which I have been branding the theme of the campaign to save the pristine natural forest of our Char Kose Jhadi for which we all are jointly raising our voices and contributing to save it requesting the concerned ministries to for alternative sites.

Secondly, development and environment can go hand in hand to minimize the damage we can reduce the size of the airport. Why do we need such a huge airport at the cost of 2.4 million trees?

While preserving the natural forest we cannot go with minimum forest damage even chopping of few thousand tress at he middle of dense forest creates irreparable ecological imbalance. It is high time we look for options of alternatives and disqualify the EIA which does not matter intentional standard for funding because it lacks extensive studies done by biodiversity and wildlife experts which are considered as priority in the modern world when world is campaigning to save natural forests to combat climate change issue globally for Mother Earth.

As I repeated EIA does not have meet international standard, rather it would damage the reputation of the country because simply observing the quality of the EIA e.g. EIA consists of copy and paste of hydropower into it? does not it reflect that EIA has been drafted and passed in haste or being irresponsible even to check it before submitting to concerned ministries and even ministries failed to check it before sanctioning to forward the project?

Secondly, while drafting the EIA of such an unique bio-diversity rich forest. This unique virgin forest has announced 52 percent of Shorea Robusta (sal) trees only which seem to be wiped out by chopping off of 2.4 million trees. We are all aware that shorea robusta are rare species of trees which need to be preserved as these trees cannot be produced at nurseries only, nature can produce it. Since long time form the establishment of Deheradun forestry academy research has been carried on to germinate the seeds as saplings of these sal trees without success. said pioneer of community forest Tej B. Mahat ( in my interview to him recently). We can assume the importance of saving virgin forest of Neejgadh which are highly dominated by Shorea Robusta when the world is advocating to preserve the natural forest to combat the climate change issue, when all are concerned about the 60 percent decease of wild life globally studies done by EIA for ecological damages and justification provided on it does not satisfy the donors to provide funding as ecological damaged of this forest cannot replaced by planting one into twenty five trees of 2.4 million trees for which we need around 38000 hector of land and ecological damage are irreparable. We cannot create natural forest of this bio-diversity along with flora and fauna found at this site.

When Nepal being pioneer of preserving the natural forest and contributing to Co2 trade how can EIA allow to chop off 2.4 million trees? which will be totally unacceptable to all.

EIA should have been drafted at possible 8 alternative sites which has been mentioned at EIA too before chopping off 2.4 million trees of Neejgadh forest. Many experts have mentioned Murtiya too with zero natural forest damage. Why not to explore this site?

Why EIA is not acceptable?

EIA report is contradictory as it clearly says importance of the forest (P 5-23). This section discusses the current bio-diversity value of the project area. It says Neejgadh forest project sit is least disturbed part of the forest belt forming a green corridor from Nawalparasi to Bagmati without any gap except rivers and this is one of the largest and richest bio-diversity forest of the terai which is at the verge of being lost with implementation of the Second International Airport Project and the project has a significant bearing on the loss of one of the important national bio-diversity sites a green corridor from the Terai.

All are aware that 500 species of birds are found at this forest but EIA provides list of only 31 species of birds based on a single field survey of 2017. It clearly hints the seriousness of EIA on impact on wild life and birds population found at the region.

EIA itself mentions the Sal (Sorea Robusta) forest is an unbroken chain of great corridor from Nawalparasi to Bagmati but it lacks to threaten species which use this forest as their main home range to be used by them as resourcing of water, minerals, food or shelter too EIA does not reflect such an important issue of effect on wildlife due to obstruction on their green corridor and forest as their home range rather it has concluded the report on the issue just mentioning these wildlife will go back to Parsa National Park once airport construction takes place? as if they can be trained to do so.

EIA mentions few elephants are traced occasionally only where as it is well known to all that this Neejgadh forest is a corridor of Asian elephants. This is one of the main failing point of EIA to hide the facts.

International Civil Aviation Organizations (ICAO) Guidelines does not allow an airport near the national park, how can EIA be passed when this proposed airport site is linked with renowned Parsa National Park where large numbers of tigers been found and we are boasting to be pioneer of on raising the number of tigers globally.

Being an environmental activist I can say that this EIA totally ignored such an important part of the preserving the natural forest along with its rich biodiversity and wildlife just mentioning impact in a light manner as if in haste to draft the report without extensive studies through panel of bio-diversity and wildlife experts which is a most hence I say EIA must be disqualified.

Hence, observing all these errors of EIA I demanded disqualify it and go through 8 options mentioned at EIA too as alternatives of try Murtiya (Sarnath Ban Bikas Project) as well where experts have been mentioning the possibility of constructing the International Airport with zero natural damage of forest too. Why do we need world's largest airport at the cost of 24 lack (2.4 million) trees? We can reduce the size of airport and stop dreaming for hub and mega city by occupying the 8000 hector of dense forest of Neejgadh.

Lastly I request to construct second international Airport as soon as possible as we need it urgently as an alternatives.

Excerpts of the statement delivered at a press meet organized last week after handing over petition to Prime Minister, Minister of Culture, Tourism and Civil Aviation and Minister of Forest and Environment.

Churia Tunnel Is First Tunnel Of Nepal
Nov 12, 2019
EIA of GEOCE to Neejgadh International Airport Construction Is Totally Unacceptable"
Dec 26, 2018
An Appeal To The Rt. Honorable President Bidhya Devi Bhandari
Dec 01, 2018
Presence Of My Father At Neejgadh Jungle
Oct 31, 2018
Not At The Cost Of 24-Lakh Trees
Sep 30, 2018

Melamchi Water To Reach Kathmandu On Saturday, Urged Locals To Cautions By Agencies 1 day, 21 hours ago

PPE And Reproductive Health Kits Handed Over To Nepal By NEW SPOTLIGHT ONLINE 2 days, 18 hours ago