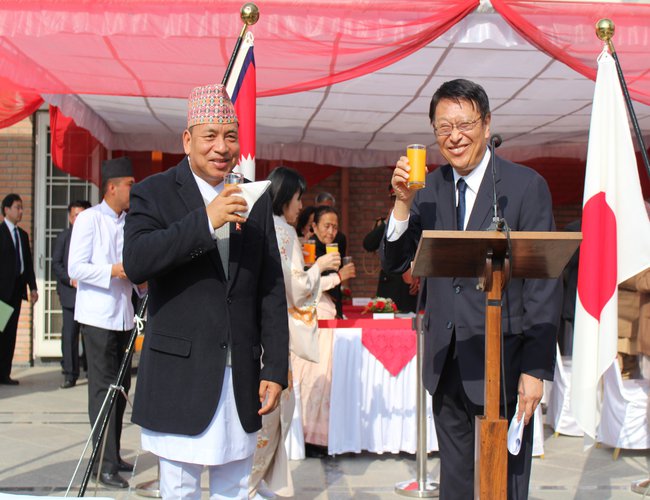 Thank you all for joining us today to celebrate the 85th birthday of His Majesty, the Emperor of Japan, who has graciously reigned for the past 30 years. This year is the last opportunity for us to celebrate our National Day in December. The abdication of His Majesty the Emperor is in April 2019, which will be followed by the enthronement of His Imperial Highness the Crown Prince, in May.

When I was given an audience by their Majesties before my posting to Nepal, I learnt that His and Her Majesty the Emperor and Empress have longstanding personal bonds with Nepal.Their Majesties visited this beautiful country a few times, one occasion was in 1975.It was for the coronation ceremony and colleges between their official schedules. Her Majesty the Empress told me to deliver her message of appreciation to President Bandhari, which I did when I presented my Letter of Credence, for sending five thousands blankets from Nepal to support those who were affected by the Great East Japan Earthquake in 2011.

Six months have passed since I was posted here to Kathmandu as Japanese Ambassador, along with my wife, Eriko. Japan and Nepal have had diplomatic relations since 1956, the people-to-people exchange between our two countries commenced from the late 19th and early 20th centuries. I am sure that one of the memorable high-level exchanges this year was Gyawali, Minister for Foreign Affairs’, visit to Japan in November. At the Japan-Nepal Foreign Ministers’ Meeting in Tokyo, he discussed with Minister Knowhow to strengthen the relationship between the two countries. Furthermore, Gyawali had meetings with Yoshikawa, Minister of Agriculture, Forestry and Fisheries, Japanese parliamentarians, and business people. Japan is one of Nepal’s major development partners and a good friend, we will continue to support Nepal for the vision “Prosperous Nepal, Happy Nepali,”by deepening and widening the relationship between the two countries.

Next year, Japan hosts the Rugby World Cup 2019, the Trophy is now in Kathmandu for the promotion tour and kindly displayed here today, organized by the Nepal Rugby Association. Japan also hosts the Tokyo Olympic and Paralympics Games in 2020. As the International Olympics Organization states, “sport has the power to bring people together, “and we are ready to welcome visitors from over the world, of course, many from Nepal!

Now I would like to introduce the Japanese companies who supported today’s reception: “Kotetsu,”“Marronier,”“Sapporo” and “Danran” for their delicious Japanese food; “Maharajan International” for the Japanese sake, and “Our Farm” for fresh Japanese strawberries cultivated here in Nepal. In addition, a Japanese tea ceremony is also on offer today. As a reception at the Japanese Embassy would not be complete without a true taste of Japan, please enjoy the food prepared by our Embassy chef as well. Some Japanese businesspeople are also here today to share their work and information with you. They are “Kasai Hotel,”“E&T” for water-purifying equipment, “Starlight Express,”“Eiken” and “HITA Heavy Machinery and Recycle.”

Thank you all once again for coming. I would like to propose a toast, wishing a good health of His and Her Majesty the Emperor and Empress of Japan, and a great friendship between Japan and Nepal. I wish you the very best for the festive season and New Year. Kampai!

Author is the ambassador of Japan to Nepal. Excerpts of the statement delivered at Japan’s National Day Celebration.

Masamichi Saigo is the Japanese Ambassador to Nepal.

Japan And Nepal Can Both Contribute To World Peace And Prosperity
Feb 23, 2021
The High-Level Exchanges Between Japan And Nepal Have Been Progressing
Feb 14, 2020
A New Era, “Reiwa”, Commenced In Japan
May 28, 2019
JDS Fellows Will Contribute Greatly To Nepal’s Development
Aug 02, 2018