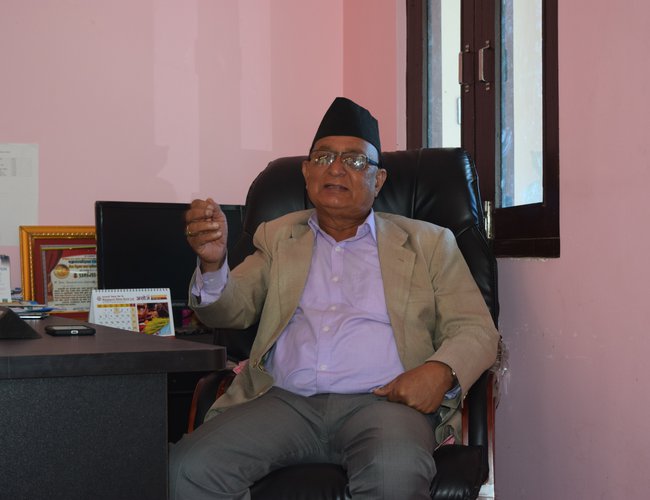 As you were elected a year and half ago and the governments at the national and provincial levels were constituted only a year ago, how do you see the functioning of the three tiers of government?

As the mayor of my municipality, I don’t have any major crisis till now. Given the ambiguity in the constitution and laws, what I can say is that the clashes among the three tiers of government are inevitable. For instance, the constitution has delegated many powers to us, recognizing the local level as an autonomous body at par with the center and provinces in certain areas. The current central government has been making efforts to encroach on our constitutional rights, issuing directives and regulations. Under the constitutional provision, the power of running high schools has been vested upon us and it is at the local level where decisions in the management of the schools, including teachers, are made. However, the center is intervening in this. Similarly, the constitution has entrusted certain financial rights to the local levels, including to levy taxes. However, the center is intervening us here again. Provincial governments also think in a similar way and seek to show they are higher than the local level. If center and provinces do not respect the constitutional provision, then clashes between the three tires are inevitable.

How about the fiscal state of your municipality?

This is a very new municipality with large areas incorporated under it. People have very high expectations from us. People have been demanding more facilities from the municipality. People hold the view that the municipality means cities with all the modern facilities. With virtual non-existence of infrastructure, including electricity, roads, drinking water, sanitation, schools and medical facility, Patan Municipality requires a huge budget. After handing over all the local level institutions to us, the budget requirement has also gone up. However, the budget allocated by center and provincial governments is minimal, the budget is just enough to pay the salaries. Since our municipality is in remote parts of the country, there is a limitation to generate additional resources.

What do you mean by the intervention?

Although the constitution gives us independence and autonomy, the center, through its directives and regulations, is making efforts to limit our role. The Ministry of Federal Affairs and Local Level has already issued a number of guidelines restricting us in our functioning as an autonomous body. We are given judicial power but we don’t have any mechanisms. The local level has the right to draft law and promulgate it but we don’t have any tool to implement them. Many municipalities like ours have municipality in the name plate but their structures are no more different than previous village development committees with a few employees. As per the constitution, we want our own city police and employees to execute our laws and decisions.

How do you see the role of Patan Municipality in local development?

Do you have adequate technicians and other manpower to look at road constructions?

Once we start road construction, we will find technicians. We have been requesting the center and provincial government to send us permanent employees. However, nothing has moved. I know I cannot start construction without technicians. However, I don’t have any other options as there is growing pressure from the people. Since the government declared Patan as a municipality, we are compelled to provide basic urban facilities. How can we raise taxes without infrastructure?

Does Patan Municipality have equipment?

We have just published a tender notice for two excavators and four tippers and few other small tractors. We will use them for the purposes of construction and collection of solid waste. Once we have this equipment at our disposal, we will start the construction and upgrade of connecting roads.

How many laws has your municipality passed?

We have already passed nine acts and published them in the local Rajpatra. The acts are related to local taxes, building codes and punishments. We have also passed annual budgets and other regulations as per the modality received from the center. We have been working under these acts.

How is the provincial government helping your municipality?

The provincial government has already sent us our portion of the budget. Once they pass the act, only then can the situation be clear. According to constitution, it is provincial parliament to pass the law on local level.

What about other sectors like education, health and social sector?

Given the changed political context, how do you see the role of NGOs and INGOs?

Collaboration and coordination between local government and civil society organizations like NGOs and INGOs will also help reduce the duplication in the program implementation.

What is the state of the Haliyas in your municipality?

After learning that INGOs like LWF and Rastriya Mukta Haliya Samaj Mahasangh have invested resources in vegetable farming, Patan Municipality has allocated the budget to other sectors to avoid duplication. Visiting various wards within the municipality, particularly the settlement of Freed Haliya, I find the programs are running in a transparent and coordinated manner with our ward offices. Looking at the performance and modality of LWF-Nepal and Rastriya Mukta Haliya Samaj Mahasangh, the Municipality is ready to work with them in collaborative and coordinated modes.

What is the state of the Haliya?

Announcing that Haliya are free alone is not enough to end the exploitation of Dalits and Haliyas. What is required is a program for their livelihood, education and sanitation. Having worked with their own network at a community level, for such a long time, LWF-Nepal and Rastriya Mukta Haliya Samaj Mahasangh can work more effectively with them than any other agencies.

What do you suggest to make the Haliyas program effective?

Looking at their livelihood and other programs implemented in Patan Municipality, LWF-Nepal and its partner organizations need to focus in the current areas for a few more years till the municipality generates its permanent resources to fund them. I can defend their program as most accountable and transparent. As the largest municipality of Baitadi district, Patan Municipality has an overwhelming population of Haliyas and Dalits who can generate a lot of pressure to allocate the budget in the sector.

As an elected representative, how happy are you in working with NGOs and INGOs?

Only through coordination and collaboration between civil society organizations and elected representatives of local levels can we bring transformation in the life of Haliyas. Given their nature of work and modality of implementation, we don’t have any hesitations to incorporate programs proposed and implemented by LWF-Nepal and Rastriya Mukta Haliya Samaj Mahasangh to uplift the life of Haliyas living in our municipality. At a time when a large portion of the budget of Patan Municipality has been allocated to expand infrastructure like roads, there is a very nominal budget allocated to human and social agendas like Haliya.

US Democracy Is In Danger: Philosopher Susan Neiman By Agencies 5 days, 21 hours ago

The Fourteenth General Convention: An Aspiration Of NC’s Reawakening By Arjun Narasingha KC 1 month, 3 weeks ago

Nepal's Stand Is For Truth To Prevail, Come What May: DPM Pokhrel By NEW SPOTLIGHT ONLINE 5 months, 2 weeks ago

Nepal Is Ready To Face With India, Ultimately Truth Shall Prevail: DPM Pokharel By NEW SPOTLIGHT ONLINE 6 months ago

How Can An Employer Pay Full Salary To Employees Without Income? Senior Advocate Dr. Gandhi Pandit By NEW SPOTLIGHT ONLINE 6 months, 1 week ago