Why Is There Not A Hindu Nation?

In the name of secularism, our leaders have been felling their personal interest and these people have also put the country's integrity and security on a stake. Religion is the way that helps every person formulate his life’s journey successfully. Hinduism was not rejected by the people of Nepal. Credit goes to Girija Prasad Koirala and his team who helped abolish the 240-year-old Hindu monarchy and transforming the impoverished country into a secular republic. 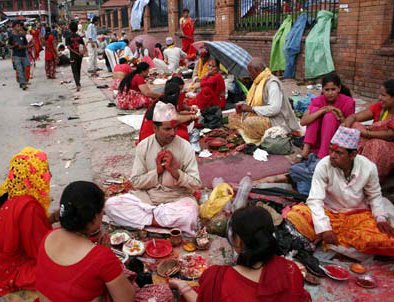 Just before we abolished centuries-old Hindu monarchy and established the republican nation, Nepal used to be the only constitutionally declared Hindu nation in the world. Maoists and their shadow Democrats declared Nepal a secular state by getting rid of the Hindu state tag.

We all are firstly guided by the social norms, values, traditions, and customs, which are based on religion. Religion is the way that helps every person formulate his life’s journey successfully. Religion is the aroma of society. Hinduism in Nepal is not a religion, but a way of life and it is naturally secular.

Let's examine the origins of secularism as an idea. It begins with the mindset of the Ancient Greek philosophers to see the society at that time using metaphysical dualism by distinguishing between worldly and spiritual matters. Assumptions that divide the aspects of life are categorized into two parts, namely spiritual and secular. Matters related to religion are identical with the spiritual matters and the things related to the world are identical with the secular. This is the beginning of the birth of secularism. While in terms of epistemology, secular comes from the Greek word “speculum” which means 'worldly' in the dimension of space and 'now' in the dimension of time. Secularism was a philosophy of atheists for a few decades.

In the name of secularism, our leaders have been felling their personal interest and these people have also put the country's integrity and security on a stake. Religion is the way that helps every person formulate his life’s journey successfully. Hinduism was not rejected by the people of Nepal. Credit goes to Girija Prasad Koirala and his team who helped abolish the 240-year-old Hindu monarchy and transforming the impoverished country into a secular republic. Religion for Nepalese people is something we are proud of and carry it as a part of our identity. We are a victim of Pseudo-secularism. Secularism is considered to be one of the basic vows of leftist ideology but it was introduced with the help of the Nepali Congress.

Nepal is considered to be one of the fastest-growing Christian populations of the world. Based on official data, in 1951 Nepal did not have any Christian population and in 1961 we had 458 Christian missionaries. By 2001, Christian population grew to nearly 102,000. Now we have 1.5% Christian of the total population which accounts for 437, 993 (AIN report). This proportion is expected to rise to 3.8% by 2020. Based on some reports there are more than 3000 churches in Nepal. With this growth ratio, Nepal is on the verge of becoming a Christian nation.

Politicians and bureaucrats have become greedy, cunning, and disillusioned that communal and appeasement politics in the name of pseudo-secularism is the everyday way. The elite, educated, class who had a special hand in this cultural decline of the country do not know that they are insulting Goddess Saraswati by calling themselves intellectuals. The Christian-controlled media is silent.

The Constitution was imposed on the people by force from above and it is not the people's mandate. Let people go to referendum to decide what kind of religious freedom they want. Under the principles of Lord Shree Pashupatinath, Nepal is identified as a Vedic Sanatan Hindu nation, which is in the form of a God-goddess, Shiva Bhoomi, Gyan Bhoomi, and Gorakhbhoomi. Nepal is the land of many temples where millions of Hindus visit each year.

Although the anti-Hindu ideology and the anarchist tendencies of the Left caused Nepal to lose its reputation of being the only Hindu nation in the world and declared Nepal a secular nation, most of the leaders from the political parties receive money from Christian countries, and these members have plotted to declare Nepal a secular nation. The country is going through a very dangerous phase. Religion serves as a foundation for a free society. Religion without culture is no religion and nation without religion is no nation.

Due to political instability, rampant corruption and poverty are everywhere. Christian missionaries are using venerability in our society and convince the vulnerable to follow Christ. These sick, poor and broken families see the hope and start following Jesus Christ. Most of the rural Nepalese are poor and they do not have any means and resources. They cannot even fullfill their basic needs. People without resources trust God more than people with money. These people are the easiest to manipulate. Poor people often believe that God helps and protects them. It is nothing but economic seduction of the helpless people.

Most of our leaders forget that Hinduism is the foundation of human civilization. There will not be the basis for the existence of Nepal without the Hindu religion. Over 81% of Nepal's 28 million people are Hindus and they were not asked what kind of religious freedom they want. People of Nepal were forced into secularism even as 81 % of Hindu people are not ready to embrace secularism easily.

Secularism is an insult to the 81% of the population, that is Hindu. Secularism is such a disease that will only destroy this country. The most special feature of this disease is that the person who suffers from it feels that he is healthy and the rest of the people are sick.

There are 17 countries that enjoy the form of Christianity as a special status. Around 24 Islamic countries, and few as Buddhist nations. The sad reality is, Hinduism is the world's oldest living religion on earth and does not have a nation of its own. A million dollar question is -- why is there not a single Hindu nation?

PM Deuba Received A Telephone Call from US Secretary Of State By NEW SPOTLIGHT ONLINE 3 days, 9 hours ago