In the first election held under it in 1991 as well as in the Mahasamiti meeting in Kalbalgudi, fratricidal warfare broke out between the top leadership from which the Kangress has never really recovered. 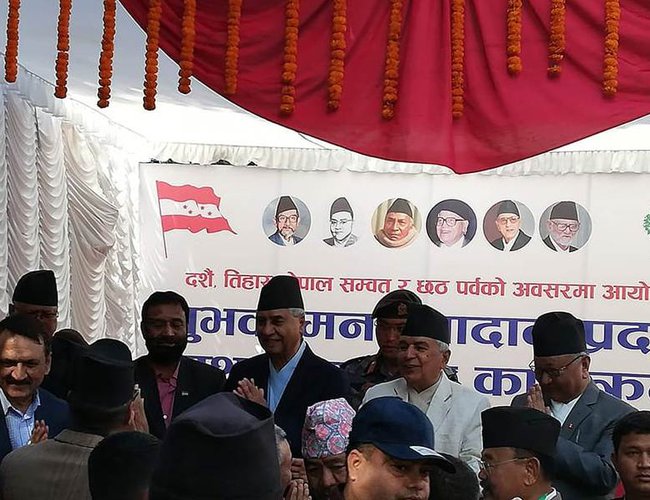 If the title reminds you of that old proverb “flogging a dead horse”, I cannot blame you for your sense of deja vu. It was flogged two years ago with the hope that the more liberal wing of Nepali politics would reform and revive (https://www.spotlightnepal.com/2016/03/17/can-kangress-reclaim-its-soul/); and again a year back that same sense of altruism led to another effort (https://www.spotlightnepal.com/2018/01/21/angst-kangressis/) in these pages. The existential crisis facing the Kangress is only getting worse; but the party oligarchs are more concerned about who gets to sleep in the master bedroom even while their house is on fire. And all honest soul-searching efforts by their younger lot were thwarted by the party bosses at their last Mahasamiti meeting in December.

Alas, hope howsoever forlorn never dies. So here is one more attempt to flog the dying horse, provoked by the angst-filled bemoaning of a (relatively) young Kangressi intellectual, Puranjan Acharya. In an op-ed piece in Nagarik Daily last Tuesday, he compares politics to the game of cricket, a British colonial legacy which has recently gained popularity in never-colonized Nepal. A catalogue of “missed catches” shows where Kangress in opposition has failed to gain political capital from the misdeeds of the ruling communist party and thus defend the interests of the Nepali voters. He lists the Kangressi failures to putting pressure on ending the transport cartel Syndicate, to solving the Nirmala rape and murder case that happened in the Kangress president Deuba’s political backyard, to holding the rulers accountable in the massive gold smuggling scandal, to exposingthe Holy Wine scandal, to properly questioningthe BIMSTEC military alliance diplomatic fiasco, and most seriously to challengingthe nominations to constitutional bodies which cannot be done (as per previous Supreme Court ruling) without the participation of the leader of the opposition. His conclusion is that these serious political lapses have happened because of weak and ineffective leadership that “misses all the cricket catches”. He thinks the party supremoes are riding leisurely on slow elephants when what is needed are young riders on fast horses.

While there is much substance to this analysis, it does not address the more serious root causes: while a younger leadership at the helm will definitely be more agile and provide better dynamism to a party that is near ossified, that leadership too will be shackled by a host of past sins that has nearly destroyed the very ideological foundations of the Kangress party. These sins began to be committed early, at the very point where the crowning political achievement of the Nepali Kangress was the establishment of the democratic framework of a multi-party polity to replace the Panchayat, the 1990 constitution. Giving it up in 2006 meant in reality the Kangress giving up on its own “glorious” political history.

In the first election held under it in 1991 as well as in the Mahasamiti meeting in Kalbalgudi, fratricidal warfare broke out between the top leadership from which the Kangress has never really recovered. As the continuing fights between the Deuba, Poudel and Koirala factions currently indicate, the party is far from unified and functions more as a ‘pati’ (Nepali wayside caravanserai) of disparate views and members that prevents it from speaking with one voice on issues of common public concern. Yes, democracy means diversity of views, and yes a democratic party is more noisy and messy than authoritarian and totalitarian ones; but when a party is unable to come to a consensus and does not even follow established procedures to bring about that consensus, it fails to be an inspiring voice of alternative oppositional politics, and an average voter can be forgiven for losing all hope.

During the 1990s, both the Kangress and the EhMaLe were responsible for debasing multiparty democracy, the Kangress more than the communists since the latter was still suffering from totalitarian Stalinist hangover and had only given “critical” support to the constitution that they too (with the Maoist Nirmal Lama, lest we forget) had been party to drafting. The first sins by the Kangress were to try and circumvent Article 126 of the constitution on the Tanakpur agreement with India and not presenting it to the parliament. When forced by the Supreme Court interpretation that it was a treaty and not just an agreement, it failed to do so and solve the issue in a civilized manner in the House and not from the streets.

The Supreme Court too was at fault: while ruling that it was a treaty that needed to be placed before parliament, it failed to give a judgement interpreting Article 126 – whether the matter was “grave, long-term and serious” requiring a two-thirds majority or whether it was not and required only a simple majority, and, worse, declaring that the parliament had to decide and the court would then subsequently rule whether that was constitutional or not. The matter was not helped when parties chose Speakers of parliament that refused to resign from their respective parties and maintain neutrality.These actions debased both the government which was totally distracted from delivering development and the parliament, which the Maoists then began their attack on claiming it was a butcher’s shop displaying a goat’s head and selling dog meat.

The other principled failure of the Kangressis was not allowing the EhMaLeprime ministertodissolve the parliament and seek a fresh public mandate in 1994, in which it was aided and abetted by the Bishwanath Supreme Court. It destroyed the ability of a prime minister to discipline the House with that threat, and led to utterly irresponsible sets of musical chair governments with no ideological and policy cohesion, engaged only in corruptions such as the infamous Pajero, Dhamija, Lauda, Arun-3 and other scandals that made politics not public service but something synonymous with corruption. It is a legacy that has lives right till today and fails to inspire hope in the population at large.

The infighting among senior party oligarchs – primarily between Deuba and his erstwhile mentor Girija Koirala, with KP Bhattarai and Ganesh Man Singh having already been side-lined earlier by the latter –led to a “race to the bottom” in Kangressi politics sacrificing principles, ideology and sensible political practices in favour of immediate opportunism. Even while a Kangress majority government led by Deuba was finally taking action against a Noida-backed proxy war insurgency, the party president Girija was secretly conducting alliance talks with Maoists in Delhi. When Girija attempted to unseat Deuba (as he had unseated Bhattarai previously), the latter dissolved the parliament, a move that was welcomed by all parties except the Girijangressis. Rather than going to the people to seek a fresh mandate, Kangressis insisted on resurrecting a dead parliament whose people-given 5-year mandate had long expired.

And the activities of that resurrected parliament, aided and abetted by the aspirations of the Kangress party chief to become the first president of Nepal, led to the Nepali Kangress into giving up its core ideology and political beliefs and becoming the political porters of the Maoist (and Mughlani) agenda of republicanism, secularism and federalism. It got worse during the Indian blockade of Nepal following the 2015 earthquake and the promulgation of the new constitution: so frightened was the Kangress of Modi that it could not even utter the ‘b’-word! This kowtowing to the Mughlani agenda led to the loss of the Tarai (considered a Kangress bastion) to other Tarai-based parties and the communists. Today it is losing the youth of Nepal who have either given up on the country and moved abroad for earning a living or, if within the country, have shown being attracted to other newer parties.

It is said that sustainable political systems arise when, after winning a battle, victors show magnanimity to the vanquished. It happened with victorious US allies being magnanimous with Germany and Japan that led to almost seventy years of Pax Americana. Kangress instead showed absolute meanness during and after the political changes of 2006. Some examples of which are how it destroyed the King Mahendra Trust for Nature Conservation (KMTNC), how it got rid of the National Unity Day on the birthday of the unifier of Nepal, King Prithvi Narayan Shah, and how it also got rid of Falgun 7 (February 18) as Democracy Day.

If Girija’s daughter could run an NGO in her mother’s name, if Deuba’s wife could do so too (with both raising money for those NGOs are prime ministers!) what was wrong in a genuine democracy to allow Gyanendra to run a nature conservation NGO in his father’s name if he was not to do politics? Getting rid of Unity and Democracy Days not only destroyed the ideological beliefs that the Kangress was founded in but also the very history of the Nepali Kangress. It thus forced the people in the last elections to say if one had to vote, why vote for the porter and not the real communist sahuji? Mr Puranjan Acharya, it is going to take a lot more political soul-searching and ideological cleansing for Kangress to rejuvenate itself than just a change of driver from the current crop of oldies that have ruled the roost since 1990 for over a quarter of a century to just someone younger.

Nepal And The EU Share 20 Years History Of Partnership On Education By Jutta Urpilainen 8 hours, 27 minutes ago

Be Works By Hemang Dixit 9 hours, 28 minutes ago