Choosing the serene and lush green Anantara Riverside Bangkok Resort on the west bank of the Chao Phraya with enchanting outdoor pool and sumptuous breakfast enabled us to enjoy the river and see many landmarks and markets by using tourist boats. 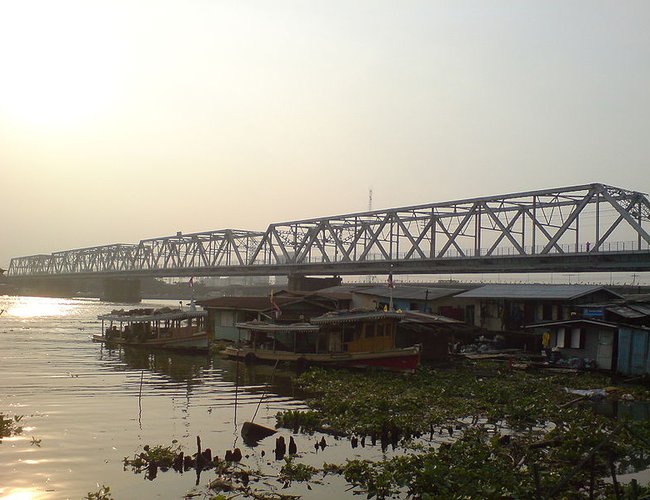 Thailand’s capital, Bangkok in the Chao Phraya River delta with over 8 million people, is well known for its “ornate shrines and vibrant street life”. The Chao Phraya River and its network of canals that flows by or past the opulent Grand Palace, sacred Emerald Buddha, iconic Wat Arun and many markets coils through the city. While there is so much to explore in this metropolitan city, one of the efficient and economic ways to do so is to live by the Chao Phraya Riverside and visit its landmarks by boats. Choosing the serene and lush green Anantara Riverside Bangkok Resort on the west bank of the Chao Phraya with enchanting outdoor pool and sumptuous breakfast enabled us to enjoy the river and see many landmarks and markets by using tourist boats.

Whether the Bagmati or the Ganges or the Nile, Rivers around the world have shaped villages, forests, transportation, cities and civilizations in their watersheds and along their banks over millenniums. The Chao Phraya River, called the “River of Kings” by the Thai English Media, is no exception. The famous Chao Phraya that originates in the Central Plains of Thailand journeys over 372 kilometers irrigating rice paddies, nurturing numerous settlements and shaping life in cosmopolitan Bangkok before empting into the Gulf of Thailand 25 kilometers away. While it covers 35 percent of the country’s land mass, drains over 157,924 square kilometers of its watershed, numerous markets and historic attractions of Bangkok are dotted along its banks.

The River also constitutes a major transportation artery for a network of river buses, cross-river ferries, and water taxis. More than 15 boat lines that operate on the river and its canals are used by locals on a daily basis for work, marketing and pleasure. Numerous major bridges that cross the Chao Phraya in Bangkok, including the Rama VI railroad bridge and the Mega Bridge on the Industrial Ring Road, connect key markets, malls and residential areas of the Thai capital. The Chao Phraya basin is home to around 280 species of fish, including about 30 endemics. Due to pollution, dams and drainage, extensive habitat destruction has been noticed in lower Chao Phraya basin, particularly in Bangkok stretch. Nutrient pollution, which causes algae to grow faster harming water quality, aquatic life and marine habitat have been identified as a serious problem.

Nevertheless, like all urban rivers, the history of the Chao Phraya is intertwined with the Bangkok city it flows through. Numerous canals were dug off the main river for better navigation and farming earning Bangkok the title of the 'Venice of the East'. While a network of roads, bridges and BTS may be used to explore Bangkok, one of the pleasant ways of seeing its many landmarks, markets and malls is to stay at the Riverside and use the Hop-on Hop-off Boat Service.

With the one-day “Hop-on-Hop-Off” Chao Phraya River Pass bought from the Bangkok Tourist Boat Service at Thai Bhat 180 (US$ 5.5) one can undertake a sightseeing excursion with unlimited rides between the Sathom’s Central Pier unto the Phra Arthit Pier. Visitors may “Hop-on-Hop-Off” at any of the 8 piers between 9 am to 530pm that virtually enables access to almost all the key Bangkok attractions, including the Grand Palace, the Wat Arun and the China Town. The Chao Phraya Tourist Boat Travel Guide provided with the boat pass was valuable as it advises on which pier to get off or how to reach a particular place of interest.

The Wat Arun or Temple of Dawn reachable through the Wat Arun Pier was among the most attractive monuments located at the Chao Phraya River bank. The temple derives its name from “the Hindu god Aruna, often personified as the radiations of the rising sun”. Its unique Khmer-style design is impressive. Many colorful and attractive monasteries and small temples are scattered within the big complex. The 76 meters high central pagoda enables to undertake a panoramic view of its surroundings, including the winding Chao Phraya and the Grand Palace. Decorated by seashells & Chinese porcelain pieces depicting demons & monkeys the tower is obviously attractive. The Wat Kalayanamit with an enormous seated golden Buddha right across Wat Arun may excite any temple enthusiast.

For 150 years the home of Thai Kings and the Royal Court, the Grand Palace complex built in 1782, is a pleasure not to miss. It displays magnificent “opulence that serves as the religious, ritual, and spiritual center of the country”. Reachable through the Maharaja Pier, the complex has artistic temples, attractive buildings and lush green open space in front. The major attraction as one enters is the Temple of the Emerald Buddha (Phra Keaw Morakot). It is big, colorful and architecturally impressive residence of “Thailand’s most sacred Buddhist sculpture” carved from a single piece of flawless green jade. Located behind the Grand Palace, the Wat Pho with a 15 meter tall and 46 meter-long reclining Buddha can charm any sightseer. The Bangkok National Museum with many interesting Thai artifacts is close by for students of history.

The Lhong Pier is the gate way to Chinatown (Yaowarat) and adjacent Charoenkrung Roads with gold market, street food, spices, and many thriving business. A travel guide stresses, “Chinatown is an experience not to miss”. At day time, hordes of shoppers descend here to sale daily staples, trade gold, or to visit Chinese temples while at night crowd flocks to explore delightful right in front of me by a footpath vendor. Having reached Chinatown after heavy lunch and no great desire for shopping, I was contented with a bird’s-eye-view of the town and a big glass of fresh orange juice fetched from a vendor off the footpath. The Little India in Bangkok (Phahurat Market) was a short walk away from the Chinatown with Bangkok’s largest Indian community, a prominent golden-domed Sikh temple, delicious curry houses and textile shops.

The Khao San Road, a backpackers’ haven, was reached through Phra Arthit Pier. Pennywise tourists were loitering around and the road was lined with guesthouses, restaurants, bars, cafes and tee-shirt shops. My quick afternoon stopover on a motorbike taxi concluded with a bowel of hot Thai soup and Singha beer in a cozy street eatery. According to a tourist “this place was just madness” at night each joint trying to be louder and so crowded even to take 2 steps without someone dragging you to a “lady-boy show”. Interestingly, this was just a dull “milled rice market” 150 years ago.

Near central pier Sathom, the River City Bangkok with high-end shopping mall, the Portuguese-built cream colored Holy Rosary Church and the classic European-style Siam Commercial Bank building were appealing. The Asiatique, a former Danish Dock, with 1500 shops, 40 restaurants, street food, bars and the tallest Ferris wheel was delightful to many, particularly at night. The biggest wholesale flower market in Thailand, Pakklong Taladd, with panoramic view of Wat Arun was delightful. The 3 day riverside hang around with periodic trips to central Bangkok to taste street food, hop malls and try top rated seafood was worth the time and money. The night river cruise in classic boats with Thai and multicultural cuisines with well lit buildings, businesses, bridges and cultural landmarks, including Wat Arun, on the banks of the Chao Phraya can be truly enchanting. But the “Hop-on-Hop-off” boat trip stands out as an amazing experience.

Nepal Receives 285,363 Tourists In Seven Months By Agencies 2 months ago