According to Ramayan, Hanuman had to enter Patal Lok to rescue Rama and Lakshmana as Ahiravan had tricked them to go there to help Ravan win the war against Ram. Ahiravana was hidden in Patal in five lamps placed in 5 directions and could be killed only by extinguishing all the lamps at once which Hanuma accomplished by taking the Panchamukha form. 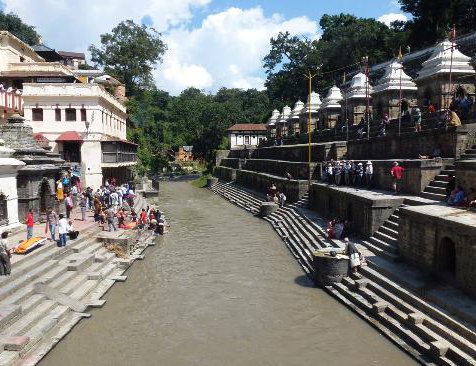 The Bagmati River that begins at Bagdwar 15 kilometers northeast of Kathmandu flows 10 kilometers through rice fields and villages shaping numerous historical, cultural, religious and urban landmarks of Kathmandu Valley before exiting through the Chovar gorge. Continuing downwards through the Southern alluvial Terai plains of Nepal it merges into the mighty Ganges in India. In its tumultus journey of 597 km it irrigates agriculture, provides drinking water, supports industries and carries sewerage shaping civilization. Its banks, Ghats and confluences with many religious and spiritual sites are used for festivities, meditation, religious rites and salvation. The Bagmati is holy to both the Hindus and the Buddhists in Nepal, India and across the continents. Its source gets the name “Baghdwar” or Tiger Gate and river the “Bagmati” as it originates high in the Shivapuri Hills where three headwater streams converge shaped like a tiger’s mouth. Kathmandu Valley’s rivers and streams such as Vishnumati (Keswati), Hanumante, Manohara, Dhobikhola (Rudramati), Godavari, Tukucha (Icchumati), Nakkhu (Pravavati), Balkhu (Ratnavati) all join Bagmati at some point.

Settlements in the bowl-shaped Kathmandu Valley situated at an altitude of about 4600 feet above sea level are believed to have started around 723 BCE. The Licchivi (400-750 CE) and Malla (1201-1769 CE) dynasties were instrumental in developing urban centers, temples, culture and civilization of Kathmandu Valley around the Bagmati and its tributaries. Local communities and the rulers that followed continued to strengthen and diversify the Bagmati civilization over the centuries. The river has been utilized for all kinds of religious and cultural activities- cremations, sradha (death commemoration), festivals, mediation and purification of body by taking dips in it. Kathmandu is home to seven world heritage sites: the three Durbar Squares of Kathmandu’s Hanuman Dhoka, Patan and Bhaktapur; the Stupas of Swayambhunath and Boudhanath; and the temples of Pashupati and Changu Narayan.

After rushing through Bagdwar and Sundarijal the first major religious site shaped by the Bagmati is probably “Uttar Ganga”. The Bagmati River flows towards the north and sradha is performed here for parental salvation is thus known as “Uttar Gaya” too. Kanti Bhairav and Panchamukhi or five headed Hanuman temples occupy an important place here. According to Ramayan, Hanuman had to enter Patal Lok to rescue Rama and Lakshmana as Ahiravan had tricked them to go there to help Ravan win the war against Ram. Ahiravana was hidden in Patal in five lamps placed in 5 directions and could be killed only by extinguishing all the lamps at once which Hanuma accomplished by taking the Panchamukha form. The famous Gokarneswar Mahadev temple built in 1582 is part of the enchanting holy cultural stretch that can be reached with a walk of less than 30 minutes along the northern edge of Gokarna forest and parts of old Gokarna village. On the day of "Kushe Aausi” in late August- early September a big crowed throngs Gokarneswar & its Ghat to bathe and make offerings for eternal peace of their living fathers or sradha of the dead ones.

The famous Shakti Peeth or Adi Shakti temple of Guhyeshwari is about 11 kilommeters away. It is now linked with Gokarneswar by new roads on the banks of Bagmati and can be reached in 20 minutes by vehicles, provided one doesn’t get stuck in the heavy traffic heading to Sankhu, Jorpati, Sundarijal and many settlements. Alternatively, an hour long walk along the river, through Kathure or Daudik dada, northern edge of the airport and tilaganga forest gets you to Guhjeshri while enjoying the panaromic beauty of hills and mountains on the northern side of the valley. Guhjeshwari is crowded during Navaratri in Dashain. Tantrics in particular worship her regularly. King Pratap Malla built this temple in the 17th century. A Kalasha (water jar) embellished with silver and gold under four gilded snaked roof resting on a stone water hole with a deep natural spring oozing out water continually represents the deity. The Ghat has one old peepal tree, Narashimbha avatar’s statue, areas for holy dips and sattals.

One can walk about 25 minutes from Guheswari through the long stonesteps up and then down to reach one of the holiest shrines of Hindus all over the world, the Pashupati Temple, by worshiping Gorakhnath, Manakamna and Ram-Sita on the way. The Aryaghat, famous for Hindu cremation and the Brahmanal, where the holy Jal from the Pashupati temple enters Bagmati, are right by. This voyage also offers a healthy exercise for legs, lungs and the heart of Bhaktas. The Gaurighat close by is famous for the statue of Goddess Gauri or Parvati. The unique and famous Kiranteswar Mahadev temple and the Mrigashthali, the playground of lord Shiva hiding in the form of deer, is within 15 minutes walk up the winding stonesteps. Koteswar Mahadev, Pachali Bhairav and the Jalbinayak Ganesh are among the many famous temples on the Bagmati Riverside before it rushes out of Chovar Gorge.

While whole of the Bagmati River is source of livelihood for common folks and salvation for the believers, the confluences- Dovan and Triveni- have particular significance. The venue where two rivers converge is called “Dovan” and where three join is “Triveni”. Shankhamul, where the Bagmati and Manohara converge, and Teku, where the Bagmati and the Bishnumati meet, are two of the major confluences or Dovans in Kathmandu. The river confluences are considered particularly sacred and are also called “Tirthas”. One witnesses the dead being cremated, religious festivities being performed, or body and soul being cleansed through holy dips. The dovans and trivenis have beautiful temples to worship, Ghats to meditate and sattals to spend the last days of life for peaceful death and salvation.

In spite of its importance, the Bagmati is among the most polluted river in Nepal. The river pollution dates back to the regime of late Juddha Shumsher, Rana PM from 1932-45, when the mixing up of sewage into the river started. According to one finding, the Chemical Oxygen Demand (COD) levels in the Bagmati range from 25 in Sundarijal to 454 in Chovar; while the level suitable for sustaining life is around 40 milligrams per liter. Experts stress the immediate issues to be addressed to restore the Bagmati include provision of better sewerage and wastewater treatment and proper solid waste disposal. The squatters and slums cropping up on the river banks must be shifted or better managed. Sand and river mining need to be properly regulated. Appropriate regulations and laws for sustainable urban development must be developed and strictly implemented.

Among others, the High Powered Committee for Integrated Development of the Bagmati Civilisation (HPCIDBC) and 300 weeks old ongoing Bagmati cleanup campaign are engaged in saving Bagmati. Efforts to embank Bagmati, develop greenery and parks on several stretches of the river, particularly 7 kilometers between Gokarna and Sinamangal, is expected to create green public space, traditional park, venue for cultural gatherings and sports activities. Some of the work is going on under the Asian Development Bank funding. Lessons learned and corrective actions taken for the recovery of severely polluted rivers in other countries, including the Boston USA’s Charles River and the European Danube River initiatives may also be helpful to the concerned to utilize. However, all the concerned must remember that there is a lot of work to be done and big challenges to be tackled before the task of restoring Bagmati to its clean status and saving civilization it has shaped over the centuries becomes a reality.