Gyaneshwar temple complex, only few hundred meters north of the Gyaneshwar Chouk, houses the famous Shivalinga, Gyaneshwar Mahadev, also known as Parasnath and the Ananda Bhairav, a fearsome manifestation of Shiva ever ready to help the innocents and scare the tainted 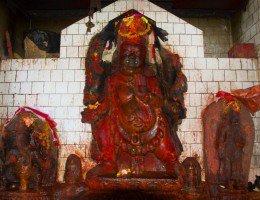 Gyaneshwar, named after ancient Mahadev, is one of central neighborhoods in North East Kathmandu you pass through while on your journey to the UNESCO recognized heritage Pashupatinath temple or to the Tribhuvan International Airport from Durbarmarg via Kamlpokhari. Sano Gaucharan, Mahendra Bhavan School, Charkhal Adda, Police Headquarter, Vijaya Memorial School, Nepal Fine Arts Academy, Balmandir, Nagpokhari, Padmakanya Girls School, City Center Mall, Krishna Pauroti and German Embassy are among the major establishments located there. While the well known International Primary School in Gyaneshwar, where multiple generations of Nepalese learned English medium based early education for over 4 decades closed in 2011, young entrepreneurs have started Karkhana Asia there with the purpose of imparting innovative education with focus on “Make, Break and Innovate” and 4 Cs- critical thinking, communication, collaboration and creativity. Gyaneshwar, Ananda Bhairav, Maitidevi, Naxal Bhagabat and Kalikasthan are among the well known gods and Goddesses protecting the locality for centuries. Mahakabi Laxmi Prasad Devkota and Natya Samrat Bal Krishna Sama lived and worked in the neighborhood. Interesting to note here is also how the famous temples, poets and people living were linked through Gallis or narrow lanes, many of which are now widened and named Margs.

Gyaneshwar temple complex, only few hundred meters north of the Gyaneshwar Chouk, houses the famous Shivalinga, Gyaneshwar Mahadev, also known as Parasnath and the Ananda Bhairav, a fearsome manifestation of Shiva ever ready to help the innocents and scare the tainted. Ganesh, lord of siddhi or success, sits on the right-hand side and Saraswatii, the goddess of learning, flanks the Bhairav from the left. While lord Gyaneshwar, the source of enlightenment, helps its devotees with both knowledge and power, Ananda Bhairav is believed to cure children of diseases and make them calm and studious. Streams of sick and restless children are brought to the idol regularly. The ancient stone tap, Gyan Dhara on the Eastern side, is a perennial source of water and is also used to bathe the sick children before taking them to Bhairav for blessings. The Bhairav considered as a god of fertility also draws many wishing for children. In ancient time, 1 kilo of gold used to spring out daily at the temple and all metals that touched the idol used to turn into gold, according to a legend. Consequently, many men and women still visit the idol wishing for better luck in business, career and livelihood. 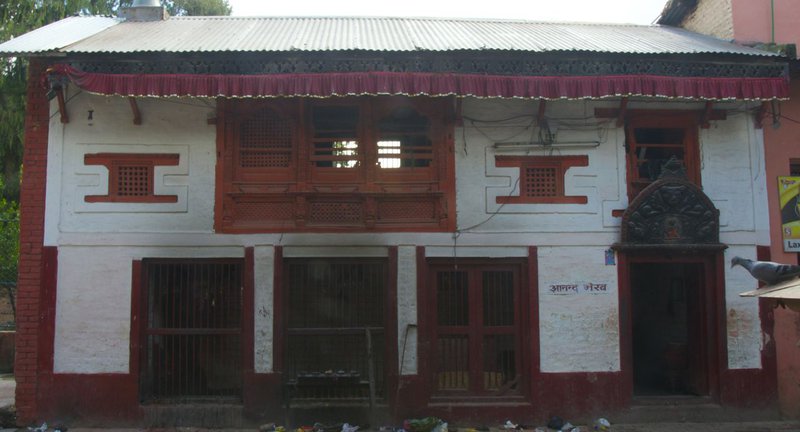 From Gyaneshwar temple, you step down to Gyan Dhara Galli/ Marg to Saraswati Marg and turn right to Shahid Marg at the Martyr’s Memorial School. Then cross the main Gaushala-Kamalpokhari road- now Pashupati Sadak and turn on to Janata Galli/Marga that will get you to the famous Maitidevi Temple less than 1 Km away. Lots of people live on both sides of the Gallis or Margas; including Kishan and Ghumti Gallis, which you may enjoy looking at on the way to Maitidevi- considered the parental home of all goddesses; Maiti meaning “parental home” and Devi being “goddess”. While the current pagoda style temple was built during Rana Prime Minister Chandra Shamsher’s period the first edifice was erected by Lichhavi King Amshu Verma in 628 CE. The two impressive stone lions guarding the main entrance and the old Peepal tree arching over the temple are believed to be from Amshu Verma period. The cremation ground or Shamshan Ghat on SE side is integral part of the temple as the original tantric rituals required priests to burn human skulls during prayer. However, a human face made on a lump of ghee is burned in recent time as skull burning is neither liked nor feasible. Matidevi is also revered as Mahalaxmi and has to be reinstituted inside the sanctum sanctorum annually during Laxmi Puja by the Munikars of Maligaon.

You then hop on Maitidevi-Peepalbot Galli (now Mahakabi Marga-Peepalbot Marga) to Dillibazar Galli (now Radhe Marg) on the Eastern side of Charkhal Adda and cross the main road in Dillibazar to Kalika Marg on the way to Singhadurbar to reach Kalikasthan-Bhagabati Kalika’s abode. It is an open roofed structure, where the temple priests dwell on the ground floor and the Goddess in the temple upstairs arched over by a big Peepal tree

Return from Kalika Marga to Radhe Marga, then cross Kamalpokhari-Gaushala Sadak (now Pashupati Sadak-3) to Sanogaucar Galli (now Devi Marga) that will lead you to Sanogauchar to the right and Naxal Bhagabati to the left both few hundred meters away. The Naxal Bhagwati temple dates back to 1050 of the Kaligat Sambat, when Bikram Kesari was the king and Navasagar his queen. A grand Bhagabati idol presented to the queen by an artist that she liked so much that she installed it as Goddess naming after herself as “Navasagar Bhagwati”. In 665 BS (607 CE), King Shankerdev built the current pagoda style temple for the Bhagabati and initiated a 3 day long chariot procession or jatra on the Preta Chaturdashi known as the “Khat Jatra” now. The current statute of Naxal Bhagwati is believed to have been crafted by the same artisan, who built Palanchowk Bhagwati, Shobha Bhagwati and Nala Bhagwati idols later. Shiva, Ganesh, Hanuman and Sani Statutes also occupy important places in Naxal Bhagwati also called Satya Swaroopini- the ’embodiment of truth’. 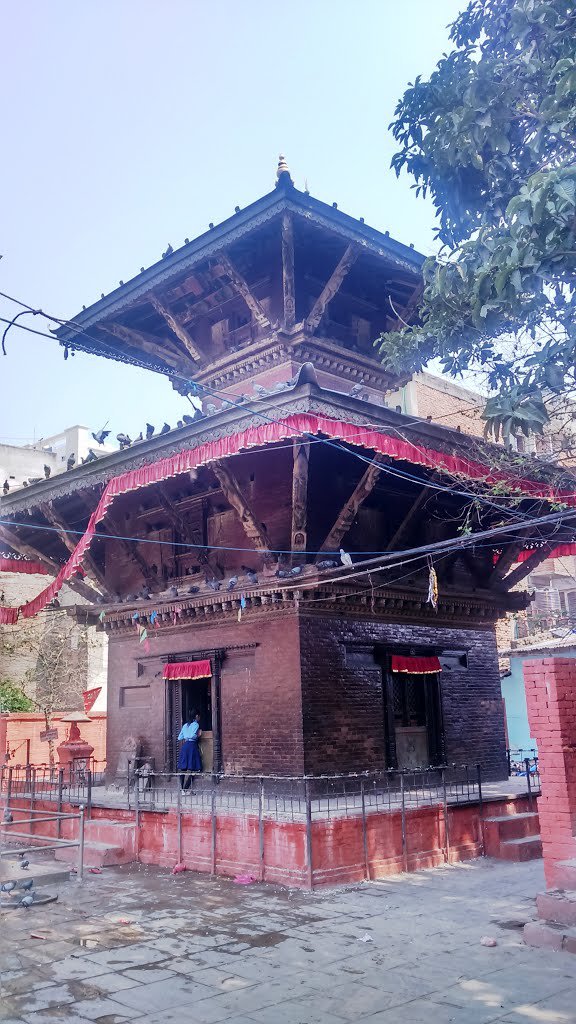 Take a right from the Maitidevi temple then hop left into Siddhi Marg then to Prabhat Galli you reach Mahakabi Devkota’s House at the corner of Prabhat and Kabi Galli. Mahakavi Laxmi Prasad Devkota, a giant of Nepali literature, was born in Thatunati (now Dhobidhara) and lived in Maitidevi. His popular works include, Muna Madan, Sulochana and Sakuntala. Inspired by Newari “Ji Waya La Lachhi Maduni” and departing from the Sanskrit tradition that dominated the Nepali literary writing then, he wrote Muna Madan in “jhyaure bhaka” . It is the most sold book in the history of Nepalese literature. Born on 12 November 1909, Devkota died at Pashupati-Bagmati Ghat on September 14, 1959 after a protracted fight against cancer. His work reflects rebellion against the autocratic Rana rule (1846-1950) and the influence of Wordsworth and Coleridge. He served briefly as Minister of Education under the premiership of K I Singh in 1957.

If you move about 200 meters west of Gyaneshwar chouk on Pashupati Sadak-3 you will locate Gyan Marg on the right where Bala Krishna Sama (8 February 1903 - 20 June 1981) lived and worked all his life. Sama, a dramatist known as “Natya Siromani” and the "Shakespeare" of Nepal, wrote dramas, painted and acted in plays. His rich stack of work includes "Aago Ra Paani", "Chiso Chulho", "Mukunda Indira", "Mutuko Byatha" and "Prahlad". "Kaikai" is his most well-known short story collection.