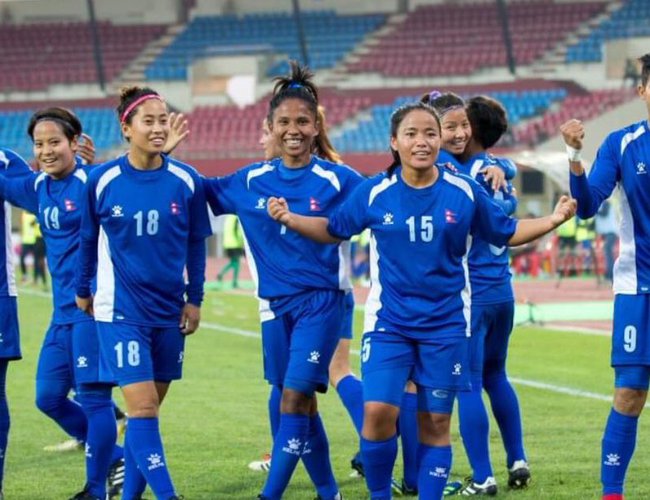 Nepal did their chances of reaching the Hero Gold Cup 2019 final a huge favor as they ran out comfortable 3-0 winners against IR Iran at Kalinga Stadium.

The Nepal women’s team never really looked threatened in the game, and imposed their will on the opposition with quick passes and neat finishes.

Though Iran did have their fair share of chances, especially in the first half, Nepal soaked up the pressure and launched a continued attack to score three goals and kill the game off.

The deadlock was broken in the 41st minute of the game, when Nepal player Anita Basnet managed to unleash a thunderbolt, the volley rifling in the net from an acute angle.

The goal just before the break seemed to give the leaders an added edge, and they approached the second half with similar vigor.

While Iran did hit the crossbar themselves, a goal in the 59th minute from in-form Nepali star Sabitra seemed to end Iranian hopes, as she beat the offside trap, went around the keeper and calmly slotted into an empty net.

That sort of calmness proved to be the difference, and Sabitra got her second of the game late on as Iran tried to push bodies forward. She picked the ball up in her own half, and drove into the opposition area with purpose, before shooting from distance and hitting the back of the net.

This result puts immense pressure on India, who take on Myanmar in the second game of the night knowing they need to win handsomely to better Nepal and reach the final.