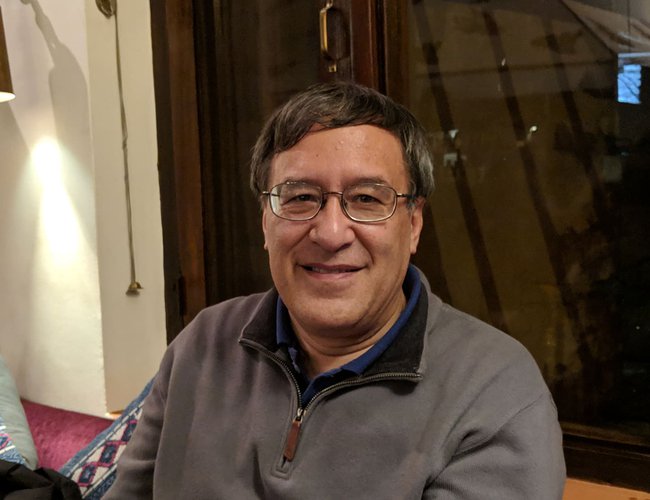 Could you please share ELCA’s priority and engagement in Nepal?

On ELCA’s priority and engagement in Nepal, I would say human capacity building. It is short but extensive as it is building of people’s lives, to have dignity and capacity to themselves. In other words, we support the program, which gives voices to voiceless people like Dalits, marginalized, excluded and poor.

How do you see ELCA working in Nepal responding to earthquake and disaster risk reduction?

The support of ELCA has brought big changes in the livelihood of Haliya, the last form of slavery that existed in Nepal. They are still vulnerable to fall in the trap of slavery without proper livelihood options. How does ELCA view it?

That is very a interesting point. Actually, that was Lutheran World Federation LWF’s program which brought us here to get involved. I was unaware about it till that time. When you consider Haliyas having been in bonded labor for so many generations, in some instances, even in that circumstance, that they are legally freed. The fact that they don't have any opportunity for building own capacity for vocation or even having their own property and shelter. We have helped to build their own capacity on their own way so that that they can learn from themselves where their needs are and to build up the possibilities for themselves particularly for vocation and job or even agriculture and other means of making a living. So it was really an eye opener for many of us outside Nepal to realize that such forms of problem existed. Even ten years after being legally free, nothing was possible because of remoteness of the places and lack of opportunity for employment to them. Actually, it gave us an opportunity to work with them.

ELCA’s support in the first and second phase of reconstruction and livelihood has helped earthquake affected dalits of Dolkha district to recover from the disasters. As poor and discriminated, they are still vulnerable, what plan do you have in future?

Working among the disenfranchised people, who are powerless and in a subsistence society, is nothing new for us. We have been working in India for many years and with tribal people in other countries. In the case of Dolakha, I have travelled myself. As they are away from anything deep in the mountains, valleys and away from others, the people, who have been living in the areas, it is so easy to forget them. Our engagement with them is to give them power to seek something for themselves. Having witnessed some women went to Transformative Education Program (TEP) where they have literacy, training and vocational training and just the empowerment that brings to them. The program helps them to speak for themselves, reach out knowing their own rights as key part of how we want to continue to work with them. We want to enable them to speak for themselves. They need to have capacity to do so and they have many such things now than the before.

Programs like Transformative Education Program (TEP) have supported to generate awareness among Haliya and Dalit women. It is interesting to see most of the elected women joined TEP before elections. Don’t you think there is need to have more programs like TEP?

Obviously, they need more TEP programs. ELCA does not come here to do our own program and we use our local partners like Lutheran World Federation-Nepal who work with the people. But knowing this, TEP model should have been enlightening for us as a simple way to empower people and this model used in Nepal currently among Haliyas and Dalit women needs to expand a little by little in future. I hope this can be a way of empowering the whole community, doing this in small way. It does not cost a lot of money and does not take a lot of time to do this. I have seen the results in Haliya Community. One example was a program I have visited where Haliyas have fields and are cultivating them and earning income from this that is something they never had before. Similarly, others have created the job opportunity for themselves and they are thriving, comparing with the situation that they were in before. After joining TEP, some of voiceless people have found voice and many women had shown courage to contest the elections at local level. This is a big change. We have supported the voiceless people to raise the voices. They thrived in just seven month’s time. If we continue this for a longer time, we can imagine that the change would be in a much broader scale. We want to see expanding this kind of model in the future.

Dalit women are twice discriminated in society and in the Haliya case, they are discriminated at three levels, woman, Dalit and Haliya. TEP is really a game changer for them. This is an opportunity to lift up those people. Haliyas are facing triple exploitation.

How are your experiences in other communities?

There are so many changes following launching programs directed to the communities like Santhal. Even local elected leaders have shown concern to solve local problems locally. This is a big change. We are now empowering dalits, Santhal and landless people but our programs also empower the rural municipal people to empower others. There is a win-win situation for everyone.

How do you see new opportunity to work in the federal governance context in Nepal?

Well. We (ELCA) don't work directly with the government and we stay away from the political things. Despite the fact that many things have been happening with “political repercussions” like now, dalits and women have more space to speak out. This is good for the people. I think the new constitution, the new federal system, in my very limited understanding, is providing a new avenue to have a voice in their own lives and their municipality, province and central government level. It is moving a little by little as it is implemented. To me this is a new era for Nepal and to me it is exciting that the people are emerging with the voices to a new way of governance system.

What will be your strategy to further engage in Nepal?

Our future strategy will be to continue to work with our local partners like Lutheran World Federation, Lutheran Relief and United Mission to Nepal. Similarly, we have also other smaller origination working with us. We will listen to their priority and strategy. ELCA is a company and works with local legal entities. Yes we have our priorities and strategies are to engage and to build the capacity of people everywhere and listen to what local organizations like LWF engage with. We walk with them to empower people and build the people's life fruitful.

Supporting and working with the downtrodden, marginalized and excluded poor people like Dalits, Halitya, Santhal and Mushar, how do you see the support goes to the people from the downtrodden communities?

It is hard to say or explain how we feel about it. If you take on the Christian perspective, when Jesus Christ reached out and touched the life of downtrodden, people like those suffering from leprosy, women, who you can call the Dalits of that time. He touched their life listening and talking with them gives them a voice. Dare to speak these people and dared to touch them was unacceptable. As a follower and disciple of Christ, we support program to reach out to same kind of people like Dalits and down trodden of our time and to give them voices and listen to their voices and provide a kind of healing.