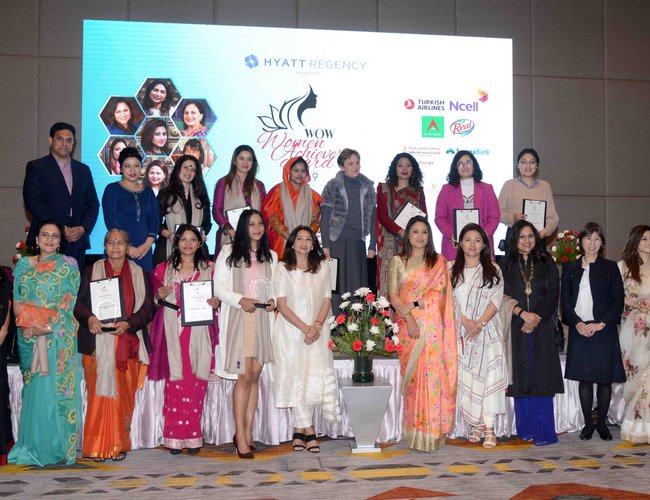 Women from five categories were honored at the event, which saw the participation of a distinguished panel that helped select the honorees. The honors were presented in the following categories: - Entrepreneurship - Arts - Social Activism/Service - Leadership - Inspiring Woman of the Year Awards were presented. 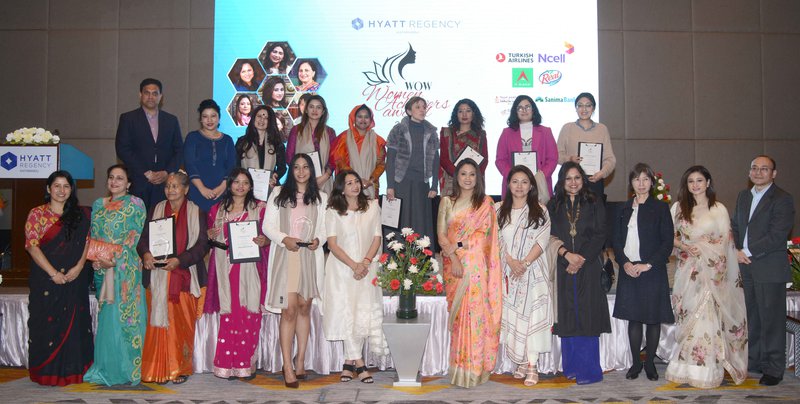 The program was organized in line with the International Women’s Day campaign theme "Think equal, build smart, innovate for change". 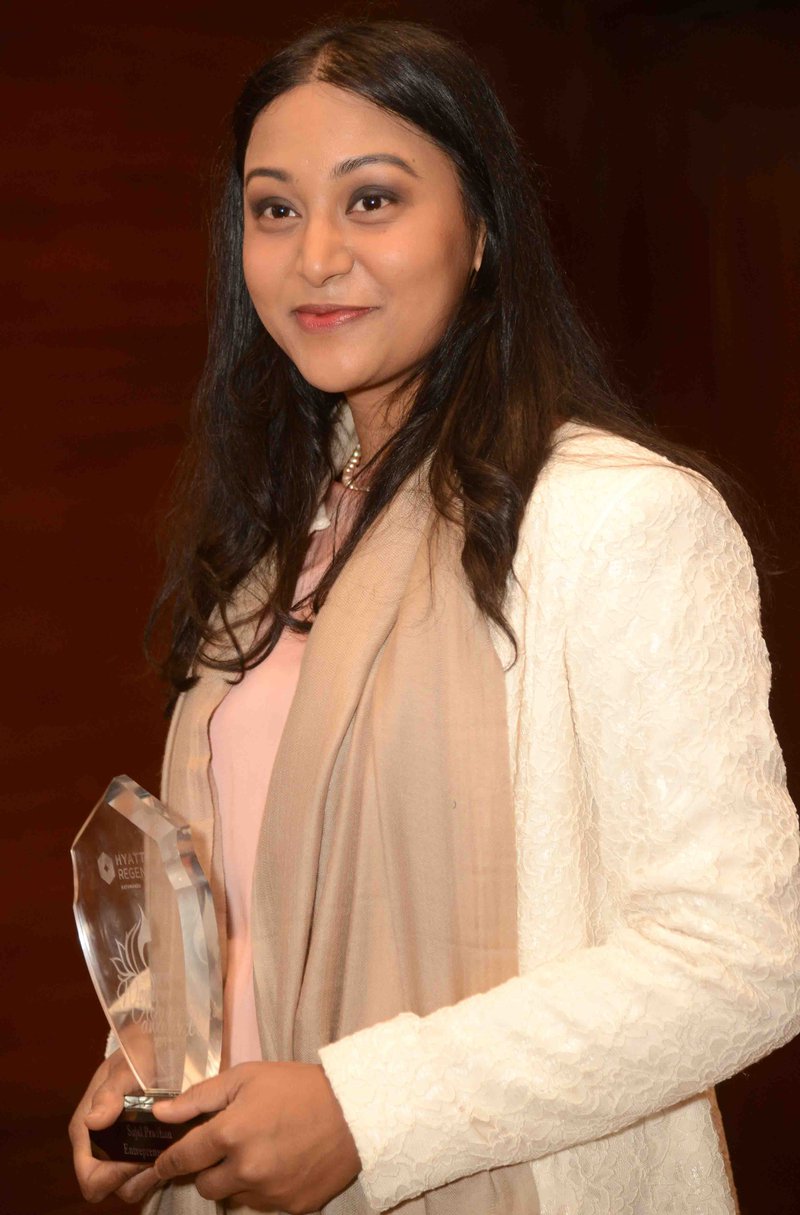 Entrepreneurship Sajal Pradhan is an environmentalist who has been working towards the achievement of sustainability. Since her school days, Sajal has been certain she would eventually end up working for the environment, whether in the corporate field, in governance or in the development sector. Upon graduation, her first job was in the communications and management department of a geospatial data project at the SERVIR-Himalaya GIS Research Centre at the Asian Institute of Technology and Management. In 2015, she went on to cofound Best Paani - an organization that specializes in research and development and the installation of sustainable water systems. She installed water systems for more than 30, 0000 earthquake victims across 20 districts in Nepal. Best Paani works with the vision of creating a world where every person has equitable access to clean water and the use of environmentally sound technologies and 100% locally available resources verified by local and international frameworks for personal, commercial- and industrial-scale systems. She has been providing safe drinking water all over Nepal. Moreover, she is one of the pioneers of sustainable water system installation in the country. 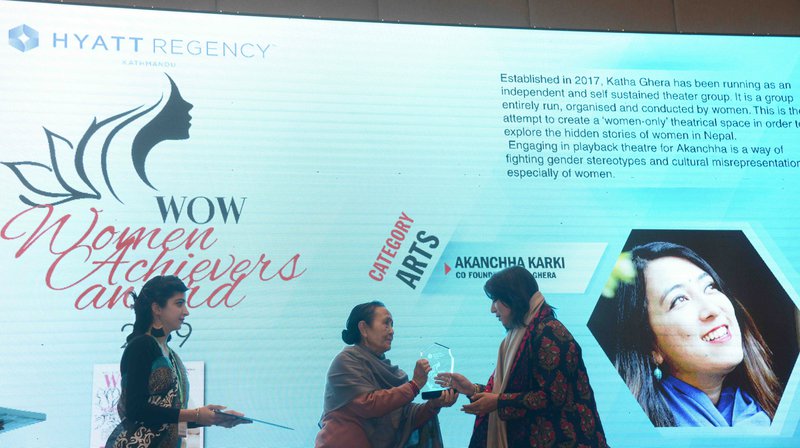 The Arts Akancha Karki is a theatre practitioner, counseling psychologist and a lover of arts and aesthetics. She holds a Master's Degree in Science specializing in Counseling Psychology from Christ University, Bangalore. She founded Katha Ghera, where audiences share their life stories and performers act on the spot. Talented, sensitive, open minded and unafraid are just some words that come to mind while defining Akanchha, who works with the meaningful vision of touching lives. Established in 2017, Katha Ghera has been running as an independent and self-sustained theatre group. It is a group entirely run, organized and conducted by women. This is their attempt to create a ‘women-only’ theatrical space in order to explore the hidden stories of women in Nepal. This group not only aims to produce women storytellers but also intends to bring out those voices that have been suppressed in generations. They love listening to, enacting, and working with stories. Engaging in playback theatre for Akanchha is a way of fighting gender stereotypes and cultural misrepresentations, especially of women.

Sita Adhikari: Leadership after leading various women’s groups for more than a decade, Sita Adhikari decided to start her own business. Since it began operations in 2012, Empower Generation has created over 20 women-led businesses, employing 300 female distribution agents who go from village to village, selling, maintaining and collecting repayments for products. At this time, they have sold almost 60,000 products such as solar-powered mobile phone chargers, flashlights, and rechargeable batteries, providing around 300,000 Nepalis with access to cleaner, safer light and power. Sita, a social activist and mother of two, has always wanted to boost the financial independence of Nepali women by addressing the issue of energy poverty. Empower Generation's business model has received much praise and had won the International Ashden Award for Clean Energy for Women and Girls for its innovative approach to propagate sustainable energy among Nepal's rural poor. 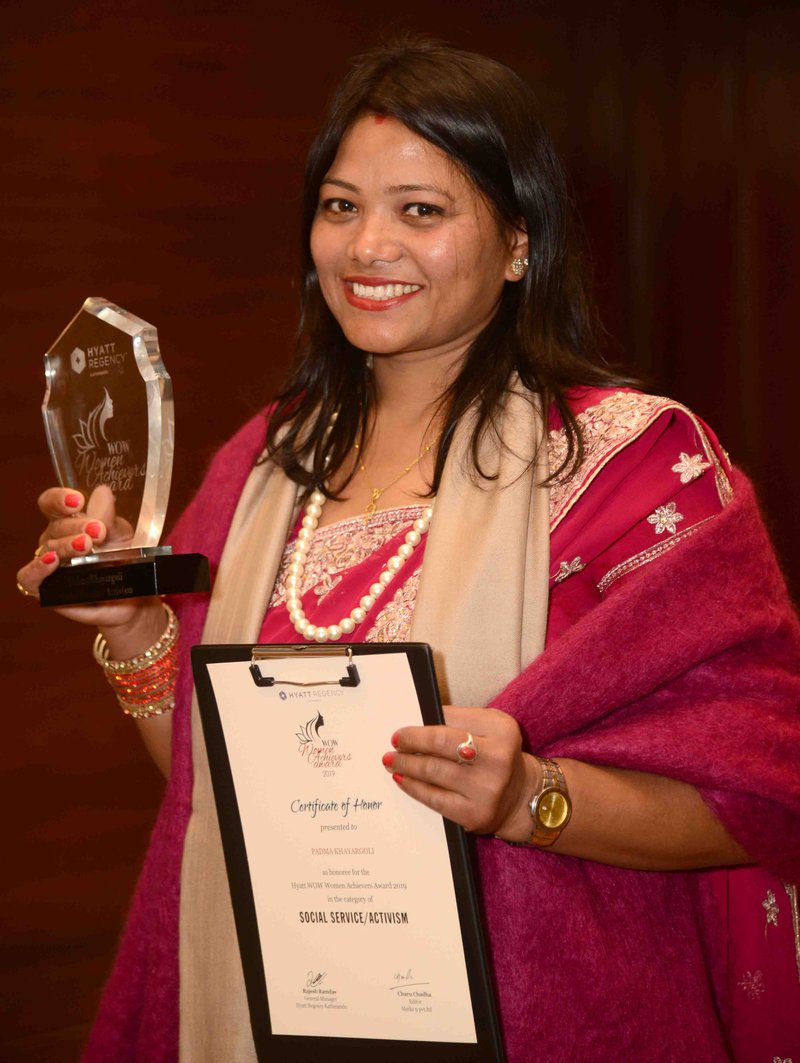 Social Activism/Service a medical doctor at Kathmandu Hospital was sexually molested by his own uncle. She defended herself from being raped. This idea of being one’s own savior was what motivated Padma Khayargoli to continue her journey as a self-defense trainer. Working as Vice-President of Bhaktapur Self-Defense Martial Organization, Padma provides self-defense training in many districts across the country, collaborating with Lion’s Club and Red Cross Society. She conducts and monitors such training programs in 77 districts of the country. She believes self-defense trainings have helped women combat physical and sexual harassment, and have become a necessity for women to stay safe and empowered. 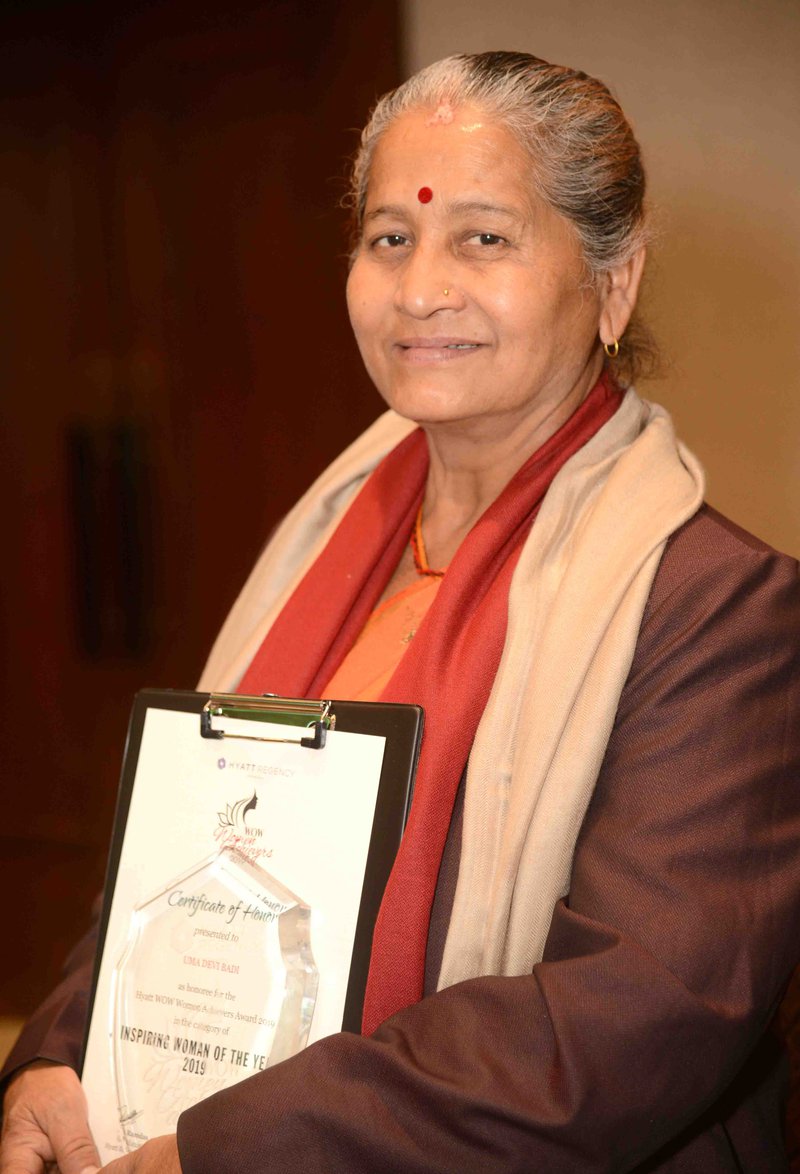 Inspiring Woman of the Year 2018 Fifty-four year old Uma Devi Badi represents Nepali Congress in Sudurpaschim Province and is a notable figure from the Badi community, considered ‘untouchable’ in Nepal. Uma continues the fight to secure rights, opportunities and change the perception of the Badi community and Badi women who work in prostitution (regarded as their traditional occupation). She has also appeared on BBC’s 100 Women of 2018 list. In 2007, around 500 Badi activists from 23 districts had started their journey from their villages to Singha Durbar putting forward a 26-point demand under the leadership of Uma Devi. Despite making numerous pledges and staging peaceful demonstrations, their voices went unheard. On August 22, 2007, Uma Devi led a procession from Maitighar to Singha Durbar. When they reached the gate of the government seat, security personnel closed the gates. Irked Uma Devi climbed up the gate semi-naked and started chanting slogans against the government.

The program started with a musical performance by Indira Lacchimasyu, the first female to play Dhime Bajaa. “This year, we invited Dorje Dolma, author of Yak Girl: Growing Up in the Remote Dolpo Region of Nepal, as a keynote speaker. Dorje was born in one of the most inaccessible places on earth, 13,000 feet high in the mountains bordering Tibet. She was the eldest of 11 children, only six of whom survived the harsh conditions of their lives. When she was 10, her parents took her on a month-long trek to Kathmandu to find help for a serious health condition. There, they encountered Westerners who arranged to bring Dorje to the United States and get her the surgery she needed to save her life. She eventually graduated from the University of Colorado with a degree in Fine Arts and worked as an early childhood teacher,” said a press release issued by

During the event, she shared her hardships and experiences along with her inspiring story of “Women who made a difference to her life” A panel discussion was initiated by moderator Amuda Mishra, and on the panel were Amun Thapa, Founder and CEO of Sasto Deal Pvt. Ltd. Atulya Pandey, Co-founder & COO of Pagevamp and Ishan Raj Onta, Advocate, who expressed their views on the topic “Does traditional Masculinity effect gender equality: Closing the Gap” The event also saw a quartet performance by Kathmandu String Ensemble’s Girls’; with performances by Phoebe Shrestha and Avipsha Neupane on violin , Sabina Maharjan on viola and Iva Maharjan on cello.

Holocaust Education And Remembrance In Nepal By NEW SPOTLIGHT ONLINE 3 hours, 21 minutes ago