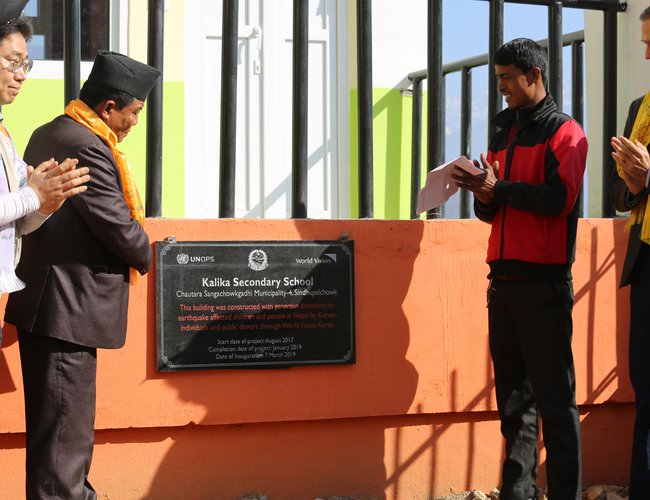 An earthquake-resistant and disabled-friendly school building of Shree Kalika Devi Secondary School in Sindhupalchowk district, constructed with support of World Vision Korea and United Nations Office for Project Services (UNOPS) was inaugurated on 7 March. The construction of the school with eight classrooms which began in August 2017 was completed in Jan 2019 and officially handed over to the community last month.

The inauguration event took place in the presence of representatives from the local government, community, school, World Vision, UNOPS, media and other stakeholders.

Janes Ginting, National Director at World Vision International Nepal said, "We thank the community people for supporting us in the journey of helping build back better so that the most vulnerable children access safe, inclusive and quality education. When children can read, they can better advocate for their rights and help provide for their families."

In response to the April and May 2015 earthquakes, World Vision reached out to over 600,000 people with interventions in the areas of education, child protection, health, livelihoods, water, sanitation and hygiene, cash, shelter and infrastructure in ten of the most affected districts including Sindhupalchowk. World Vision’s partner NGOs successfully completed and phased out its earthquake response programmes in all districts early on in April 2018, three years on from the earthquake. 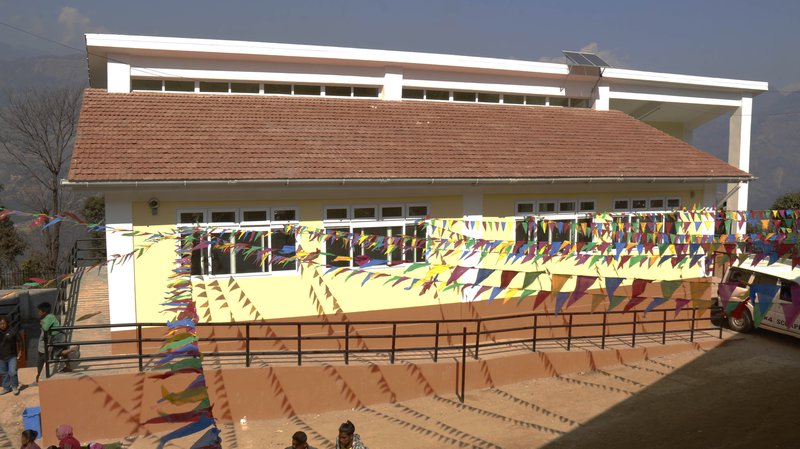 World Vision is a global Christian relief, development and advocacy organisation dedicated to working with children, families and communities to overcome poverty and injustice. World Vision serves all people regardless of religion, race, ethnicity, or gender. World Vision started its long-term development work in Nepal in 2001 working for the well-being of children partnering with communities.

At present, WVIN has long-term development programs in 12 districts and seven provinces of Nepal. After the devastating earthquake struck Nepal in April and May 2015, WVIN responded with immediate relief followed by recovery and rehabilitation efforts in the worst-hit districts of Bhaktapur, Dhading, Dolakha, Gorkha, Kathmandu, Lamjung, Lalitpur, Nuwakot, Sindhuli and Sindhupalchowk working alongside humanitarian stakeholders, government and community partners to benefit more than 600.000 people.

The Embassy Of Germany Organized Two Charter Flights For Repatriation of Tourists By NEW SPOTLIGHT ONLINE 1 day, 2 hours ago