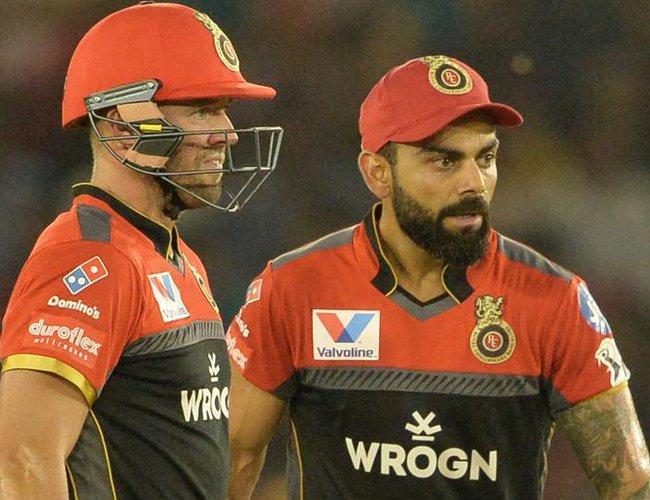 Virat Kohli is the master of chase, but as his Royal Challengers Bangalore lost six games in a row this IPL season ahead of Saturday’s tie against Kings XI Punjab, only two matches had the team going after a target. The inability to put up a good total had also played a huge role in the defeats.

The skipper produced another classy effort, top-scoring with 67 (53b, 8x4) and AB de Villiers finished on 59 not out (38b, 5x4, 2x6) as RCB finally ended the sequence of losses by posting their first win of the season at the PCA stadium.

RCB reached 174/2 with four balls to spare, having restricted Kings XI to 173/4 after winning a good toss and electing to bowl.

Chris Gayle finished unbeaten on 99, after a last-ball boundary, but Punjab could only manage a fighting total that didn’t look like a winning one considering the dew that set in during the second innings and hampered the Punjab spinners’ ability to grip the ball.

Kohli won the toss and elected to field, joking at that time that his team could now relax and play its natural game. He was as good as his word. He began with a flourish, hitting those lovely drives either side off the wicket, and even though Parthiv Patel (19) fell to KXIP skipper Ravichandran Ashwin, Kohli didn’t let go of the golden opportunity.

AB de Villiers, going through a relatively moderate tournament by his standards, played second fiddle but opened up towards the end to steer the side home.

Kings XI lost their second game in a row, after the reverse against Mumbai Indians. Ashwin would be concerned about the inability of his players to show the intensity they had at the start of the season.

Gayle saw off a few deliveries before he got going, hitting fours and sixes at will. KL Rahul too looked in form before being stumped while attempting to step out and hit leg-spinner Yuzvendra Chahal.

His dismissal in the seventh over hit Kings XI as Mayank Agarwal, Sarfaraz Khan and Sam Curran also fell cheaply, leaving it to Gayle to steer the innings.

The Jamaican changed gears, and the run rate dipped sharply. He hit a few lusty blows in the end, but missed the century by a run. Gayle, 39, had been hampered by a bad back, but stayed on to ensure a decent total. But KXIP would be disappointed to miss out by not cashing in on a solid start than the missed landmark.