With the abolition of monarchy in 2008, the special privilege and status given by Nepal's Monarchy to King of Mustang, who agreed to peacefully merge politically with Nepal, also came to an end. However, Upper Mustang's religion, culture and landscape continue to attract people from around the world. Thanks to the continual patronage of former Raja of Mustang Jigme Singhi Palbar Bista and his family members, Buddhist Monks and ancient monastery, Upper Mustang is able to retain its glory of past. With her own love to Mustang's monastery, religion, culture and landscape, Dr. Susanne von der Heide from Himal Asia, has been backing all the efforts of people of Upper Mustang for the preservation and protection of heritage and monastery. 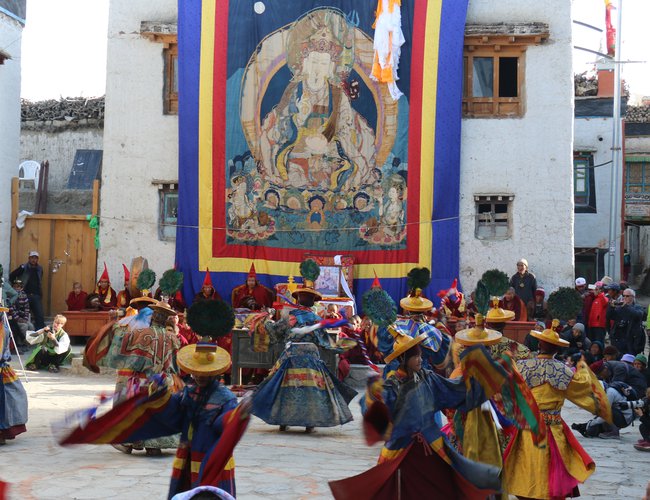 With its unique topography, culture and religion, Upper Mustang has a special place in Nepal and the world. Written in numbers of book and visited by numbers of travelers, it is where, on a few occasions, one can find a great opportunity to see monarchy, monk and monastery together.

Thanks to Dr. Hide's support, a young artist Tsering Phonjo Gurung from Mustang was able to bring all the important parts of Mustang at the Taragaun Museum in Boudha.

Over 75 paintings of artist Gurung, displayed at the exhibition, showed landscape, monastery, religious practices, people and monk together in the form of paintings. 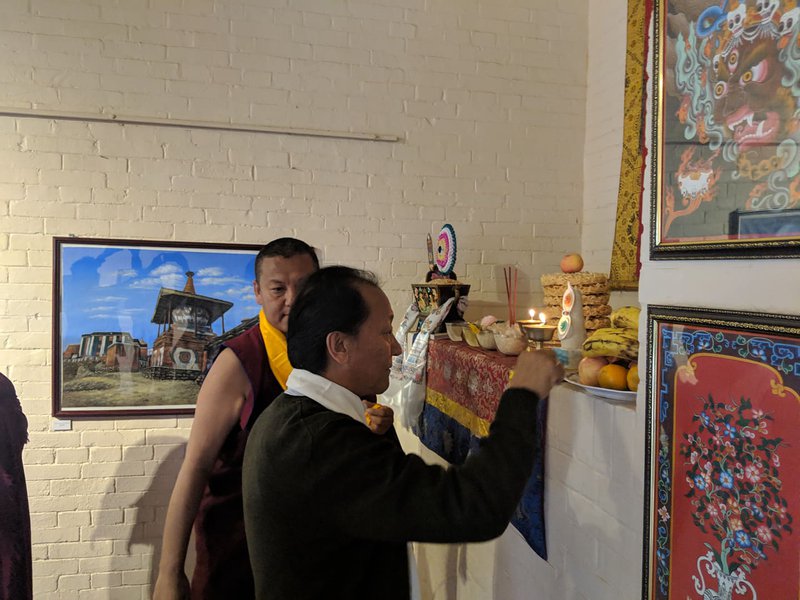 The presence of highly respected 27th Chokye Trichen Rinpoche and former Raja Jigme Singhi Palbar Bista and monks from Mustang and other art lovers demonstrated the importance of the painting exhibition in the context of preserving Mustang's Buddhism, culture and landscape.

Jointly organized by Himal Asia Foundation and The Mustang Shakya Buddhist Association, the exhibition saw artist Tsering Phonjo Gurung displaying 70 paintings, at a range from $150 to $ 300.

Addressing the inaugural program, former King Jigme Singhi Palbar Bista said that the paintings reminded about the landscape and culture of Upper Mustang and exposed these to the outside world. 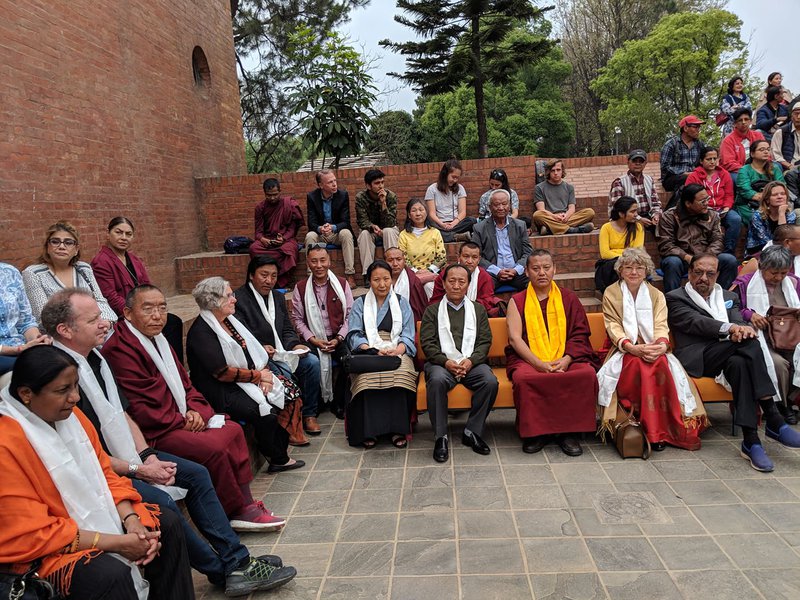 Former King Bista said that paintings displayed at the exhibition represented the ethos of Upper Mustang, including and its surrounding in a beautiful way.

The painter depicted cave, monasteries and various aspects of Tibetan Culture in the surrounding areas of former capital of Mustang Lo-manthang in a clear way.

Having been actively involved in the restoration and preservation of monasteries and Buddhism of High-Himalayas of Nepal Dr. Susanne von der Heide from Himal Asia said that Tsering Phonjo Gurung is a very talented young artist from Upper Mustang. She said that this is the right place to encourage young artist like Gurung to continue his work. Known for her dedication to promote culture and religion of Himalayan region, Dr. Susanne said Gurung is an emerging painter who has already acquired mastery in Tibetan paintings and arts. 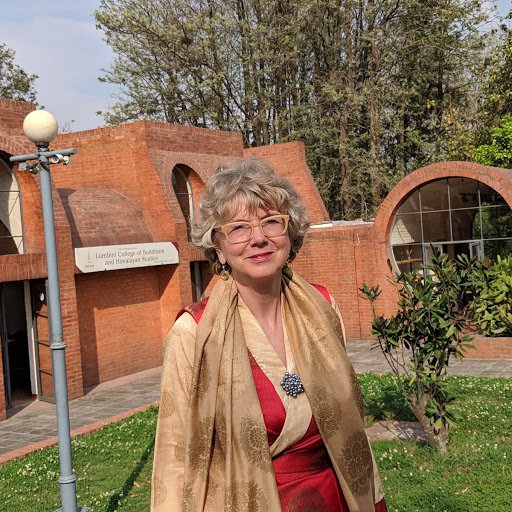 Addressing the program, vice president Ven.Tsering Tashi thanked Dr. Susanne for her contribution and support to preserve and conserve the historical monasteries of Upper Mustang.

Although there are great transformations, artists like Gurung have been working to preserve and protect the culture of Upper Mustang and its surroundings.

Born in 1981 in Chosar, Upper Mustang, Nepal, artist Gurung loved to paint and his talent was discovered. At the age of 16, he began his Thangka painting training with Lhakpa Lama in Chosar. Having worked with wall painting restorer in Luigi Fieni at the Thubchen Gompa, he is not only a skilled Thangka and Landscapes painter but also has worked at different Monasteries all over Nepal to decorate these places with wall paintings. He recently painted Phuntsong Tahi Choeling Gompa in Pokhara.

“Today is really a wonderful day for me because today I got such a wonderful opportunity to present my art in front of you, distinguished individuals. To portray my homeland Mustang through my art has been my long-term dream. To be honest, I must say that my dream has come true it is not because of me myself, but obviously it is due to the kindness of Dr. Susanne and the Mustang Sakya Buddhist Association. I also like to thank respected Gen Tsering Tashi, the vice president of Mustang Sakya Buddhist Association, for his support, guidance and inspiration.”

Attended by residents from Mustang and diplomats based in Kathmandu, the inauguration program was followed by the Garsar Cham Lama Dance, which was performed by the monks of the Choede Monastery from Lo Manthang Mustang.

Located in the Northern part of Nepal, Upper Mustang has been a restricted area for foreigners for years. The landscape and culture of Upper Mustang are similar to that of Tibet, as geographically, it is a part of the Tibetan plateau.

Mustang was only open for visitors after 1992. Before this, visitors were not allowed to enter the forbidden kingdom of Mustang. The area is a perfect destination for a generous scope is offered for visiting Buddhist Monasteries.

For exploring ancient Buddhist monasteries, Cave and Tibetan influence culture, life style of people and beautiful landscape, Mustang is the best place. In his paintings, Artist Gurung grasps all these important aspects of life of Upper Mustang. 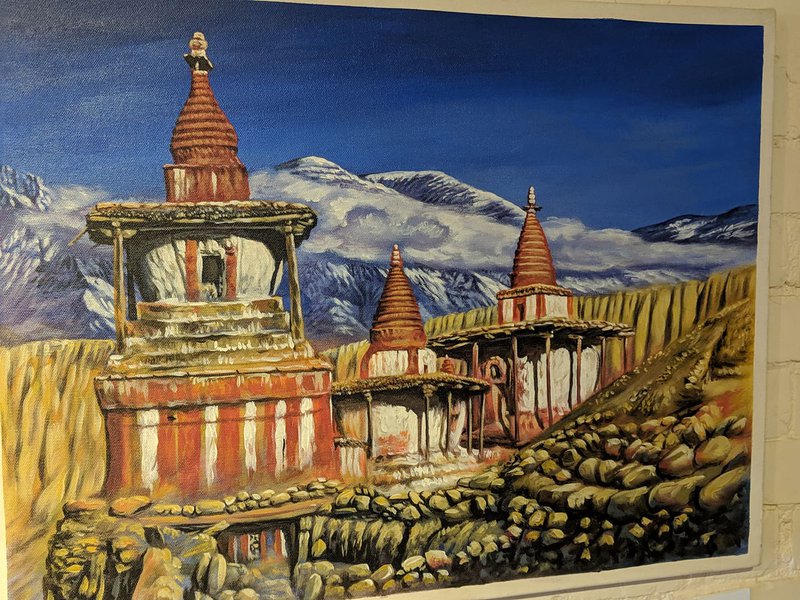 He also painted Lo-manthang ancient Buddhist monasteries, Cave and other important of Mustang.

Earlier, when the border was open to south, winter was the time for trade with Tibet. Now-a-days, the greater part of Upper Mustang’s villagers trek south after the October harvest and spend the cold months earning livelihood in Pokhara or Kathmandu.

Livestock is the most important source of Cash income. People keep the cattle for milk, meat and fuel. Large herds of goat and sheep are driven to the southern part for sale at the end of Summer. Dzopa, a crossbreed from yak and cow, plough the fields. Horse and mules are used to carry the people and loads.

Religion plays an important role in the life of Upper Mustang people. Festivals like Lhosar (Tibetan new year, Jan/Feb), Saka Lugka (Rise for timely rains and a good harvest Feb/Mar) or Duk Chu (Monk’s dance and prayers for a prosperous next years Nov/ Dec) structure the Passing seasons. On various occasions lamas are called to perform rites in individuals houses. Tiji Festival is the great festival among the Mustang people. A famous, 3-day, Tenchi festival trekking is celebrated in front of the King’s Palace. All festivals of Mustang are celebrated according to the Tibetan calendar. Tiji is held normally in the month of April or May.

Much of the history of Mustang is about legends rather than documented facts. However, it is believed that Mustang or the Kingdom of Lo was once a part of Ngari area of Tibet and a loose collection of feudal estates.

Though the people of Mustang live within the geographic boundaries of Nepal, their history is also tied to Tibetan religion and culture, geography, and politics. It was often closely linked to adjoining kingdoms of Western Tibet and, during other periods of history, politically linked to Lhasa, the capital of Central Tibet. Lo was incorporated into the Tibetan Empire by Songtsen Gampo, the most famous Tibetan king.

Much of Ngari became a part of the Malla empire (capital Sinja in western Nepal) by the 14th Century. From the 15th century to the 17th century, Mustang had control over the trade between the Himalayas and India because of its strategic location. 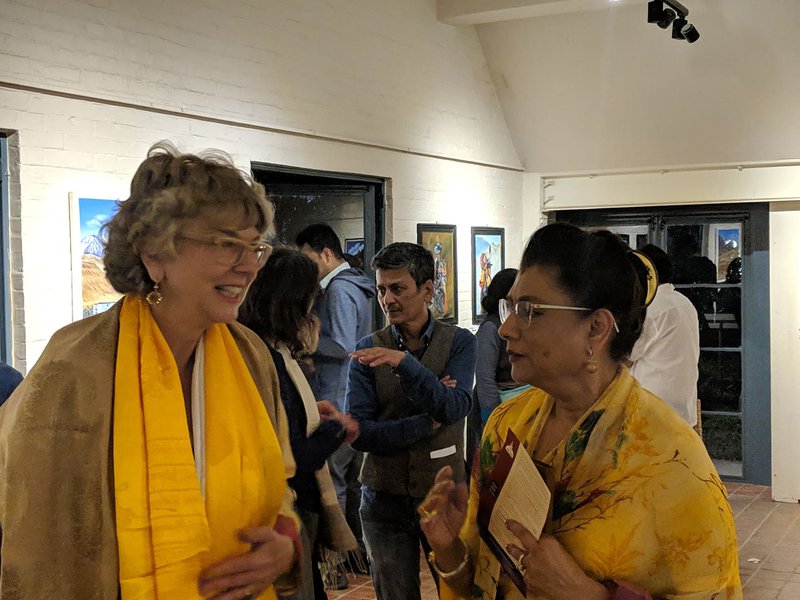 In 1380, Lo became an independent kingdom under Ame Pal. The last royal family traced its lineage for 25 generations, all the way back to Ame Pal.

Ame Pal oversaw the founding and building of much of the Lo and Mustang capital of Lo Manthang, a walled city surprisingly little changed in appearance from that time period. The only remnant of these kingdoms is the still-intact Kingdom of Lo, an area corresponding to the northern third of Mustang District.

In 1769, the army of Prithvi Narayan Shah, the first King the Gorkha Kingdom and the Shah dynasty, unified what was a land of many small kingdoms to forge the kingdom of Nepal. Before that, much of present-day Mustang was ruled by kings from Jumla, a region to the southwest, and independent kings and feudal lords.

Only after the promulgation of Rajya Rajauta (Petty States and Rulers) Ain, 2017 and the Rajya Rajauta Ain" (Rajya System Abolition Act) of 2019 V.S. (1961), Rajas were abolished and few Rajas were still given cultural and religious rights. Mustang is one of them.

Up until 2008, the Kingdom of Lo or Upper Mustang was an ethnic Tibetan kingdom and a suzerainty of Kingdom of Nepal. The suzerainty allowed for a certain level of independence in local governance from the Nepalese central government.

The last official and later unofficial king (raja or gyelpo) of Mustang was Jigme Dorje Palbar Bista (1930–2016), Bista succeeded his father Angun Tenzing Tandul in 1964, and whose lineage dates back to Ame Pal, who founded the Kingdom of Lo six and half century earlier. He died in 16 December 2016 after living a retired life largely in Kathmandu since 2008 when Nepal abolished its own monarchy.

One fascinating feature of the paintings was also the depiction of cliff dwellings. According to estimates, Mustang Caves or Sky Caves of Nepal are a collection of some 10,000 man-made caves dug into the sides of valleys in the Mustang.

Several groups of archaeologists and researchers have explored these stacked caves and found partially mummified human bodies and skeletons that are at least 2,000–3,000 years old.

Explorations of these caves by conservators and archaeologists have also led to the discovery of valuable Buddhist paintings, sculptures, manuscripts and numerous artifacts belonging to the 12th to 14th century. The caves lie on the steep valley walls near the Kali Gandaki River in Upper Mustang.

In 2007, explorers from the United States, Italy and Nepal discovered ancient Buddhist decorative art and paintings, manuscripts and pottery in the Mustang caves near Lo Manthang, dating back to the 13th century.

In 2008, a number of 600-year-old human skeletons were discovered by a second expedition. They also recovered reams of invaluable manuscripts containing writings from both the Bon religion and Buddhism, some of which were illuminated.

Research groups have continued to investigate these caves, as it is not clear who built the caves and why they were built. According to a theory, they may date back to 8–10,000 BCE when Mustang was much greener. 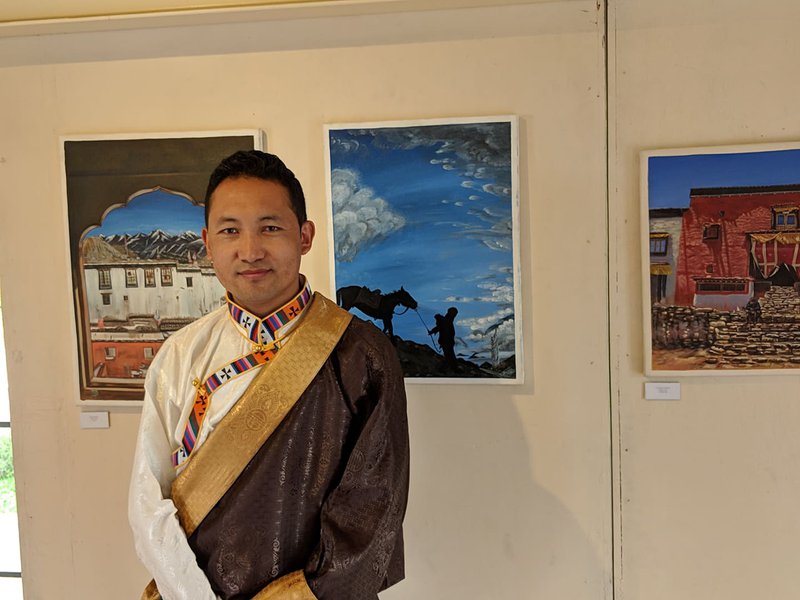 At a time when Upper Mustang is connected by road and there is growing interest among scholars on the history, culture and and life, the painting exhibition assumes a greater significance. 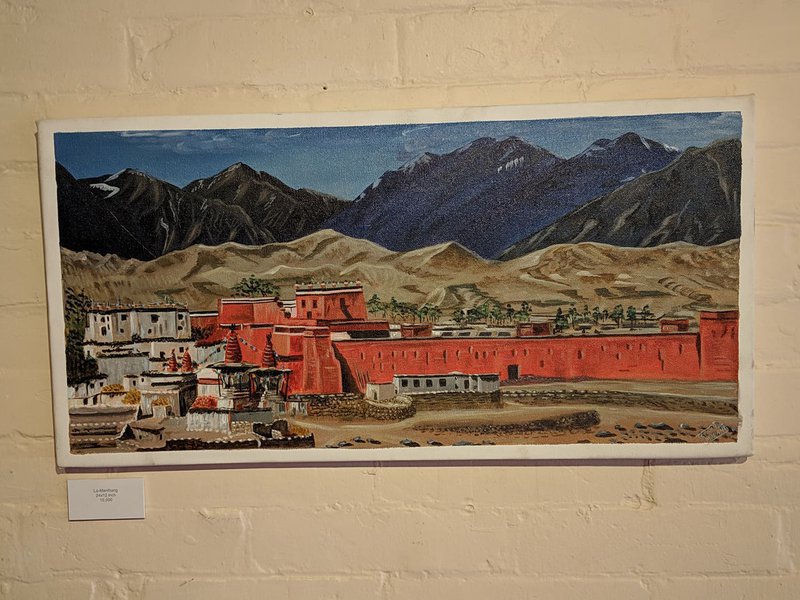 With Dr. Susanne von der Heide's personal initiative, artist Gurung has been able to bring monarchy, monk and monastery together to preserve uniqueness of Mustang. 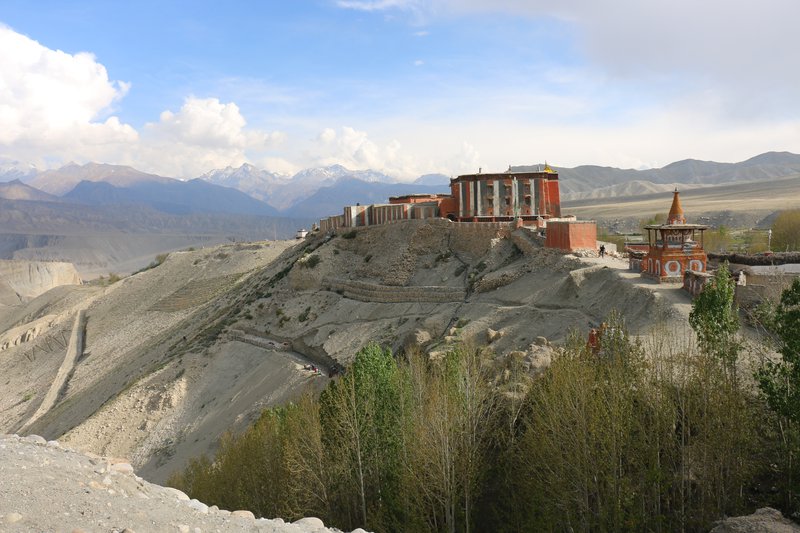 Tourists Have Not Cancelled Their Hotel Bookings In Nepal: HAN’s Chair Rana By NEW SPOTLIGHT ONLINE 2 weeks, 1 day ago

Dr. Dhananjaya Regmi, To Head NTB As A CEO By NEW SPOTLIGHT ONLINE 3 weeks, 1 day ago