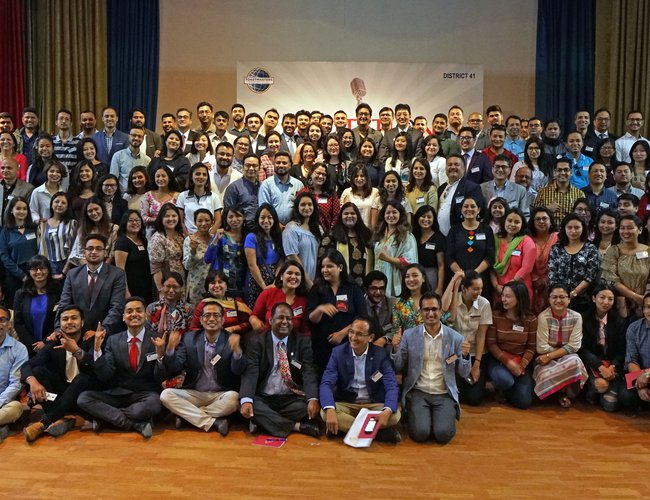 Rajesh Hamal, one of the most reputed public figures, as a guest speaker. Hamal blew the crowd with an eloquent speech explaining his journey and important learning.

The contest had winners from three different areas (Toastmasters clubs are grouped to form an area) battled in the final round of Table Topics Speech and International Speech Contest, the Chief Judge for which was Distinguished Toastmaster (DTM) Pinaki Das from Noida, India.

The winner of the International Speech Contest at the district will further proceed to the region and International levels. All of these contests are organized as per the guidelines prescribed by Toastmasters International.

Toastmasters movement in Nepal is in growing trend, with 16 chartered clubs, more than 500 members and many clubs in pipeline.

Toastmasters International is a world leader in communication and leadership development. Our organization has more than 357,000 memberships. Members improve their speaking and leadership skills by attending one of the 16,600 clubs in 143 countries that make up our global network of meeting locations.

The world needs leaders. Leaders head families, coach teams, run businesses and mentor others. These leaders must not only accomplish, they must communicate.By regularly giving speeches, gaining feedback, leading teams and guiding others to achieve their goals in a supportive atmosphere, leaders emerge from the Toastmasters program. Every Toastmasters journey begins with a single speech. During their journey, they learn to tell their stories. They listen and answer. They plan and lead. They give feedback—and accept it. Through our community of learners, they find their path to leadership.www.toastmasters.org

Nepali Embassy In London To Open All Days By NEW SPOTLIGHT ONLINE 1 hour, 5 minutes ago