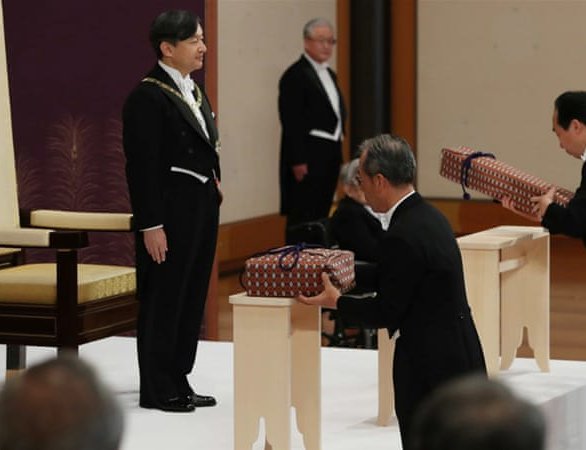 Japan's new Emperor Naruhito has formally ascended the Chrysanthemum Throne, a day after his father Akihito abdicated from the world's oldest monarchy and ushered in a new imperial era.

Naruhito officially became emperor at the stroke of midnight local time (1500GMT Tuesday) but the process will be formalised on Wednesday with the 10-minute ritual, which is off-limits to female royals - even his wife Masako.

It took place on the first day of the new imperial era of Reiwa, meaning "beautiful harmony", which will last throughout Naruhito's reign.

The 59-year-old was presented with the sacred imperial treasures of a sword and a jewel, as well as the seal of state and his personal imperial seal, at a solemn ceremony in the Room of Pine in the Imperial Palace at 10:30am local time (0130 GMT).

Shortly afterwards, joined by Masako and other royals, Naruhito addressed the nation for the first time as its 126th emperor.

The pomp and ceremony will wait until October 22 when he and Masako will appear in elaborate traditional robes for a ceremony in the palace before parading through the streets of the capital to be congratulated by a host of world leaders and royals.

Naruhito will greet his first foreign head of state as emperor later this month, when US President Donald Trump visits Japan to meet the new monarch.

The emperor under Japan's constitution is a symbol without political power.

The Oxford-educated Naruhito faces the delicate balancing act of continuing his father's legacy of bringing the monarchy closer to the people while upholding the centuries-old traditions of the Chrysanthemum Throne.

Like his popular father Akihito, he has warned of the need to remember World War II "correctly" without downplaying Japan's early 20th-century militarism.

He has also spoken of the need to modernise the royal family, and vowed when he married Masako - who left behind a promising diplomatic career - to protect her "at any cost".

She has struggled however to adjust to palace life, including being subjected to enormous pressure to produce a male heir, and has suffered stress-induced "adjustment disorder" for much of their marriage.

The couple have one child, a 17-year-old daughter called Aiko, who cannot inherit the throne because she is female.

Akihito's abdication, the first in 200 years, has resulted in an unprecedented 10-day public holiday for the famously hard-working Japanese, with many taking advantage of the break to travel.

But despite the holiday exodus, and steady driving rain on Tuesday night, crowds still gathered at Tokyo's famous Shibuya crossing at the clock struck midnight to welcome the Reiwa era.

"The emperor was a good person... He was the symbol of Japan," said Rika Yamamoto, a 24-year-old company employee sheltering under an umbrella on the crossing.

"I hope the new emperor will carry on the kindness the old emperor had."

Uyghur Activist Protests Outside Chinese Embassy In US On Anniversary Of Sister’s Detention In Xinjiang By Agencies 22 hours, 34 minutes ago

Why Singapore's COVID-19 Death Rate Is The World's Lowest By REUTERS 3 days, 18 hours ago

The Peace Treaties Between The UAE, Bahrain And Israel Are Signed By Agencies 5 days, 6 hours ago

Bahrain Agrees To Normalize Relations With Israel By REUTERS 1 week, 2 days ago