At a time when the law and order situation is deteriorating, state institutions are weak and activities of inimical forces are growing in the absence of strong institutions in Nepal, Narendra Modi has started his second tenure as the prime minister of India with a message to follow a peaceful neighborhood policy. However, even before starting the second tenure by Modi, political leaders, intellectuals and intelligentsia, who were the part of ongoing changes of Federal, Secular, Democratic Republic of Nepal, are issuing nervous, panicky and contradictory statements based on their imagination on India’s possible new policy towards Nepal. 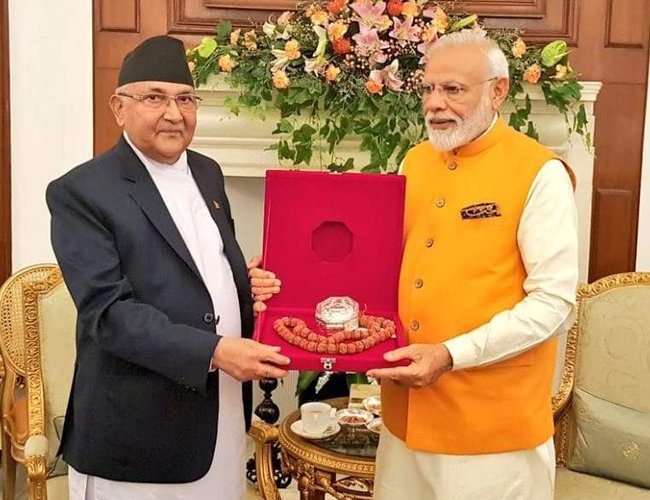 When Prime Minister K.P. Sharma Oli, a staunch secular and communist ideologist, met Prime Minister of India Narendra Modi in New Delhi on May 30, he presented PM Modi a gift of Rudraxa seed, which is known as Elaeocarpus ganitrus roxb, (Rudra's Tear Drops for Hindus).

Communist and secular Prime Minister Oli, who received Ph.D degree from a Christian Missionary University of South Korea a week ago in Kathmandu, chose a spiritually sacred Rudrax seed as a gift to PM Modi, a devoted Hindu. Rudrax seeds are traditionally used as prayer beads in Hinduism.

Showing two characters in a matter of a week, Prime Minister Oli has exposed his dubious belief. Although PM Oli can justify both, securing a recognition from a Christian Missionary University and gifting Rudraxa to Prime Minister Modi, a devout Hindu, as his secular character, his act is likely to erode his credibility.

Prime Minister Oli is not alone to show such a character. One can see such double standards in Nepalese leaders, intellectuals and intelligentsia following the results of Indian elections. 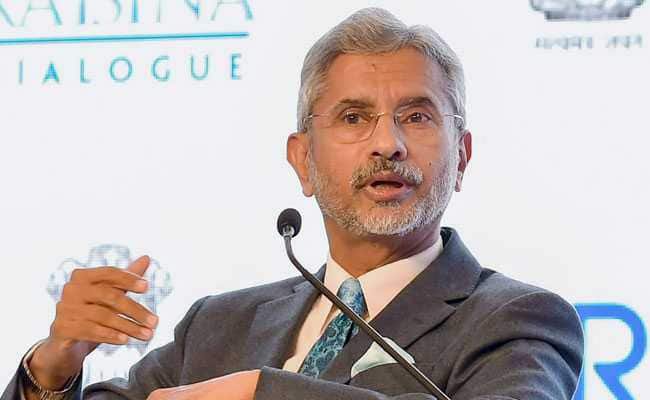 Since India is Nepal's close neighbor with so many proximities and sharing similar civilizations, it is understandable to see keen interests of Nepalese from all sides in the Indian elections outcome. However, their perceptions on the outcome of Indian elections and comments regarding particular individual look eccentric.

Almost every day since BJP swept the elections in India, Nepalese political elites, intelligentsia and ruling class, who have hailed promulgation of the new Federal, Republic and Secular Constitution as a victory against interventionists India, are issuing nervous and panicky statements.

Although they are not harsh against current constitution, which is a by-product of a 12-point agreement signed under the mediation during the tenure of India’s foreign secretary Shyam Sharan, they are issuing statements and comments portraying newly appointed Minister of External Affairs of India S. Jaishanker as an interventionist given his mission during the promulgation of new constitution followed by subsequent events up to border disruptions or blockade.

“If Minister of External Affairs S. Jaishanker who visited as emissary of Prime Minister Modi and honestly advised as per the direction in words and deeds as a villain, how could a foreign secretary, Sharan who defied the direction of then PM, imposing his own will in Nepal and intervened in internal affairs be a hero?”asked Yubaraj Ghimire in his interview in AP1 Television. "There is a double standard in analyzing the events of two different periods."

Nervousness and panic further intensified after the appointment of former foreign secretary S. Jayashanker as the minister for External Affairs, who visited Nepal as a special envoy of Prime Minister Modi advising Nepalese leaders to make the constitution inclusive and a consensus document.

Although nothing has drastically changed during the first tenure of Indian Prime Minister Modi, common people see no reason for political leaders, intellectuals and intelligentsia as associated with the current system to issue panic statement on the basis of personal imagination regarding Government of India's future policy. Those who are part of the 12-point agreement are afraid of their own experiences of past.

"Jai Shankar’s induction is a bold acknowledgement of his diplomatic acumen and intellectual sharpness. He will have to measure up in balancing Malabars with Wuhans as also crafting a credible Neighborhood First 2.0. Testing times ahead for him and India," tweets renowned Indian scholar Sukh Deo Muni in his tweet.

If the group of Nepalis accept interventions of previous foreign secretary as a blessing, there is no reason to blame other former foreign secretaries as interventionists and villains. "In the case of foreign minister Jaishanker, he did strictly what Prime Minister advised him to do. Whereas Sharan went beyond the mandate of his political master," writes Ghimire in his column in Deshsanchar.

Whether prime minister Oli or intellectuals, there is double standard at work. If double standard is a Nepalese intellectual character, it will create more distrust and mistrust in the state to state relations in coming days. For long, trust deficit remained a major problem between Nepal and India which obstructed cordial and warm relations.

Former ambassador to India and renowned expert on Nepal-India relations Professor Lok Raj Baral expresses the view in his interview that there is nothing to worry saying that India's policy towards Nepal continues.

At a time when India has a prime minister who firmly believes in India's traditions, religion, values and culture to bring harmony in India, Nepal is under a rule of communist party, which does not believe in traditions, values and religions from heart and mind.

With the rise of communist party in power with two thirds majority, PM Oli-led government is, knowingly and unknowingly, shaking and weakening Nepal’s traditional religious foundations.

Prime Minister of India Modi in his first address following elections victory has challenged the ongoing secular interpretation of India and defended tradition and civilization of India as source of harmony in unity.

Although Nepal and India are two independent nations, they share one civilization. In this context, PM Modi’s statement too have a message to Nepal as well. Given the recent wipeout of communist party in India, the wind blowing in southern neighbor will likely to make differences in Nepal as well.

Along with international conventions and norms, Nepal and India relations are also determined by the shared values, culture, religion and geography. However, the current ruling dispensations do little care on tradition of Nepal. The Guthi bill, which is now registered in National Assembly, exposed their faith towards Nepal's traditions. If the bill passes without amendment, it will completely hand over rights of property and lands of Nepal’s Hindu temples and shrines to individual tenants.

"This bill will completely collapse our current system. Forget about others, even Pashupatinath Temple will be landless and the temple lands worth of billions of rupees will be transferred to individuals," said NC member of parliament at National Assembly Radheshyam Adhikari.

At a time when PM Oli is handing over Rudrax to PM Modi showing religious importance, members of parliament representing his party are defending the new Guthi bill. This is where Nepal is now. 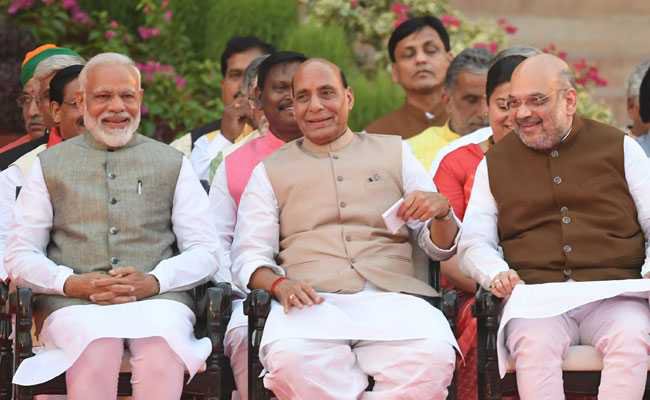 Since the promulgation of new constitution, billions of cusec of water have already flown in Bagmati river with changes in political alliances, equations and ideologies. However, a group of politicians, intellectuals and intelligentsia, who defied and humiliated India's foreign secretary in 2015 ignoring his advice to make functional and inclusive constitution, are more panicky.

Former prime minister and Maoist People’s Government head Baburam Bhattarai, who is known for his wider contact with Indian political leaders and intellectuals of Jawaharlal Nehru University, also wrote an article expressing some alarm how Nepal and India Relations will take course in coming days under the new foreign minister.

Dr. Bhattarai was chairman of one of the committees of Constitutional Assembly when Jaishanker returned with humiliations. “Let’s move ahead learning the lessons,” tweeted Dr. Bhattarai, who has joined Upendra Yadav-led Federal Socialist Party, which took the responsibility of blocking the border and called a violent agitation in Terai.

In the last four years since the promulgation of New Constitution, political equation in Nepal has drastically changed. PM Oli, who publicly accused two Madhesh based Parties, Sanghiya Samajbadi and Rashtriya Janata Party Nepal, for playing India’s game blocking the border, has included one of its leaders as DPM in his cabinet.

Sanghiya Samajbadi Party’s leader Upendra Yadav, who led the border blockade in Nepal India border is deputy prime minister in Oli’s cabinet. Yadav, who opposed the present constitution as incomplete document, has already given red carpet to former Maoist leader Bhattarai as the cochairman of his party.

More than 60 Madheshis were killed and hundreds wounded following five months of agitation against the constitution. Dr. Bhattarai, who played a crucial role to promulgate the constitution, joined the party which launched the agitation.

Internally, there is a grand equation among supporters and antagonistic forces of constitution sharing powers and position forgetting each other’s role. However, the fierce comments against Prime Minister Modi and his new foreign minister S Jayashanker are yet to recede.

Although BJP's government led by Atal Bihari Vajpayee had reportedly backed Nepal's current political change, there is no reason for Nepali to so much panic with the surge of BJP's strength in India. However, with PM Modi at the center, Nepalese politicians, intellectuals and experts have been writing opinions, commentaries and articles with speculations and suspicions on coming days.

After the wipeout of communist parties in India in recent elections, there are more worries in the communist camps. As in the past, communists thrived in anti-Indian slogans. It may not surprise many to see communists can jump to cash on-going tempo against PM Modi and his external affairs minister Jayshanker to strengthen their position.

What Nepal and India Need to do

“The dynamics of the relationship between India and Nepal has been changing rapidly over the past few decades. The historic, social-cultural and socio-economic ties between the two ancient civilizations have been repeatedly placed in front of strong challenges over the past few decades – much to the surprise of New Delhi and Kathmandu alike,” said SK Basu, an Indian strategic writer based in Canada.

"The relationship between these two adjacent countries has been losing its warmth over the years and that’s why New Delhi needs to be extremely cautious and careful not to push Nepal further into the hands of an aggressive, hostile and increasingly confident China."

"India-Nepal socio-economic and socio-cultural ties need to improve significantly over the next 10-20 years to start working together in developing a solid strategic geopolitical and diplomatic relationship," writes Basu.

Despite going through some misunderstanding in the first tenure, Indian Prime Minister Modi, in his recent meetings with PM Oli, expressed his desire to take India Nepal relations to a new height.

However, growing instability, rising incidences of violence, crumbling economy, weakening state authority and deteriorating law and order, Nepal's current course is heading towards anarchy. The emerging scenario will need to address building trust with each other.

JICA To Support Improvement Of The Inclusive Sanitary Environment in Pokhara By NEW SPOTLIGHT ONLINE 3 days, 7 hours ago

The United States Provides Additional Funding Support to Nepal Amidst the Second Wave of COVID-19 By NEW SPOTLIGHT ONLINE 3 days, 10 hours ago