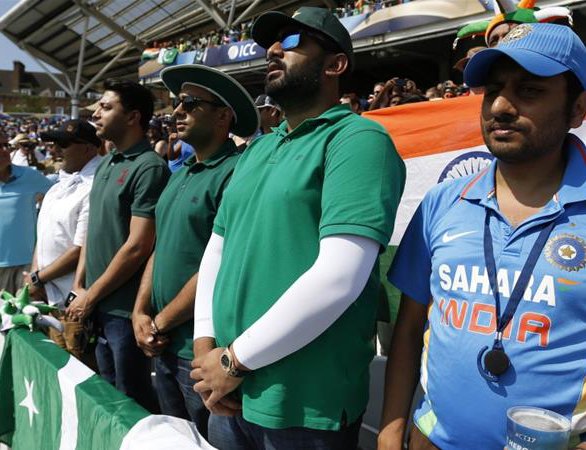 Two sides take on each other in the World Cup, just months after calls for it to be cancelled following Pulwama attack.

Manchester, United Kingdom - Barely four months after almost going to war, Pakistan and India are set to renew their rivalry on Sunday, this time on a cricket field.

A few months ago, this fixture was in doubt. In February, a suicide attack in Indian-administered Kashmir killed 42 paramilitary troops with the Pakistan-based group Jaish-e-Muhammad (JeM) claiming responsibility.

In response, India launched an airstrike in Pakistan-administered Kashmir, claiming to have targeted a JeM "training centre". Both sides then deployed fighter jets resulting in an Indian aircraft being shot down and the pilot captured.

His return by Pakistan a few days later helped subside the tension but there were calls for Pakistan to be thrown out of the World Cup that were rejected by the sport's governing body.

Indian politicians, former cricketers and Bollywood celebrities took to social media, backing the calls to break off all ties with Pakistan, including on the cricket field.

In March, the Pakistan Cricket Board (PCB) Chairman Ehsan Mani said "cricket and sport should not be used for politics" but analysts say it's not that easy, especially when it comes to cricket's greatest rivalry.

"As unfortunate as it is, cricket and politics are hard to separate in South Asia," Asfandyar Mir, Fellow at Stanford's Center for International Security and Cooperation, told Al Jazeera.

"Since the 2008 Mumbai attacks, an influential chunk of the Indian security establishment believes that isolating Pakistan, including through cricket, and rallying the rest of the world to the cause will bring about a change in Pakistan's policies.

"They also believe that rebuking Pakistan in every possible way, including by not playing cricket, has a premium in Indian domestic politics. It is portrayed as a tribute to Indian civilians and soldiers who have died in terrorism or in border skirmishes with Pakistan."

But the calls for boycotting the match were driven by "agendas fueling the fire", according to Rohit Mahajan, a journalist for India's The Tribune.

"The calls came at a time when people were trying to make political capital out of the situation," said Mahajan, pointing to the Pulwama attack's close proximity to the Indian general elections that resulted in a landslide win for Narendra Modi's BJP.

"The loss of lives, the action by India's armed forces, the capture of the pilot, it all seemed to cause a surge in nationalistic feelings. Obviously, when families of those who lost their lives at the borders watch the teams play cricket, it won't be a pleasant situation for them. But we have to make every effort possible to engage and sports is something that can help achieve that."

An India-Pakistan clash is normally the most-watched and anticipated match of a cricket World Cup. Such is the hype and potential of the game, the International Cricket Council (ICC) admitted three years ago to fixing the draws of tournaments in order to have both sides in the same group.

Tickets for Sunday's game were sold out within 48 hours of their release and more than a billion people are expected to tune in for the match.

Pakistan has lost all six matches it has played against India in a World Cup. But as Virat Kohli, India's captain, played down the hype, claiming the team was going to approach it as just another match, he claimed fans' sentiments were something he could not control.

"I can't tell the fans to think in a particular manner," said Kohli on the eve of the match.

"We [players] can't get emotional or over-excited with any occasion. Obviously, the player's mindset is different from the fans and you can't mix these two. From fan point of view, looking at the atmosphere and frenzy around the game, I wouldn't say it is easy to think like a player but for the players it's very, very crucial to be absolutely professional."

A month after the Pulwama attack, India's players took the decision to pay tribute to those who lost their lives by sporting army camouflage caps in a match against Australia.

The ICC refused to sanction the Indian team, claiming the team had sought permission to use the caps as part of a "fundraising drive and in memory of the fallen soldiers who have died".

India's wicket-keeper MS Dhoni was also told by the ICC to remove a military insignia from his gloves during the World Cup.

"It [the episode] tells you a lot about the political climate in India, especially with respect to Pakistan," said Mir.

"It is symptomatic of the hardening of national identity in recent years, and the fact that overt displays of patriotism have a special currency."

There has also been an angry response from Indian supporters after a Pakistani mobile network provider aired an advertisement featuring a man that resembled the Indian pilot who was captured earlier this year.

"Due to the politicisation of cricket, it has become an emotional sport in both countries. We have to first depoliticise the sport and then educate our masses to take sport as a sport and not as a war between the two nuclear rivals," said Zahid Ahmed, a research fellow at the Alfred Deakin Institute for Citizenship and Globalization.

"There is also a need to educate the players to just be players and not become soldiers of their countries. The two recent incidents [army caps and Dhoni's gloves] may encourage a negative trend among players of other countries. Ultimately this may lead to more politicisation of cricket which is doing more damage to the sport than any good."

But while Pakistan's coach Mickey Arthur backed the huge role cricket can play in normalising the environment and political tension, he reminded his players to focus on the on-field matters, ensuring that the cricket performance is not diminished by the political situation across both borders.

"Cricket is a unifying vehicle. People get behind their countries and show a lot of passion and emotion," said Arthur.

"It's a wonderful opportunity for both countries to showcase their talents. The game will be played in a very, very good spirit. It really doesn't get bigger or more exciting than that. I'm telling our players in the dressing room - you could be a hero. Your careers are going to be defined by a moment in the game."

The predicted rain on Sunday may end up having the final say on proceedings but the training session on Saturday showed a relaxed set of players from both sides, a stark contrast to the situation that prevailed for weeks earlier this year and on social media in the lead-up to the match.