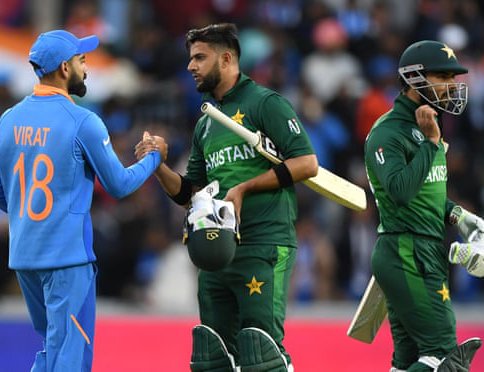 India extended their unblemished World Cup record against Pakistan after Rohit Sharma's century and tidy bowling secured their 89-run victory via the Duckworth-Lewis method in the tournament's most anticipated group match on Sunday.

India set Pakistan a 337-run target to chase down. However, after a spell of rain interrupted the Pakistan innings in the 35th over, the target was adjusted to 302 runs, while the length of the innings was revised down to 40 overs.

Once the covers came off, Imad Wasim and Shadab Khan kept up a steady rhythm but it just wasn't enough to score the 136 needed off 30 balls to win.

Rohit Sharma was named Man of the Match for his second century this World Cup.

Winning captain Virat Kohli after the match advised against allowing emotions to guide the game. "We cannot approach it like fans. As cricketers, you have to understand what needs to be done on the field."

"Rohit's knock was outstanding but to get to 330 you need a team effort and that is exactly what happened."

Pakistan, whose only 2019 pool win so far was a shock defeat of hosts England, were never truly up with the rate in the showpiece match of the 10-team round-robin stage.

They still had hope at 117-1 even though the most made by any side batting second to win a World Cup match is Ireland's 329 for seven against England at Bangalore in 2011.

But Kuldeep Yadav then struck twice to spark a collapse that saw Pakistan lose four wickets for 12 runs in 18 balls as they slumped to 129 for five in 27 overs ─ long past the 20-over cut-off point needed for a result under D/L.

"Kuldeep is a wicket taker. The ball to get Babar Azam was brilliant. A very important moment in the game," Kohli added.

Lokesh Rahul, promoted in the absence of the injured Shikhar Dhawan, and Rohit Sharma started the Indian innings, whereas the pairing of Mohammad Amir and Hasan Ali shared the new ball for Pakistan.

Amir, as he has done multiple times in the World Cup so far, started with an excellent opening over — a maiden. The second one bowled by Ali was expensive, however, with eight coming off it, including a boundary off an inside edge.