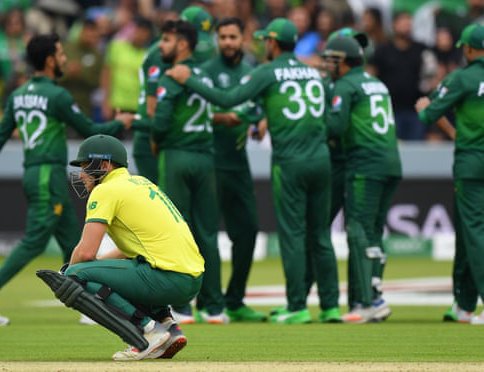 Pakistan kept their chances of qualifying for the semi-finals of the World Cup 2019 alive after registering a 49-run win over South Africa at the Lord's cricket ground on Sunday. The Proteas now have no chance of advancing any further in the tournament after suffering their fifth loss in seven matches.

Chasing 309 for victory, South Africa were restricted to 259 for 9 in 50 overs with leg-spinner Shadab Khan and Wahab Riaz picking up 3 wickets each while Mohammad Amir contributed with 2 wickets. Shaheen Shah Afridi also got a wicket.

Pakistan are still in with a shot at making the cut for the final four but they need to win their remaining three matches and then hope for some of the other results to go in their favour to stay alive in the competition.

Pakistan will face New Zealand, Afghanistan and Bangladesh in their remaining matches while the Proteas have Sri Lanka and Australia remaining in their roster before they return home after a disappointing campaign.

Electing to bat first, Pakistan put up 308 for 7 against South Africa after a swashbuckling 89 off 59 balls by the recalled Haris Sohail in a late flurry at Lord's.

Haris, brought back for the dropped Shoaib Malik, featured in key partnerships of 81 with Babar Azam (69) and 71 with Imad Wasim (23).

Haris was out trying to slog the penultimate ball, his 59th of a superb innings that included three sixes and nine boundaries.

Pakistan were off to a brisk start thanks to Fakhar Zaman and Imam-ul-Haq, both of whom made identical scores of 44 and added 81 in 15 overs for the opening partnership. But both openers were dismissed by leg-spinner Imran Tahir, who became South Africa's leading wicket-taker in World Cups with 39, one more than retired fast bowler Allan Donald.

Tahir achieved the record in style, brilliantly catching Imam one-handed low to his right off his own bowling. In taking 2-41 from 10 overs, Tahir's performance will have also heartened Pakistan's spinners.

Babar and Mohammad Hafeez, dropped on 2 en route to 20, made Pakistan's fans bubble back up again, but it was the stand between Babar and Haris which lifted their side from scratching around 5 an over.

Babar was out for 69 but Haris continued to take the South African bowlers to the cleaners.