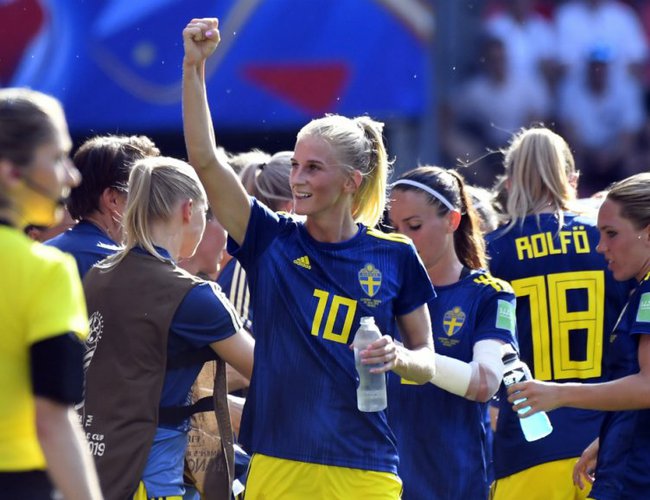 Two-time champions Germany suffered a shock Women's World Cup quarter-final exit as Sweden came from behind to beat them 2-1 in Rennes.

Germany had gone ahead through Lina Magull's acrobatic finish but Sweden responded when Sofia Jakobsson ran clear on goal and coolly finished.

Sweden's semi-final opponents are the Netherlands, who defeated Italy 2-0.

Sweden and the Netherlands join Great Britain - who benefit from England's run to the last four - in qualifying for the 2020 Olympic Games in Tokyo as the top three European teams at the World Cup.

Germany will not get the chance to defend the gold medal they won at Rio 2016.

With their pedigree in the women's game, Martina Voss-Tecklenberg's Germany side were heavy favourites to progress having triumphed in the tournament in 2003 and 2007, as well as claiming eight European Championship titles.

Chelsea's Swedish defender Magdalena Eriksson had spoken before the game about being "tired of hearing about this German ghost", having not beaten their opponents in a major tournament since 1995 and losing to them in four major finals, including the 2003 showpiece.

There looked to be more disappointment on the cards for the Swedes as goalkeeper Hedvig Lindahl had to keep out Lina Magull's free-kick and Lea Schuller's header early on.

Magull then got on the scoresheet when she controlled and brilliantly converted the opener from Sara Dabritz's pass, but Sweden turned the game around thereafter.

Germany had not conceded a single goal in this tournament but that changed when former Chelsea forward Jakobsson latched on to a long ball and equalised, before Blackstenius scored from close range after German goalkeeper Almuth Schultz parried Fridolina Rolfo's header.

The expected German onslaught failed to materialise and their best chance of taking the game to extra time fell to teenager Lena Oberdorf with two minutes remaining, but she headed wide of an empty net after Lindahl missed the cross.

England midfielder Jordan Nobbs on BBC One: "This is the beauty about football, everyone thought Germany had a route to the final but Sweden have got everything right today. They counter-attacked really well, were clinical in front of goal and their defence was one of the best in the tournament so far. Playing against Germany was tough but they showed why they are into the next round.

"It is a big surprise. Not many people have been talking about this side of the draw because it was all about France, the USA and England. Everyone thought Germany would cruise to the final."

The Netherlands reached the Women's World Cup semi-finals for the first time thanks to two second-half headers against Italy in Valenciennes.

And Stefanie van der Gragt powered home another Spitse free-kick to seal their place in the last four. The European champions will face Germany or Sweden in the semi-final.

The Netherlands are playing at a World Cup finals for only the second time, and went out in the last 16 in 2015.

Set-pieces were the difference and I think Italy will be disappointed with their performance. I don't think they showed their true class, and as the game went on they lost emotional control

They were victors at Euro 2017, their home tournament, and they had great support in Valenciennes, which is only a two-hour drive from the Dutch border.

It was an even first half at the Stade du Hainaut but the Netherlands blew Italy away after the break.

They had 15 shots in the second half alone, including Danielle van de Donk's wonderful curling chip from the edge of the box which hit the bar.

Italy had no answer for them, and Spitse - who had already blasted a long-range free-kick inches wide - was the decisive figure in the end. Her free-kicks were headed home by Miedema and then Van der Gragt in the space of 10 minutes.

She has now set up four goals in the tournament, more than anybody else.

The Netherlands will compete in next year's Olympics in Tokyo as a result of being one of the final three European teams in the World Cup.

Italy were the surprise team of the tournament. This was their first World Cup in 20 years and they topped a group including Australia, Brazil and Jamaica before beating China in the last 16.

Captain Sara Gama said in the build-up to the game that they wanted to build a legacy in Italy, adding: "We must give ourselves a timeline to avoid wasting everything we have done and carry on the project."

Italy gave it a really good go in the first half and Valentina Bergamaschi should have done better with two free shots in the area, but both were saved by Sari van Veenendaal.

They understandably tired in 34C heat in the second half - the women's game is not fully professional in Italy - and were well beaten in the end.