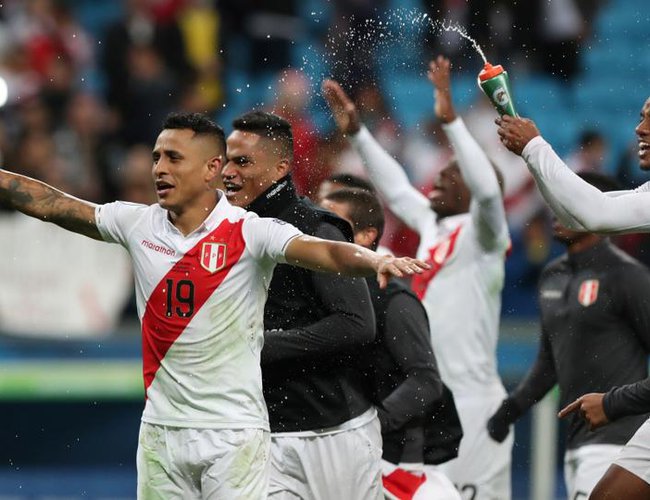 Peru stunned defending champions Chile 3-0 to reach the final of the Copa America for the first time in 44 years on Wednesday.

Goals from Edison Flores, Yoshimar Yotun and Paolo Guerrero handed Peru a deserved win which sends them into a final against Brazil at the Maracana Stadium on Sunday.

The stunning upset prevented Chile's golden generation from challenging for a third straight title, following their wins over Argentina in 2015 and 2016.

Instead the finalists from the previous two editions will meet in Saturday's third-place play-off in Sao Paulo.

Little was expected of Peru in the knock-out stages after they ended the group phase with a humbling 5-0 thrashing by Brazil.

But after riding their luck — and being saved by VAR three times — to beat Uruguay on penalties in the quarter-final, they were a completely rejuvenated outfit in Porto Alegre.

"The team has gone back to its essence, passing the ball and running hard," said goalscorer Yotun.

"The game against Brazil was tough but this will be a different match. It's a final that's there to be won. We have to work hard and lift this cup."

Goalkeeper Pedro Gallese, the villain of that 5-0 defeat, was again faultless, as he had been in the quarter-final when decisively saving Luis Suarez's shoot-out penalty.

He again saved a penalty and made a number of other vital stops.

"It's painful for all of us because we fought for another title," said Chile captain Gary Medel.

"Peru played a great match and we have to congratulate them. The played really well, worked really hard and deserve to be in the final."

From the start Peru dominated the reigning champions, with Christian Cueva wastefully shooting wide two minutes in after he was teed up in space by his captain Guerrero.

Flores took advantage of an Erick Pulgar slip in midfield to dart towards goal but he dragged his weak shot woefully wide.

But a minute later he was alone at the back post to lash home left footed from an Andre Carillo flick on from Cueva's cross.

Striker Guerrero made a timely intervention in his own area to prevent a Sanchez corner from sneaking in at the near post.

Yotun doubled the lead on 38 minutes after punishing Chile goalkeeper Gabriel Arias's rush of blood to the head.

Carillo chased a long ball down the right hand side and beat Arias, who ill-advisedly had charged from his area, to the ball before picking out Yotun on the edge of the 18-yard area.

Faced with four back-tracking defenders, Yotun calmly controlled the ball on his chest and sent a low volley straight down the middle of the empty goal.

Equally importantly was Gallese's one-hand save to tip over a Jose Fuenzalida volley a minute before the break.

A 2-0 half-time lead was the least Peru deserved after an enterprising performance against tentative opponents.

Chile were a lick of paint away from getting back into the match on 51 minutes when Eduardo Vargas's flicked header beat Gallese but agonisingly came back off the post.

Peru should have put the game to bed on a rapier counter-attack on the hour but Guerrero and Cueva passed rather than shooting and Yotun ballooned over from six yards with the goal gaping.

Gallese then tipped over a looping volley from Beausejour and 15 minutes from time he stayed big to block a shot from Vargas one-on-one.

He was unbeatable and dived low to his right to palm out a venemous Sanchez effort from 20 yards.

Guerrero put the icing on the cake in injury time after rounding Arias, but Gallese had the last word from the penalty spot.