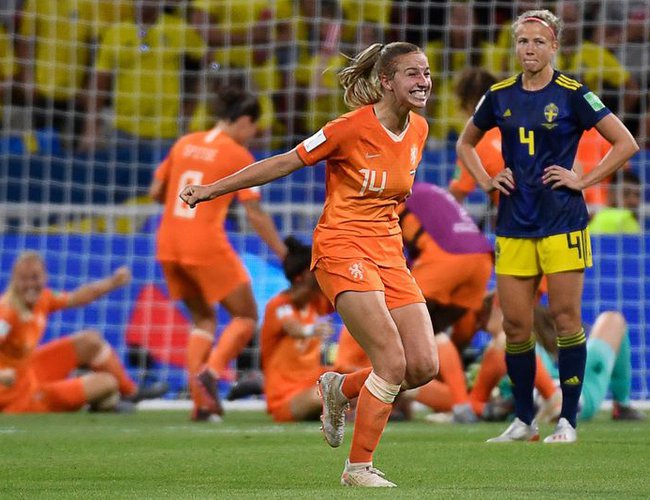 The European champions will face holders the United States in Lyon on Sunday, after Jill Ellis' side's win over England.

The 48,452 fans inside the Stade de Lyon had looked set to endure a nervy penalty shootout, before Groenen's crisp low shot sunk the Swedes' hopes of reaching their second final.

Former Arsenal goalkeeper Sari van Veenendaal had earlier kept the Dutch on level terms with three important saves, before Gunners striker Vivianne Miedema's header was touched on to Sweden's crossbar at the other end.

Substitute Shanice van de Sanden's fierce shot was then tipped wide by Hedvig Lindahl to send the game to extra time and the Dutch eventually found a way through.

Sweden, who were playing in their fourth semi-final after stunning Germany in the last eight, will now face England in Saturday's third-place play-off in Nice (16:00 BST).

Wednesday's disappointing contest failed to match up to the entertainment, the quality or the intense atmosphere that was seen in Tuesday's gripping tie between England and three-time champions the USA.

But the Netherlands' achievement - reaching the final while competing in only their second Women's World Cup - was greeted with emotional celebrations at the full-time whistle after a tense 120 minutes and their colourful fans danced with joy in the stands.

Ranked eighth in the world, they have enjoyed a rapid rise towards the top of the women's game, two years after winning the Euros on home soil, and they have been backed by a lively, dancing horde of passionate fans all across France.

Sarina Wiegman's side beat New Zealand 1-0, Cameroon 3-1 and Canada 2-1 to top Group E and reach the knockout stages for the second time.

A dramatic 2-1 win over Japan and a 2-0 quarter-final victory against Italy followed to put them into their first semi-final, and they narrowly overcame the Swedes in Lyon despite never really playing their best football.

PFA player of the year Miedema, who was the top scorer in the English Women's Super League in 2018-19, was relatively quiet but did almost win the tie in normal time when former Chelsea stopper Lindahl did brilliantly well to save her header.

Both goalkeepers had fine games as a well-organised and compact Sweden side made it hard for the Dutch to create chances.

But Groenen's winner saw the Scandinavians eliminated by the same side that knocked them out of the European Championship at the quarter-final stage in 2017.

Sweden will still look back on their run in France fondly, after wins over Chile and Thailand saw them reach the knockout stages, before they rested key players and lost 2-0 to the USA to finish second behind the pre-tournament favourites in Group F.

Impressive wins over highly rated Canada and Germany followed, as the Swedes threatened to match their 2003 run to the final, but instead it is the Dutch who will be the Women's World Cup's first European finalists since the Germans' triumph in 2007.

With little between the two sides, the introduction of Lyon's former Liverpool winger Van de Sanden from the bench added pace to the Dutch attack and they looked slightly the stronger in the additional 30 minutes.

Former Chelsea midfielder Groenen, who agreed to join Manchester United from German club Frankfurt in May, was mobbed by her team-mates as the full-time whistle blew.

However, the game ended moments after Sweden's former Manchester City midfielder Kosovare Asllani was carried off on a stretcher with a concerning injury following an awkward landing. She was taken to hospital but Sweden will hope she can feature against England on Saturday.

Former US goalkeeper Hope Solo: "The USA are already fitter than every other team. This doesn't look good for the Dutch going into the final. They will have to have the game of their lives against the United States."

Ex-England striker Dion Dublin: "USA have got their hands on it already for me, these teams are miles apart. It should be a walk in the park."

Former Scotland winger Pat Nevin: "Are they even close to taking on the USA? Is even one Dutch player good enough to get into the USA team?"

The Netherlands are the eighth different team and fourth European nation to reach a Women's World Cup final.

No side have lost more Women's World Cup semi-final matches than Sweden, with this their third loss in four.

This was the first Women's World Cup semi-final match to be settled in extra time.

Groenen's winning goal was the Netherlands' first from outside the box in the Women's World Cup since their first ever goal in the competition, with each of their last 12 being scored inside the box.

Sweden's Asllani won seven fouls, more than any other player in a single game at this year's tournament.

It will be only the second WWC final to be contested by two female coaches, following Germany v Sweden in 2003.