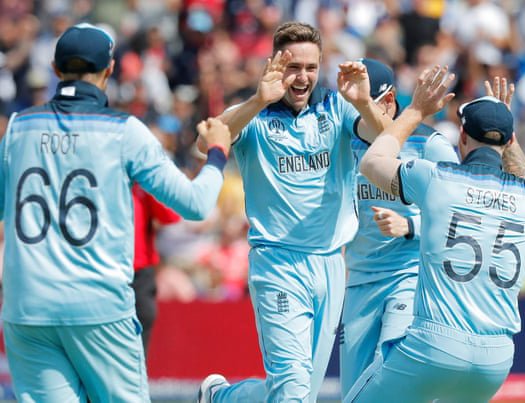 England surged into their first World Cup final for 27 years with a sensational eight-wicket demolition of Australia at Edgbaston.

The hosts will have the chance to lift the trophy for the first time when they meet New Zealand at Lord's on Sunday.

A first win in a World Cup knockout match since 1992 was secured over the defending champions on a day that will live long in the memory, justifiably alongside anything from the 2005 Ashes or the 2010-11 tour of Australia.

It was built on a riotous opening seven overs, when Australia were reduced to 14-3 by the new-ball brilliance of Chris Woakes and Jofra Archer.

Steve Smith, so often England's nemesis, held Australia together with 85, helping them to a total of 223 that at least gave them something to bowl at.

But home nerves over the menacing presence of Mitchell Starc were allayed by a prolific opening partnership between Jason Roy and Jonny Bairstow, who added 124 for the first wicket.

Roy crashed 85 before Joe Root and Eoin Morgan took England to their target with 17.5 overs to spare.

The ease of England's progression to the final was such a contrast to the group-stage defeat by Australia that left them on the brink of elimination.

Since then they have beaten India, New Zealand and turned in this, their best performance of the tournament to date.

They will start the final, which will be shown as free-to-air on Channel 4, as firm favourites to be crowned world champions.

Until Saturday's final round of group games, England were set to play India in this match.

Although they would never admit it, the opportunity to play their oldest enemies at a ground where Australia have no win of any kind since 2001 and England had won their previous 10 matches was absolutely perfect.

The toss seemed like a huge boost for Aaron Finch's men - batting first has been a big advantage in the tournament - but that was to discount the carnage that would follow.

Edgbaston exploded with noise as Finch, David Warner and Peter Handscomb were removed, cheers that were matched in volume by the boos for Warner and Smith.

Although Smith ensured what the crowd knew could have been a tricky chase - they cheered as Roy defended Starc's first over - Roy injected belief with an outrageous flick for six off the left-armer.

As it became clearer that England were strolling, the party moved through the gears.

Starc was serenaded with the song that tortured Mitchell Johnson, and the Hollies Stand howled as Smith was launched for three consecutive sixes by Roy.

By the end, as the rain fell, the whole of Edgbaston was telling the world that cricket is coming home.

This was a complete display by England, who were magnificent with the ball, sharp in the field and dominant with the bat.

Woakes (3-20) and Archer (2-32) nipped the new ball around on a full length. Archer trapped Finch lbw with his first ball, Woakes got one to climb that Warner fended to first slip, then bowled Handscomb through the gate.

Archer also left Alex Carey needing stitches from a blow to the chin, but the left-hander recovered to make 46 in a stand of 103 with Smith

Given their team for this tournament only really came together at the last minute, it is to Australia's credit that they made the semi-finals with such ease.

But here they were ambushed by England and now must regroup before the Ashes begin on this ground on 1 August.

As his team-mates crumbled around him, Smith stood tall, blocking out the abuse to accumulate with his trademark fidgety efficiency.

Indeed, had Carey hung around, England's task could have been difficult but, after he departed, wickets fell with regularity.

When Smith was beaten by Buttler's throw to become the eighth man out, he shook his head all the way to the pavilion, unable to conceal his disappointment.

To stand any chance, Australia needed early wickets and when they failed to materialise, they were powerless to prevent Roy's awesome hitting.