With high success in business and banking, Chandra Prasad Dhakal, chairman of IME Group, has been contributing to his roots through tourism and education 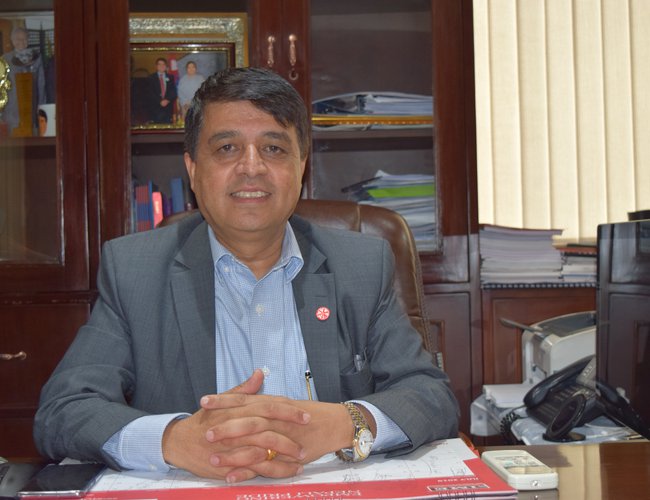 “You can't connect the dots looking forward; you can only connect them looking backwards. So you have to trust that the dots will somehow connect in your future. You have to trust in something - your gut, destiny, life, karma, whatever,” said Steve Jobs, a pioneer of the microcomputer revolution and founder of Apple.

As said by Jobs, destiny guides individual’s life knowingly or unknowingly. Banker Chandra Prasad Dhakal is not an exception. Achieving high successes in business and banking one after another, Dhakal has also pushed work to the roots by his destiny.

With over two decades of journey in business, Dhakal entered into the banking sector through International Money Express (IME), the first remittance company, to bring foreign remittance to Nepal with it. 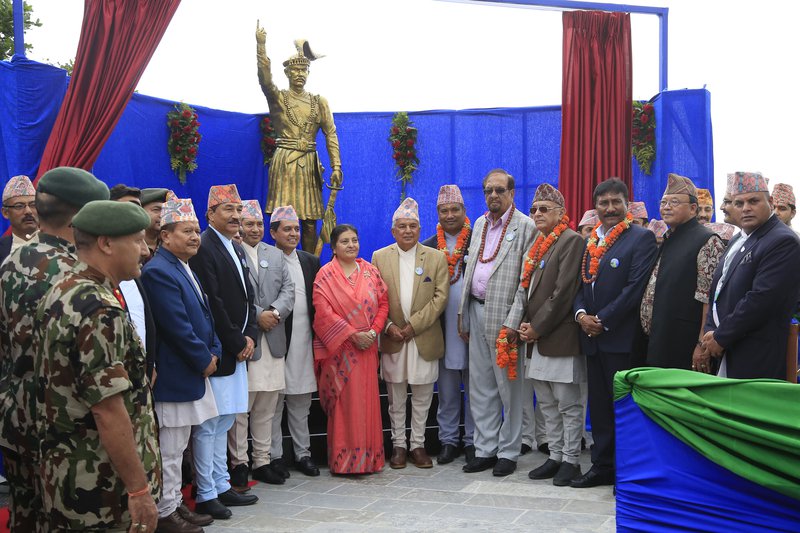 Established in 2001 in Nepal and Malaysia, the aim of IME was to facilitate the migrant workers in Malaysia to send their earnings home. This arrangement has not only become productive, but also paved the pathway to institutionalizing the formal means of remittances.

As he has been marching ahead, Dhakal has also moved to serve his roots. Initially, he did not know that he was also going to contribute to history and his root. After the completion of construction of Chandragiri Cable Car and recreation park, entrepreneur Dhakal has realized that he needs to do something to promote the history of Chandragiri Hill and its dreamer.

Constructing the statue of Prithvi Narayan Shah, founder of Nepal at Chandragiri Hill as an important portion of the Hills, Dhakal added important things at the recreation center and tourism hub.

Whether it is just a coincidence or a matter of destiny, his support went to the name Prithvi in both areas. These two works are connected with his roots as well. Prithvi Hiranya Secondary School has helped his brother, sisters and other relatives of his village to get education at the door step. 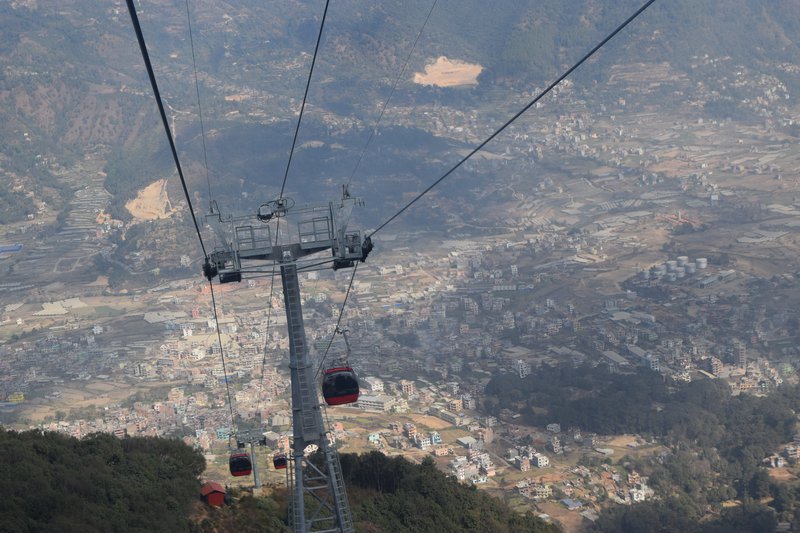 After the construction of the new building, his father’s name has been inserted in the middle of the school’s name, which is now Prithvi-Hiranaya Secondary School.

Dhakal's support to the construction of the school building has reasons. At 16, he lost his father and the school played an important role to transform the fate of his brother and sisters.

In his journey to contribute to the historical and national cause, along with his younger brother Hemraj Dhakal, President of Republic of Nepal Bidhya Devi Bhandari also backed him.

It might be a historical coincidence that President Bhandari is from the family of Kazi Kalu Pande, equivalent to prime minister’s commander-in-chief of Prithvi’s unification force. Remaining in isolation in the history for long, local people have also constructed the statue of Kazi Kalu Pande in the northern Indrasarovar hill.

The school building was commissioned by Dhakal, and his younger brother Hemraj Dhakal as a tribute to their late father, Hiranya Prasad Dhakal. Late Dhakal was a known philanthropist in Baglung.

The 16-room school building offering disabled-friendly infrastructure, a computer lab, science lab and e-library was constructed at the cost of Rs. 62.4 million. The school, the sole secondary school of Amalachaur, runs up to class 12.

“The school has a great attachment with my family. Because of this school, my brother and sisters were able to secure higher education and become a success in business. The school has also helped educate people living there and contribute to the nation,” said Dhakal. 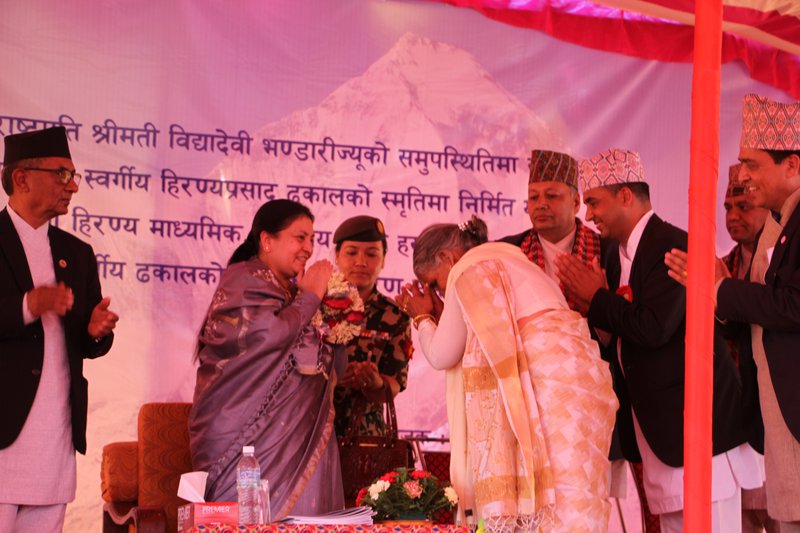 With the construction of the new classrooms and new labs, the school is now at par with the school buildings of urban areas of Nepal. Chandra’s contribution has helped revive the school.

At a time when Chandragiri Hill, which has connections with founder of Nepal Prithvi Narayan Shah, was virtually in ruins, Dhakal’s move to construct the statue has not only boosted his own business but revived the glorious period of Nepal’s history.

Along with the construction of modern cable car to connect the top of the hill and well built resort, Dhakal also constructed a statue of Shah and the Bhaleshwor temple, where it is said that Shah was blessed for his success in conquering different principalities.

Destiny of Dhakal seems to have fixed where to connect him. Although there are other mountains which are equally potential for his cable car venture, his eye was fixed at Chandragiri.

Initially, Dhakal did not know that one of his Dhakal kins advised Prithvi Narayan to march for unification from the point he was considering to build a massive venture. 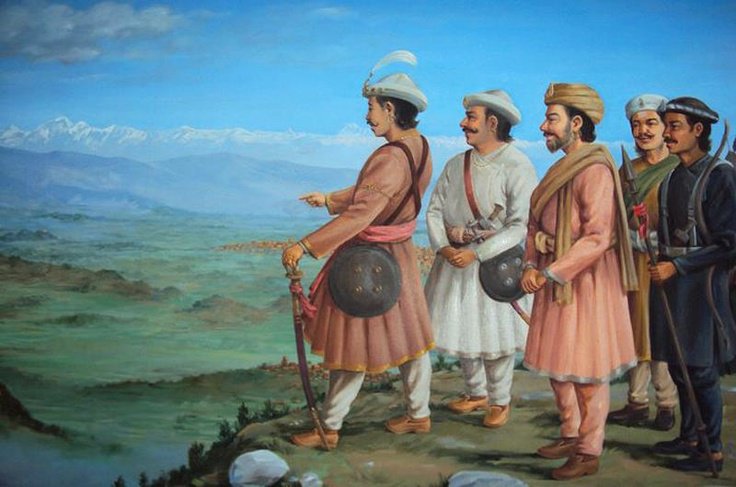 Historically, Chandragiri was a hill from where Shah had got the inspiration for unification of Nepal. Ludwig F. Stiller, in his English translation of Dibyaupadesh, also highlighted the importance of Chandragiri.

Frustrated and angered by his father-in-law in Makwanpur, Shah left Makwanpur to his state Gorkha with a group of advisors through Chandragiri. At the top of the hill, two of his advisors Bhanu Jyotisi and Kulannda (Dhakal) Jyotisi showed the green and big valley and suggested he make the valley a part of Gorkha. In his Dibyaupadesh Shah revealed that he had made the determination to launch the march for the unification of Nepal from the hill.

“Companions to me were Bhanu Jyotisi, Kulandnda Jyotisi, and others of my family. From Chandragiri’s top I asked which is Nepal? They showed me saying, that is Bhadgaon, that is Patan, and there lies Kathmandu. The thought came to my heart that if I might be king of these three cities, why not let it to be so. At this same time, these two astrologers said to me, O King, your heart is melting with desire. I was struck with wonder. How did they know my inmost thoughts and speak to me?

“At the moment your gaze rested on Nepal you stroked your moustache and in you this came to pass. You will be King of Nepal.”

“When we decided to build a cable car with all recreation facilities and resorts, there were options before us. However, we chose Chandragiri for our venture,” said Dhakal. “Only after visiting the venue, we found so many things of historical importance with the hill.”

Whatever the relations, Chandra Dhakal’s dream not only promotes a destination but also helps to preserve a history of founder of Nepal. For a businessman like Dhakal, enlisting the historical figure was risky for his business as constructing the statue when there was a hostile political group in power. Taking a bit of a risk, Dhakal constructed the statue at a low profile. However, one powerful media group continued a campaign to drag his venture into controversy. 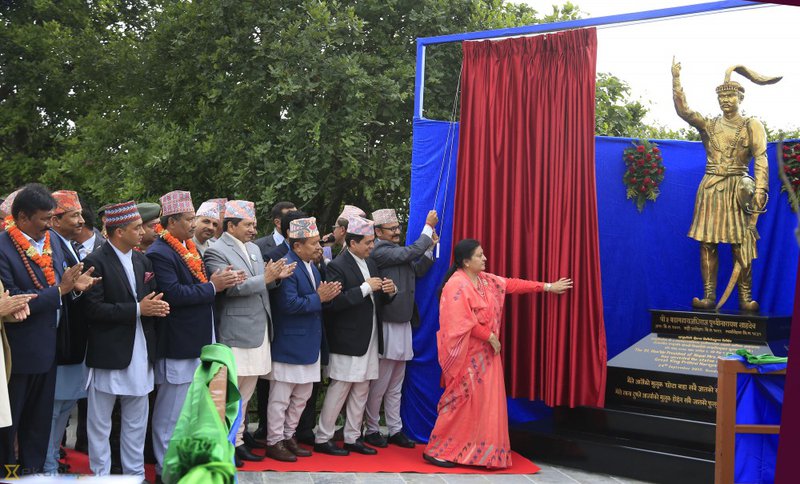 However, he found some likeminded persons in his mission. President Bidhya Devi Bhandari, who was also a great admirer of history, encouraged him in his mission. Despite opposition from the group, President Bhandari unveiled the statue, which is one of the major attractions of Chandragiri Hill.

Modest and innovative, fifty-four years old Dhakal has been promoting business as well as contributing for social and historical cause. As it is said destiny is no matter of chance. It is a matter of choice. It is not a thing to be waited for. It is a thing to be achieved. Although both the choices were not easier for a businessman like Dhakal, he chose a difficult decision but in favor of his roots.

The construction of Chandragri Recreation Center and Resort project was conceived in 2007 by Chandra’s brother Hem Raj Dhakal. He shared his vision with him to set up an integrated tourist destination in Kathmandu, which would create countless memories for millions of Nepali families. 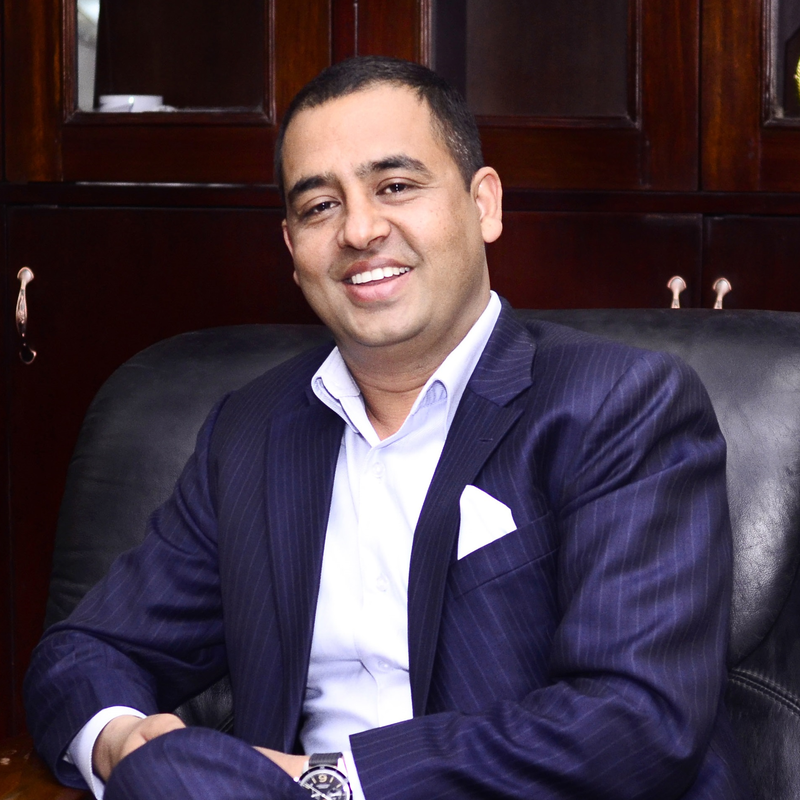 Chandra Dhakal backed his brother Hem Raj Dhakal’s dream to construct a venture with a great retail and food outlet, exciting play zones for children, and a cultural and historical experience within the beautiful valley of Kathmandu and an international standard resort with halls to hold international conferences.

As junior Dhakal was in Malaysia, he was inspired from the Genting Highlands of Malaysia. After returning from Malaysia, he registered with Department of Industry an eco-tourism industry.

“During our stay in Malaysia and visiting Genting Highlands several times, we had some sort of feeling why not we develop this kind of fun park close to Kathmandu,” said Chandra Dhakal.

On 11th July 2010 this project was recognized as national priority project from National Planning Commission. On 7th September 2011, 36 hectares of land was leaseheld from the Government of Nepal for 40 years.

This made way for a detailed techno economic feasibility study by Mahindra dated 8th June 2012. Eventually, on 5th September 2012 the environmental impact assessment (EIA) study report by Ness was approved by Nepal Government.

On 14th June 2013, the contract for building the cable car system was awarded to the world leaders in cable car manufacturing Austrian company, Doppelmayr.

In 2015, contractors broke ground and the construction was underway. Eleven towers were built along the 2.5 km stretch of wilderness, with a steep elevation of 1,000 meters from the bottom station to the top.

By the end of July 2016, the cable car installation and the construction of the parking areas, the bottom and top stations, view tower, restaurants & bar and the stunning Bhaleshwor Temple were completed.

On 8th August 2016 a soft opening of Chandragiri Hills Ltd was organized. On 24th September, 2017, it became another historic day for Chandragiri Hills Ltd, as well as the country, when President of Nepal, Bidhya Devi Bhandari unveiled the statue of Prithivi Narayan Shah.

In just a couple of years, Chandragiri Hills Ltd has become one of the most visited retreat sites in Nepal. With activities to entertain and amuse guests of all age groups, the location now stands as the ultimate fun destination. But the project has no intentions of stopping just there.

By the end of 2018, a 100-room boutique resort, an adventure park including two, 900 meter, ziplines and a natural history exhibition gallery, exploring the bio-diversity and the environment of the area, were to be inaugurated.

Born in a middle class family in Baglung district, Dhakal, a humble person, has by now established himself as a leading entrepreneur of the country in a relatively short span of time. Dhakal is the chairman of the IME Group and vice-president (corporate) of Federation of Nepalese Chamber of Commerce and Industry.

IME Group of Companies is one of the fastest growing business conglomerates in Nepal, which has its remarkable presence in banking, money service, IT, trading, hydro-energy, travel and tourism, cable car and infrastructures.

Dhakal is the Honorary Consul of the Republic of Indonesia to Nepal since 2010. He is currently looking forward to explore business expansion in association with Nepali as well as foreign companies 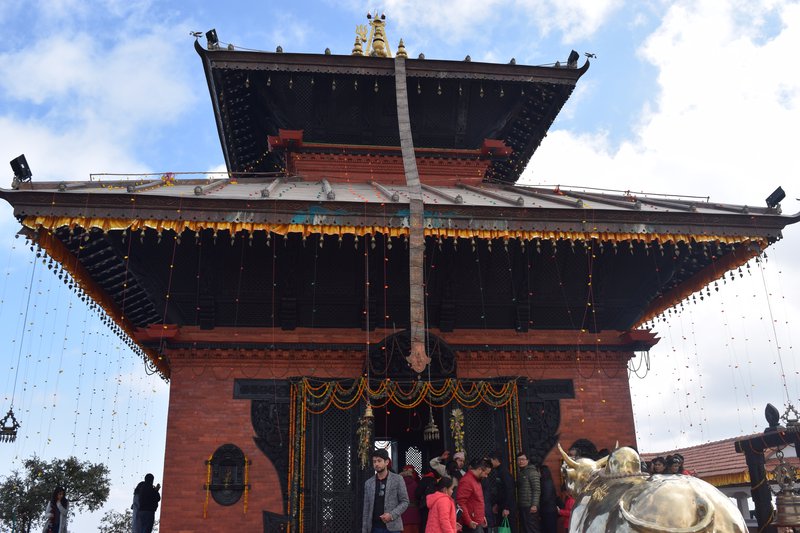 Although Chandra Dhakal has been marching on the path of progress, Dhakal has also been supporting the uplift of the country’s sites of social and historical importance.