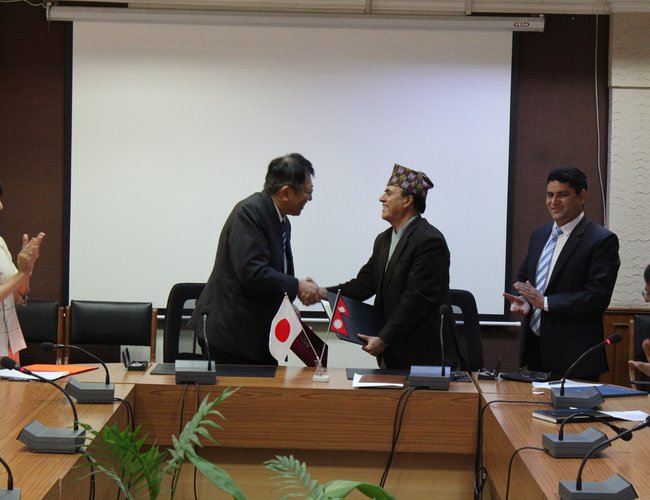 Masamichi Saigo, Ambassador of Japan to Nepal, and Rajan Khanal, Secretary of the Ministry of Finance of the Government of Nepal, have signed and exchanged three sets of Notes today on behalf of their respective governments.

Yumiko ASAKUMA, Chief Representative of the Japan International Cooperation Agency (JICA Nepal), and Shreekrishna Nepal, Joint Secretary of the International Economic Cooperation and Coordination Division (IECCD) of the Ministry of Finance, have also signed and exchanged a Grant Agreement for the implementation of this Scheme.

The JDS Project Grant is designed to support human resource development of friendly nations through accepting highly capable, energetic, and young government officials into Japanese universities and strengthening the partnership between recipient countries and Japan by utilizing human relation chains to address future global needs. Phase I of JDS is in the final completion stage under which sixty Nepali government officers have already been dispatched while twenty are in the process of pursing their studies in Japanese universities. In the meantime, Phase II of JDS is in the implementation process with the addition of an infrastructure development component and doctoral degree program as per the request of the Government of Nepal.

Japan has also been assisting in the implementation of the School Sector Development Program (SSDP) from 2016.

Ambassador Saigo said that education was an investment in human capital and the foundation for a nation’s sustainable social and economic development. He also stressed that through education the cycle of poverty could be eradicated in the long term. SSDP is considered as an important vessel to enable Nepal to achieve the Sustainable Development Goals and to become a middle-income country by 2030.

Ambassador Saigo hoped that the SSDP would improve the quality of education, school management and institutional capacity and the access to education for children in marginalized communities, based on SDGs policy “No one left behind”.

The Embassy of Japan expresses its firm belief that the objectives being envisaged by above Projects will be achieved, thereby further strengthening the existing cordial relationship of friendship and cooperation between the people of Japan and Nepal.

JICA adds School Sector Development Program( SSDP) started implementation from July 2016 and aims to consolidate gains from previous reform programs and continue crucial reforms needed in the school education sector through the SWAp modality. The overarching mission of the SSDP is for Nepal’s schools to produce the needed human resources to elevate the country’s status from a least developed country by 2022 and to reach the goal of achieving the status of the level of the middle-income country by 2030. The goal is thus to provide all citizens with the opportunity to become functionally literate and numerate, and to develop the life skills and knowledge required to enjoy a productive life, taking into account the diversity of context and the federalization of the country.

Purpose of the SSDP is to improve the equity, quality, efficiency, governance and management of the education sector. SSDP focuses on capacity and knowledge enhancement of both students and teachers by developing relevant teaching and learning methods and materials that ensures quality development. Lately, SSDP also focuses on strengthening school-level disaster management and resilience to develop school as a conflict free zone.

As present education policies and sector plan (SSDP) of Nepal target to meet Sustainable Development Goal 4: “Ensuring inclusive and equitable education and promote lifelong learning opportunities for all”. It targets to ensure that all girls and boys complete free, equitable and quality of education leading to relevant and effective learning outcomes while adhering to tackling disparities in remote area. This Grant Aid contributes in achieving the SDG and sector program targets.

Development of Education sector in Nepal is one of JICA’s top priorities and it assures to continue its support to this sector for effective implementation and output.

JDS offers 2-year scholarship for masters degree to 20 government officials under 4th batch of first phase and 20 scholarships for masters and 2 for PhD under 1st batch of 2nd phase of Nepal who are engaged in formulating and implementing socio-economic development planning and to study at a graduate school in Japan for Master’s Degree, with an objective to resolve development challenges in Nepal by supporting the young government officials and others who are expected to become leaders in Nepal for obtaining master’s/ doctor’s degree in Japanese higher educational institutions, thereby contributing to strengthen the bilateral partnership.

As per Japanese FY 2016, 2017 & 2018, 60 government officers from Nepal enrolled in eight (8) Japanese universities and 20 fellows of the 1st batch already returned back to Nepal last year after completion of their study. This will be the 4th year / batch for Nepal under first phase project and 1st batch for second phase project. JDS has been implemented in 15 countries since 1999 for supporting the human resource development. Until March 2018, more than 3,970 officials have studied in Japan under this scholarship.

During the occasion Asakuma further expressed that, “We are hopeful all the scholars will contribute to the development process of Nepal once they come back after completing their education in Japan.” This agreement expects to expand and enhance the foundation for bilateral relations between Japan and Nepal by means of accepting them in Japanese Universities as overseas students.