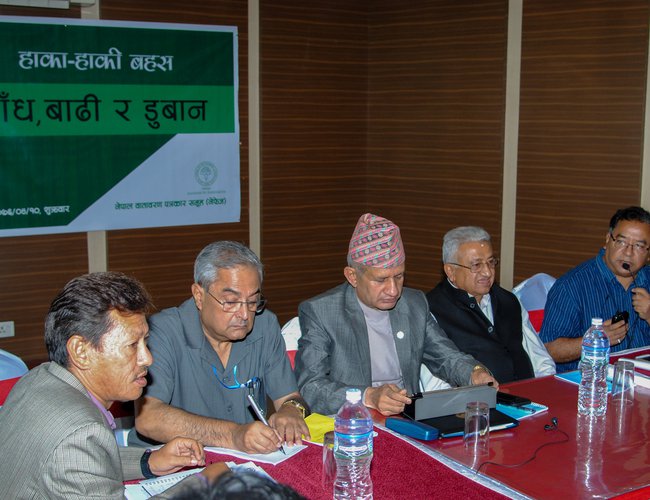 Last Friday, 26th July, Nepal Forum of Environmental Journalists (NEFEJ) organized an interaction program on flooding in Nepal's Tarai from unilateral construction activities in India. Deputy Director General of Irrigation Pradeep Thapa described in detail the results of the along-the-border inspection by the Joint Committee on Inundation and Flood Management (JCIFM). Commenting on the JCIFM work, foreign minister Pradeep Gyawali promised to raise the matter via diplomatic channels with India; and former ambassador to India Deep Kumar Upadhyay asked India to be serious about the problem. That was because the physical harm to India from such mismanagement would be as much if not worse due to the sheer density of population on that side.

Adding weight to that view, former chair of NEFEJ and senior journalist Rajendra Dahal described how, while India's one-sided construction of embankments along the border had caused us harm, it had not benefitted India either. He was recalling the padyatra in the Bihar flood plains organized for a team of Nepali journalists (who are all now very senior) two decades ago by Nepal Water Conservation Foundation (NWCF). What was significant was that, while the refrain that Nepal was cheated in the Kosi-Gandak treaties has been a public perception given in Nepal for the last six decades, none of those journalists participating in the padyatra came back to say so in their subsequent writings. They all described in graphic detail how the Bihari peasant had been most cheated by Indian hydrocracy's blind worship of the inappropriate technology of embankment building.

In my intervention, I described my "toad's eye" as well as "eagle's eye" sciences approach to the problem. NWCF has an over two-decades experience of interacting with Bihari and UP activists on the ground doing padyatras along marginalized rivers such as the Rohini from Gorakhpur to Butwal, West Rapti from Rolpa through Baharaich and Maharajganj districts to Gorakhpur as well as along the Kosi and Gandak flood plains. Flood insecurity in the Indian doabs is outmatched by insecurity induced via bad embankment building. This technology works in arid zones where it prevents a river's rising flood waters from spilling onto adjacent lands; it does not work – indeed is environmentally damaging – in high rainfall areas such as the Ganga flood plains, including the Nepal Tarai.

The reasons are two-fold. First, during the monsoon, water does not inundate land from river overflow alone: because there is excess rain everywhere, much of the water in the fields comes directly from the rain itself and not from any stream channel (which is additional only, especially from seepage along the earthen embankments when river levels are high). That water from precipitation, once the river level recedes, would have to drain back into the river channel; however, embankments prevent it from doing so with the result that the land remains water-logged, unfit for growing crops and filled with water hyacinth. In Bihar's Kosi flood plains, more land has gone out of production with water logging – land that would give three crops with no fertilizer – than has come to be irrigated under its Kosi project. This has forced many Biharis into poverty and forced them to migrate to the urban slums of Delhi and Bombay seeking menial labour.

The second reason is that Himalayan rivers carry not just water but also much sediment from natural erosion which, over the many millennia, created the lower Ganga plains from the Tethys Sea including today's Bihar and Bangladesh. Embanking their two shores ("jacketing the river") and constricting its spread along its wider natural flood plains means that the sediment is not spread out but settles within the narrow confines of the embankments raising the river bed level. The Kosi, "jacketed" along all its 125km length to its confused confluence with the Bagmati and the Ganga at Kursela, has seen its bed level rise some four meters higher than surrounding land.

Such earthen embankments are bound to breach, as has happened eight times in Bihar and as happened in August 2008 with Kosi at Kushaha in Nepal even as Prachanda was inauspiciously taking his oath of office, and even when the river was only at 60% of the average flow for the month of August. It displaced some 65 thousand in Nepal and 3.5 million in Bihar. It clearly demonstrated that the problem was not river flooding but inappropriate technology coupled with Indian contractor corruption. Indian scholars such as Indu Bharati, writing the Economic and Political Weekly in 1991, estimated that as much as 27 billion Indian rupees was scammed per annum in these embankments that contributed to getting embankment-supporting mafia get elected to high office. But then the false narrative of "Nepal releasing floods to UP and Bihar" keeps getting parroted by Indian politicians at the highest level. When in trouble, admit no guilt but shift the blame to the upper riparian!

At the "eagle's eye" level, I remain till today the only Nepali water minister to have made an official visit to Bihar, despite resistance from Lainchaur which stymied efforts to repeat the visit to Lucknow. That visit helped our water experts from the Department of Water Induced Disaster Prevention and WECS to explain to their Bihari counterparts the nature of the problem and to the Bihari public that Nepal "has no dams whose gates we could open to flood Bihar". On the contrary, Bihar's building allegedly east-west roads but effectively 4-meter high dams blocking natural north-south drainage and with "bridges that have gates on them" along the Nepal border, often encroaching on no-man's lands, have caused severe damage in Nepal Tarai.

Such transboundary engagement among officials, academics and socio-environmental activists from both sides, something NWCF has been championing since 1993 as "Patna Initiative", is essential to good transboundary water collaboration. This is crucially needed because, while India has many good water experts with whom our water experts could work, they are unfortunately sidelined in transboundary discussions: India's South Block (i.e. MEA), poorly knowledgeable about actual hydraulics or socio-environmental impacts, enjoys absolute veto power over the agenda and outcome. They see the problem only through a security (aka, paranoia) lens and not through other development concerns. The result has been a sorry state of impasse, Mahakali Treaty being only the latest sad example.

Most water problems, whether within Nepal or between Nepal and India, are what are called "wicked problems", i.e. problems where there are disagreements on the very definition of problem itself, let alone its solution. It is because water is life itself that it touches every aspect of economic activities that we humans are involved with or environmental services that we have benefitted from over the ages. They are intertwined with complex social and political interlinkages affecting things in unexpected areas, but often have to be dealt with by siloed organizations and narrow reductionist disciplines.

The answer would lie in a nexused approach which trans-disciplinary organizational structures could address, if they are allowed to address them at all. This quagmire is most apparent in all proposed projects in Nepal and between Nepal and India where hydro projects are treated only as electricity producing ventures and not multipurpose ones giving benefits to many sectors such as irrigation, flood control, navigation, fisheries etc. This as true of Budhi Gandaki and West Seti as with Pancheshwar or Karnali Chisapani and Kosi High. Lumping all development costs of Budhi Gandaki or Melamchi onto one sector (electricity for the former and drinking water for the latter) makes them economically unviable; but departmental silos are loath to cooperate with other sectoral departments and see that as encroachment on their turfs. That needs to change

We do have in Nepal such a mechanism that would help do that since the early 1980s, the Water and Energy Commission; but it has been more misused as a shunting yard for unwanted senior civil servants than used for its creative potential. All that is required are two simple measures: first, a permanent presence of joint secretary level senior staff from all the twelve water and energy relevant ministries represented in its board deputed to WECS and preparing inter-departmental policy papers; and second a rotation of chairmanship among all other ministers than just limiting it to the energy minister alone. Such a reform was attempted in 2003 but did not reach a logical conclusion, and subsequent governments have not shown any inclination to pursue the matter. If the current foreign minister can get PM Oli to get him to chair WECS for the coming year, and then use its institutional support to begin diplomatic dialogue with India and its MEA that enjoys veto power over all transboundary waters, maybe we may see a solution emerging.

Nepal Was And Will Always Be A Country That We Will Be Proud To Continue Our Cooperation By Hanan Goder-Goldberg 2 days, 10 hours ago

The Opening Of The Airport Is A Milestone In Nepal’s Aviation And Tourism Sectors By Arnaud Cauchois 5 days, 19 hours ago