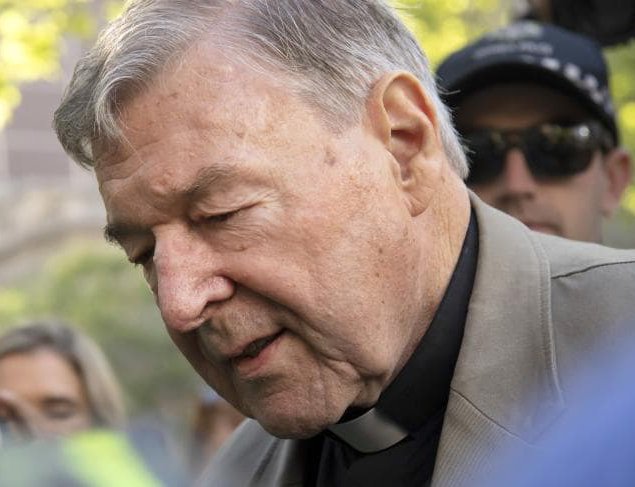 Crowds have cheered after George Pell, once Australia’s highest ranking Catholic, was told he’d be going back to prison to serve the rest of his sentence.

George Pell has lost his bid for freedom with his appeal against child sex convictions dismissed in court this morning.

By a majority of two to one, Victoria’s Supreme Court dismissed the appeal ordering Pell to “return to prison”.

“He will continue to serve his sentence of six years’ imprisonment,” Chief Justice Anne Ferguson said.

“He will remain eligible to apply for parole after he has served three years and eight months of the sentence.”

Pell sat and listened intently as Chief Justice Anne Ferguson read out her reasons for rejecting his appeal. The 78-year-old looked dejected as he hunched forward to hear his appeal be denied.

Head bowed, with his grey hair hanging loosely around his face, the cardinal was led out of the courtroom just before 10am to serve out the rest of his jail sentence.

Chief Justice Ferguson told the court the judges had found the complainant “believable”, dismissed an animation created by Pell’s legal team about the cathedral abuse as biased and slapped down Pell’s argument that it was impossible for the abuse to have occurred.

Justice Weinberg did not side with Chief Justice Ferguson or Justice Maxwell, stating “there was significant and in some places impressive evidence suggesting that the complainant’s account was, in a realistic sense, impossible to accept”.

Despite this dissenting view, Pell’s appeal was denied.

Cheers were heard from inside the courtroom as dozens of people outside, watching the appeal on the livestream, listened to the judges slap down Pell’s appeal.

Pell shared the courtroom with the world’s media, his own supporters and the family members of the two boys he was found guilty of sexually abusing in 1996.

Pell’s entire family were in the courtroom, including his brother. Chrissie Foster, the mother of two Catholic Church sex abuse victims, was also inside.

Pell’s main argument that he put to the three judges — Chief Justice Anne Ferguson, Court of Appeal president Justice Chris Maxwell and Justice Mark Weinberg — was that the abuse simply didn’t happen, that it was impossible.

Chief Justice Ferguson denied that argument, telling the court the survivor was “clearly not a liar”.

“Justice Maxwell and I accepted the prosecution’s submission that the complainant was a compelling witness, was clearly not a liar, was not a fantasist and was a witness of truth,” Chief Justice Ferguson said.

“Throughout (the complainant’s) evidence, the complainant came across as someone who was telling the truth. He did not seek to embellish his evidence or tailor it in a manner favourable to the prosecution.”

She said the case of Pell had “divided the community” but the jury verdict from his original trial had been unanimous.

She said the three judges had watched all the recordings from the trial, including the recorded interview with Cardinal Pell and the evidence given by 12 of the 24 witnesses.

“Those recordings went for more than 30 hours and we’ve watched them more than once,” she said.

Child sex abuse survivors and their supporters screamed with joy as Pell was told he was going back to jail.

David Mulholland shed tears as he spoke of his gratitude for the three judges that upheld Pell’s conviction.

“Ecstatic,” he told news.com.au. “Finally the pious religious spirit has been seen through by the expert appeal judges. Bless them, I love them.

“They saw through the lies.” Robert House, a survivor of sexual assault, said he was “exhilarated”.

“It sets a standard for people who put themselves in positions of power and abuse that power by raping children. They’ll get caught and they’ll be put behind bars.”

He said it was a “very, very special day” and that he would continue to fight as Pell prepared to take the matter to the High Court.

China And The U.S. Are Edging Toward A New Cold War: Kissinger By Agencies 1 week, 4 days ago

The Pre-Trump World Won't Come Back By Agencies 2 weeks, 6 days ago

US Formally Withdraws From Paris Agreement By Agencies 3 weeks, 3 days ago

We Were Beating China At A Level They Haven't Been Beaten Before: Trump By Agencies 4 weeks ago